Game Time!
I've been perusing Kickstarter as I enjoy doing and have found 3 games that I think look neat. Two are physical board-and-card games, one is a video-game. We've got one about super-heroes (you know I love my heroes), a sci-fi computer game, and a cool-looking game about running a vineyard, of all things. Let's talk about the most unique one (wine-making) first.

Viticulture: The Strategic Game of Winemaking

Check them out here.
I stumbled upon this one as I was looking at games and Kickstarter pointed out the folk behind this are  located in St. Louis of all places! Now, Missouri is a bit lacking in famous vineyards so it is wise of them to have the game take place in Tuscany.

You have workers and other characters who help with your vineyard and the game goes through seasons so it won't get dull. It's a quicker game, taking just 45-60 minutes to play (something I like) and I was especially intrigued by this bit:

"In many board games--especially Euro-style games, the category Viticulture falls into--your opponents can ruin your strategy, or even your day. We want people to walk away from Viticulture feeling great, so we made sure that there is healthy competition and conflict in the game without any of the cut-throatedness that can ruin someone's gaming experience."

I like the idea of a board game that has you working hard against someone, but won't have those instances where someone goes and ruins all the hard work you did in one fell swoop. I don't know too much about wine, but I do know I enjoy good board games and this looks like one worth playing. I've backed it and you can too--getting the game for just $35.00, quite a good price for a physical game with all is assorted parts. 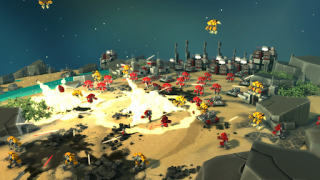 Check them out here.
If you know the Total Annihilation series of games, this should be a bit familiar as it is inspired by said series. It's a real-time-strategy (RTS) game with its intriguing hook being how you are engaging in interplanetary warfare. The idea of working on multiple planets to achieve my universe-dominating goals just sounds so intriguing, and who doesn't love a good fight between sci-fi ships and robots?

The game is also mod-friendly which I know lots of people look for in their computer-games and its take on the RTS genre looks promising. You can fund this Kickstarter with nothing more than an Andrew Jackson (20 dollar bill) and get a copy of the game for your PC or MAC--quite the steal. 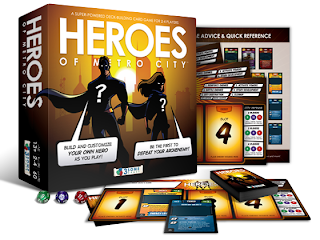 Check them out here.
I love comic books, and I love super-heroes, and I enjoy games a lot. That makes this Kickstarter quite appealing to someone with my tendencies. You draw cards and make particular moves with other players whilst fighting off baddies. I love anything that lets me play at being a super-hero so there is no question I want to check this out.

As for funding it, for just one dollar you can gain the ability to print our your own versions of the cards and such, enabling you to basically, "print and play," which is quite cool. If you're like me and want the actual items and the snazzy box they come in you're going to need to spring for at least the $50.00 option. It isn't cheap or exorbitant, so that's okay. Plus, for various higher donations you can get extra stuff like future expansion packs or Kickstarter exclusive cards. I'd say it looks like some good fun.

Those be the Games
All of these look quite promising and should be good fun when they come out. If you like one in particular why not go and fund it? I would/did!
Posted by David Charles Bitterbaum at 9:00 AM