This is One of Those Posts Without a Focus.

I know I literally just did a post with links, and this isn't that. This is more a rambling post about Marvel sucking, and Brian McKnight making sure I'm ready to learn.

Lame Marvel Comic #1
I just flipped through this and was glad I didn't ever plan on buying this series. It's the, "Versus," series of comics that tie in with, "Avengers Versus X Men," series and feature nothing but two big fights each issue. Yeah, nothing but mindless fighting. That could be fun, but not for $3.99. Especially not with little, "fun facts," trying to be cute interspersed in the story: 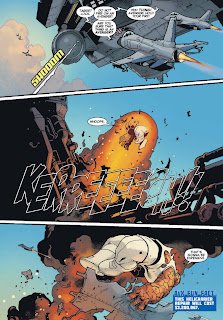 Maybe when all the issues of this are on sale in the quarter-bin I'll give it a look-over. Otherwise, no thanks. Also, in what world would Magneto lose to Iron Man in a fight? Magneto is the bee's knees yo!

Teach me, Brian McKnight!
This has been making the rounds on the internet, television, and radio (albeit edited for those last two formats). Basically Brian McKnight is joking (I think) about putting out an, "adult," mixtape with one of the songs being where he teaches a woman how, "Her pussy works," because he bets she didn't know, "That it could squirt." Yes, I'm serious.

You could find this gross and slightly offensive but this is Brian McKnight we're talking about, and that man has a voice that is already like sex so is it really a stretch for him to get a tad raunchier than his other romance songs? Listen, laugh, and you be the judge. I found a Youtube version without the ads you have to watch before the main video. You're welcome:
Yeah, I'll buy a copy.

Lame Marvel Comic #2
There had been a Marvel comic called Battle Scars that was coming out for the sole purpose of giving Nick Fury a son who was black. Why is Marvel doing this, you may ask? Well, in the Ultimate Marvel Universe Nick Fury is black and looks like Samuel L. Jackson and they based the Avenger's movie character who popped up in most of the other movies on him...so I guess Marvel wants their normal comic-Universe to be more like the movies.

So basically over six issues a man named Marcus Johnson learns he is actually the bi-racial son of a lilly-white Nick Fury and a fellow black spy he fell in love with. Then, Marvel shoe-horns Mr. Johnson into the role of being the head of SHIELD and reveals that his actual birth name was--wait for it!--Nick Fury: 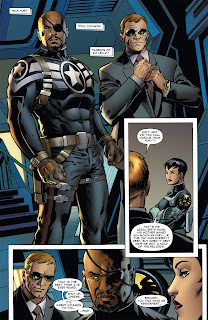 Oh, and they are bringing in Agent Coulson from the movies as his friend. That's besides the point though of how hard Marvel is trying to force this. Even if you ignore the uncomfortable racial tension of telling a black man, "Sure, you've lived your whole life as Marcus Johnson, but now some old white man who is your birth father you never met until recently gave you this name so you have to go by it," Marvel is still pretty much making a ham-fisted gesture not at diversity, but at making their, "real," universe look more like the movie one.

Needless to say I'm pretty glad I didn't buy this comic during its run either considering it was just Marvel's excuse to go, "Hey, we've forced a black Nick Fury into the 616 world now too, never-mind that in reality someone probably wouldn't appreciate being told they have to now go by the name of their estranged father!" Sorry I brought that up again, it's just really weird.

So Ends This Truly Random Post
I hope you enjoyed my ranting and raving, because I really wasn't sure what point I was trying to make other than that Marvel put out two bad comics this week and Brian McKnight is eager to teach ladies how their genitalia functions. I suppose after all my DC-bashing lately for their incredibly stupid, "Before Watchmen," idea I needed to give Marvel some wrath too.
Posted by David Charles Bitterbaum at 10:43 AM