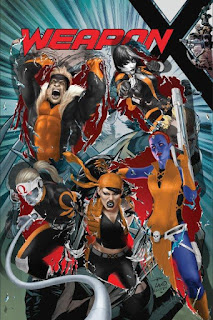 Look at that above this text. Seriously, just look at it. God, that's some atrocious artwork. I know I say Greg Land is pretty miserable as a comic illustrator, but good God! I mean seriously, that was submitted to a number of people around the Marvel office as the cover to be used to promote the latest version of a, "Weapon X," comic-book and everyone who saw it apparently said, "Yep, that works." I mean, I thought the idea was sometimes comic-books have crappy interior art but you try to have an impressive cover in the hopes it will engage potential buyers of the book.

This is possibly going to be the cover to the debut issue and this is the polar opposite of a good first impression. The artwork itself is hideous and the characters don't look like they were even all drawn together so much as illustrated separately and then photoshopped into one image--it doesn't feel cohesive at all. There seems to be the idea they are breaking through glass or barbed wire or something too, but that's messy as well. It looks like someone with rudimentary drawing skills and even less ability using photoshop wanted to make an extreme piece of art and failed miserably. If I may use an old meme... 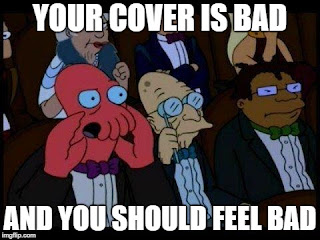 Seriously though, the only cover worse than this that comes to mind is that one with a Green Lantern vomiting rage-blood. This isn't quite that bad. It is close though.
Posted by David Charles Bitterbaum at 10:20 PM