Jurassic World: Evolution--Impressions Some Hours In 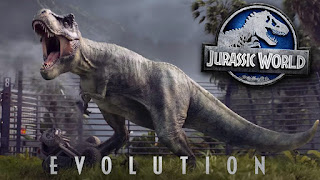 I love Dinosaurs, I am a fan of (most) of the, "Jurassic Park/World," films, and I have an affinity for video-games when I'm able to play them. Therefore, back a number of years ago I had a lot of fun playing a game titled, "Jurassic Park: Operation Genesis," on my Xbox. That game now is old and actually kind of rare, but I had hours of entertainment building my own Jurassic Park full of dinosaurs big and small back in the past. Hence, when it was announced some months ago we would be getting, "Jurassic World: Evolution," and be able to design our own Dino-filled parks again in this era of extra-fancy consoles and computers I got excited.

As much as I enjoyed, "Operation Genesis," the graphics could be lacking and the dinosaurs looked awfully basic. As long as this new game managed to be a solid park-building sim and remembered the main reason we're all here--dinosaurs--it should be fun, right? Well, having played a good deal of hours of, "Evolution," I can say from what I've seen so far it is a really exciting game only occasionally bogged-down by annoying and somewhat unneeded micro-management. 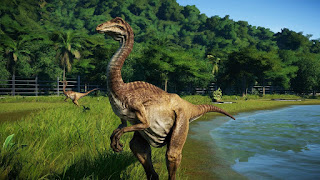 "Jurassic World: Evolution," tasks you with going to various islands with unique aspects (bad storms, losing money) and making a profitable, safe-ish, and enjoyable place for guests. You start out on one island, can leap between unlocked ones at any time to put advancements gained at one on another, and otherwise get to test out various designs and ideas on separate islands (or a sandbox-style island where you can craft whatever you like that apparently unlocks later-on). You build the fences, breed the Dinosaurs, and place them in environs that appeal to the creatures based on how they feel about trees, grasslands, and other species present. I've made good-sized pens full of social herbivores, smaller areas with grass-eaters less eager to be crowded, and crafted some electrified zones to hold the more dangerous and carnivorous creatures such as medium-sized meat-eaters and the small but deadly Velociraptor.

To keep guests further sated I've built gift shops, fast food buildings, t-shirt stores, and of course deluxe hotels to encourage greater park attendance. Plus, putting down some emergency shelters in case of a Dino-escape happens helps put people at ease too. The guests actually aren't really a focus in the game, however. You can't click on them or anything, they are just various clumps of people who you look at genralized stats about to know where to place some shopping. Guests are just a means to an end in this game, honestly, and that end is more and more incredible Dinosaurs. 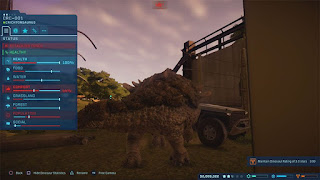 The game doesn't tell you much about guests or bother to even render them that differently, but Dinosaurs are a polar opposite. Every Dino looks so lovingly crafted in its appearance it is positively striking. The detailed stats about how each specific one is feeling lets you know everything about what they like and don't like. It is breathtaking to zoom-in or drive the ranger jeep around and just gawk at these beings. They are simply polygons on a television screen/computer monitor but the most important thing, "Jurassic World: Evolution," needed to do right in order to succeed is what it excels at--making these Dinosaurs feel utterly real and breathtaking. The awe I feel watching a herd wander around by a pond and socialize with one another is wonderful, and something I keep coming back to when the when less-pleasurable aspects of the game rear their head.

When, "Jurassic World: Evolution," gets caught-up in duller details it makes me testy. For example: the park needs to be powered, which requires constantly laying down power lines, substations, and keeping your power stations going. It becomes an annoying mini-game of figuring out where you can place lines and such to keep things functioning. Once everything is working you then have to send expeditions out for fossils, examine those fossils in the lab to unlock dinosaurs, and otherwise click around a lot of screens just to be able to breed a damn Dinosaur. Then, you can tweak Dinos genes in interesting ways, but if you want to do that you need to research everything--another screen--and you maybe are too busy to research gene modifications because you're trying to develop the ability to treat some new disease making all your creatures sick, but you lack a medication, and once you finally have a cure you have to click each Dinosaur one at a time for your rangers to shoot treatment darts at--unless you upgrade your ranger station to allow more items on their, "to-do list." But wait, that requires extra power, which brings us all the back to that pain in the ass power station we need to keep functional! All I wanted to do was enjoy hatching some new Dinosaurs, but sometimes the game clearly gets in its own way in regards to it best feature. 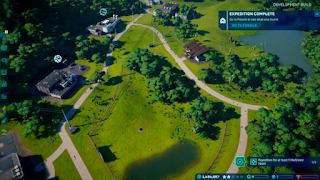 The annoying barrage of screens you have to muck-around with in order to simply grow some Dinosaurs is a big pain, and little things that would make it easier aren't present that should be--perhaps your rangers could automatically re-stock Dinosaur-feeders instead of you always having to order them to do it or driving the jeep yourself? Still, once you finish the busy-work and get to just marvel at your creations as they frolic much of the irritation melts away...at last until your raptors escape for the second time in 15 minutes and your stupid helicopter-team keeps missing in their attempts to tranquilize them whilst guests panic.

During the time I've spent playing, "Jurassic World: Evolution," on my PlayStation 4 I've unlocked various islands, bred exotic dinosaurs, and tried to come up with the perfect way to connect a monorail track, to name a few activities. I have had a great deal of fun without a doubt. I also have at times felt like I was doing tedious busy-work or been perturbed at design decisions that make things unnecessarily complicated and which could otherwise be pretty simple. That said, "Jurassic World: Evolution," is a gorgeous game full of exciting moments that only are occasionally tempered bydull bits here-and-there. A few flaws don't ruin an otherwise delightful time, and I'd recommend trying this game out for sure!
4.5 out of 5 stars.
Posted by David Charles Bitterbaum at 6:17 PM