The Release and Review Process for, "No Man's Sky," is One Big Mess

There is a game that people are very excited for known as, "No Man's Sky," developed by Hello Games. It has been in development for years, slowly building up anticipation. Fandom is at a fever-pitch for this new title to come out and (if I'm reading things right) it will either:

A. Be like the coming of a Messiah onto our planet to save us all and unite the world in joy.

B. Be a huge disappointment that results in people losing their faith in all of humanity and being reduced to sobbing naked in the streets.

I sound like I'm joking, but the hype-train has seriously been in overdrive for, "No Man's Sky," to the point that when a reporter simply reported (you know, what you do for your job) how the game would be delayed fans flew off the handle and threatened his life...until the developer confirmed that report was true and fans flew off the handle again and threatened the developers' lives--which makes no sense, why do you threaten to kill the people making the game you claim to be so excited for? Logic people, use your logic. 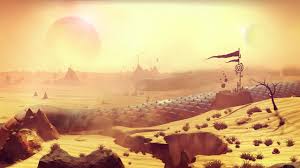 The game is supposed to come tomorrow now, and as we sit on the eve of its release people are talking more about a new mess that has developed than their excitement for the game itself. The problem lies in that the developers did not want to give-out review copies of the game to people as they had a big day-one patch that they felt altered the game enough that it shouldn't be reviewed until such a patch was in place. Putting aside how generally when reviewers have to wait until a game comes out to review it that is a big red flag, a whole separate issue has made this a hilarious debacle. You see, some stores already had copies of, "No Man's Sky," and were breaking the rules and selling it to people. The first person to make a big fuss out of this was a man who claimed he bought the game for the tidy sum of 1,300-ish dollars and began posting videos of himself playing the game. This made fans froth at the mouth with jealousy and the developer freak-out to the point that the man in question posting the videos admitted he felt bad and took them off Youtube...but enough people have copied the videos they persist on websites like Pornhub (it's a long story).

Now, as the release creeps ever closer many individuals and video-game websites actually resorted to going to stores breaking the street-date so that they could finally play the damn thing and begin forming some concrete opinions. Yes, websites like Polygon and Kotaku resorted to buying copies of the game that technically shouldn't be out yet because the developer itself wouldn't give them copies--ignoring the fact that the cat is out of the bag and people are in fact playing, "No Man's Sky," as we speak. It is the most idiotic series of events possible and has overshadowed much of the excitement for a game that I will fully admit I am excited for, but am trying to also make sure I keep realistic expectations about. As I understand it the press finally got review copies today, so there's your bandage over a bullet-wound. 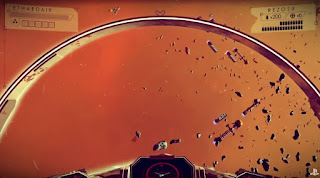 I do kind of get it. I mean, the developers want reviewers to experience the, "True," game so they felt like holding-off on giving people review copies until the patch was done--with day-one patches being a pretty common thing nowadays. They even are wiping the servers so that any progress the early-players have made is erased. Still, if people can grab a copy of the game you can't really stop them from playing it and reviewing it. Once that shit is shipped what happens next is for the most part out of your hands. With a game this absurdly hyped someone is going to break the rules and sell it early, and after that many other people are going to do so too. It is going to happen, and the people at Hello Games have done a terrible job of handling this series of events.

Honestly, I just want, "No Man's Sky," to be a rip-roaring space adventure game where  I can enjoy landing on a planet, exploring, and flying off into space to discover more neat stuff. I am positive tons of people are going to feel let-down because the degree of excitement and hope is off the charts. Plus, this fiasco of copies leaking and reviewers being denied copies has dominated the coverage even more now than the game itself. Once, "No Man's Sky," is actually officially released tomorrow however we all can start forming our own opinions and hopefully this wreck of a release will fade into being a footnote in the history of the game.
Posted by David Charles Bitterbaum at 12:56 PM