What is this "Ello" Folk Keep Jabbering About? 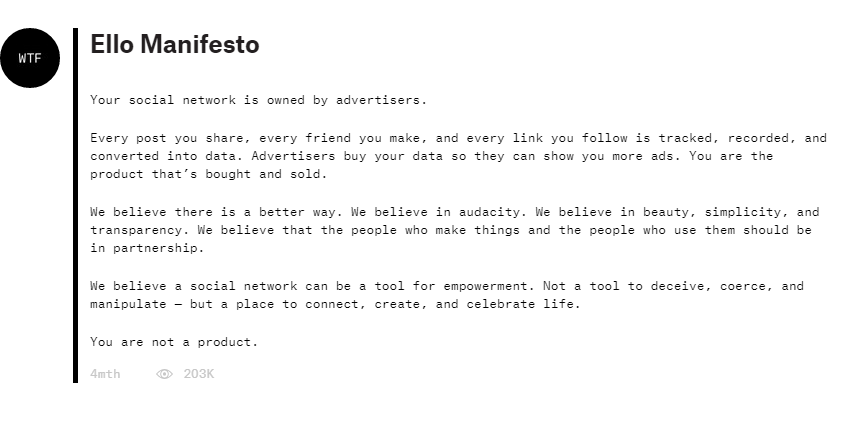 Ello is like if Facebook and Tumblr had a baby, except that baby was a marsupial in that it only came out somewhat developed and officially "existed" but really needed some more months to finish developing. Ello is at that point where it has been "born" but isn't really "done." Should you desire another example, Ello is currently a full recipe but presented to us half-baked. The question is even if its only half-baked could Ello still be considered a "tasty" good? After messing with it off and on for a number of days I can answer that question with, "Eh, maybe?"

Don't get me wrong, the idea behind Ello is amazing. Its a social network that says it will forever be ad-free and will never, ever sell your personal data as other social networking sites are prone to do. It says it isn't setting out to be an anti-Facebook or anti-anything, but a person could see how that is what it's driving at. The thing is, Ello does have investors, so how does it plan to make money? Apparently in the future there will be premium features users can pay for, but as that is a bit of a ways away I won't worry about it now. Speaking of, "now," what is there currently? Some interesting features and a lot of stuff I and others would want missing, that's what.

Ello's design-style is like if a modernist and minimalist were told to invent a social network and then went utterly wild. The format is a monochrome wonderland with pictures people have posted serving as colorful snowflakes of sorts decorating the otherwise somewhat barren landscape that is your pseudo-feed on Ello. A person can make a post of any length they like and put it up, with others then "liking" it or commenting just as with Facebook. One interesting idea to this concept of following people--and the biggest thing Ello has going for it--is that you can take people you've followed and make it so that they appear in an information feed where you see what your "friends" are up to or a general "noise" feed for people you want to follow but wouldn't consider important enough to call a friend.

People have no idea what feed you've put them in, just that they are being followed, so it is fascinating to think you get the ego-boost of being followed, but could very well be relegated to a bunch of people's, "noise" section. It is great Ello has this, because there ain't much else popping-off, as the kids' say these days (Note: I am fully aware the kids don't say this anymore, they now say things like, "Bae.") Seriously though, once you try to do something that is easy on Facebook but currently impossible on Ello you will understand. You know what? I think this calls for us to have, "Example Time!"

Example Time!
You know how we all like our privacy on Facebook and make a big deal about it, going as far as getting mad when we have to adjust settings to make our accounts totally private? Well, there aren't "private" accounts yet on Ello so anyone can just follow you and whatever musings you have. You can block someone, but I'm not sure how useful that is right now other than you won't have to worry about them commenting on your stuff anymore. Ello is working on creating private accounts, messaging, and a, "Not Safe for Work" tag for sexually explicit content(so that you will be able to/can post as much nudity as you want, unlike Facebook if that floats your boat) among other things, but as it stands now you can't even have a YouTube video embedded in there. It is like I said, all these ideas, but the cake is still baking and at the moment a bit of a goopy mess.

It just isn't the irony that Ello will keep your account private from advertisers but forget other users that irritates me some, either. Another example would be that while it is enjoyable to no longer have all the ads, game requests, or such that makes Facebook look awkward, but how in a weird paradox we find that despite its clean look Ello can feel a bit clunky to use. When I tried to make my first post/sorta status-update I couldn't figure out how to post it, instead creating all these breaks and boxes. It looked weird. I eventually figured it out but couldn't understand why something as simple as posting my thoughts was done without a second's hesitation on Facebook but caused me so much annoyance on Ello. I encountered the same difficulty when I went to try and put an image up too, and as I consider myself someone pretty decently-versed in technology I don't think this was a case of being like the old Grandpa who can't figure out how to use the inter-webs.

More Time to Cook
Other than the clever system of, "friend," or, "noise," Ello is really at the moment more of a cool idea that is fun to talk about than an actual functioning social network. It has that sheen of being brand-new and still invite-only, but I honestly wonder if it will be able to sustain itself after this early burst of excitement and press wears down. I actually do hope Ello does okay, as if it is given more time to grow in its metaphorical marsupial-pouch/cook in the oven I think some of the promised features will make it more of a full-fledged product. Right now it is just a thing to brag about being aware of to your friends who you want to feel cooler than (seriously man, have you ever worn a t-shirt in a non-ironic way?) or a way to try and impress people by offering to send them an invite code if they listen to your demo tape/mp3.

In closing, if you keep hearing your friends or the media talking about Ello, you shouldn't get too jealous that you lack an account on it. The whole thing at the moment just has an air of, "We're so much cooler than Facebook," while not actually working to be better than Facebook, just a bit snazzier-looking and with a somewhat political manifesto of being against all the internet advertising. Maybe in a few months when more features are in place Ello will really be something to chat about, but for now its that metaphorical marsupial, emerging into the harsh light of the sun only to realize it needs to crawl back into the safety of a dark pouch and develop for several more months before its truly ready to step out and be involved in our daily lives. Whatever the case, if you get on Ello you could always follow me as I occasionally use it by searching for @davidbitterbaum. Just don't expect me to do much until Ello gets more fully-featured.

Thanks is Due To This Person

I would like to extend a special thanks to Jason Church AKA DJ Churchdogg for sending me the Ello invite I needed to try it out. You can check out his official Facebook page here and if you ever need a DJ for your event in the area of Saint Louis or Saint Charles I would recommend him as he is both a good friend and a great DJ!
Posted by David Charles Bitterbaum at 10:52 AM