Reviews of Two Graphic Novels With "Dark" in Their Title, One Dark Fantasy and the Other Sci-Fi

"Beautiful Darkness" And "Darklight"
I've recently read two original graphic novels. One is the originally-French and translated into English "Beautiful Darkness", a dark fantasy about magical creatures who find the real world is not that wonderful a place at all, and "Darklight" is a science-fiction story about the end of the Universe and the attempts made by humanity and two other alien races to prevent it. Both stories were good but I preferred one over the other.

Within "Beautiful Darkness" a fairy-like race appears to live in the imagination of a young girl, but once she dies they find themselves living outside her body in a forest, surrounded by creatures that have little-to-no-qualms about eating the pixies whilst they also squabble among themselves to increasingly violent degrees. If "Beautiful Darkness" is like a Grimm Fairy Tale meets "Lord of the Flies", "Darklight" is your usual somewhat generic science-fiction story laid out in comic form, but with enough interesting and unique aspects to rise above being a solid but unassuming piece of fiction--with thanks due to a few clever ideas and the solid art of Piotr Kowalski. Let's delve into a more detailed review of both, starting with "Beautiful Darkness".


"Beautiful Darkness", emphasis on the "Dark" 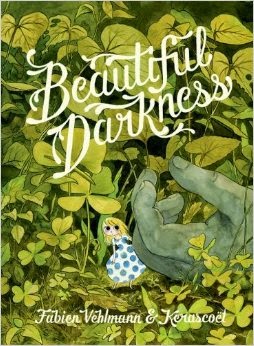 "Beautiful Darkness" was originally written in French by Fabien Vehlmann and illustrated by the duo known as "Kerascoet. Adapted into English by Helge Dascher and John Kadlecek, this story follows various characters at times, but I would say the main character (or at least the person who gets the most attention) is the princess Aurora. A kind person, Aurora seems a bit too wrapped-up in wanting to live a fairy-tale life that she doesn't quite realize such a happy option no longer exists until much later in the story when things have gone from bad to worse, to an absolute worst.

The happy colony of pixies seems to have lived in the imagination of a young girl who suddenly dies (with it never made clear exactly how, but hints are given) and find themselves thrust out of her mind into the real world. Whilst using the objects she was carrying for shelter along with her decomposing corpse (I told you this was dark), the pixies slowly go from mostly happy-go-lucky creatures to murderous monsters at a rate just slow enough you never feel there was a jolt from "nice" to "evil" in the characters so much a slow descent into brutality.
The pixies try to make friends with the forest creatures but discover most of said animals would rather eat them, and it is telling that the one forest animal who seems to genuinely want to be friends with the Pixies--a mouse in a dapper outfit who only can screech but has an intelligence hidden by his lack of verbosity--finds himself brutally murdered eventually by the very pixies he tried to befriend. As I've said though, the only thing worse than the animals of the forest are the pixies themselves. It isn't surprising that the ones who seem to have more genuine kindness to them die out before the conniving and arguably sociopath-like members of their "tribe".

Aurora seems to be the only pixie who lives long that wants to be "good" but as the story wears on even that hope disappears as all she holds dear either turns on her or dies to the point she becomes bitter and vengeful. This isn't necessarily Aurora's story however as much as an indictment of how we as a people claim to grasp to our forms of culture and civility, but know full well that if the "magic" of life were to disappear we would probably become little more than monstrous animals, hence my earlier reference this story evoking feelings of "Lord of the Flies" at various points.
What really helps sell this point of reality intruding into happy fantasy is the artwork, which has the surreal quality of looking like a beautifully-done children's story meets a horror-comic thanks to the weird mixture of cute and otherworldly pixies encountering realistically drawn forest animals along with their living in and around a somewhat disgustingly-detailed corpse. With the writing and its slow-ish descent into violent misery from otherwordly-joy and the art's wonderful accompaniment in such tonal-shifting, the result is a story that is as twisted as it is good-looking.

As "Beautiful Darkness" delivers to us a cautionary tale of how no matter how good life is things can go wrong, it also provides a feast for the eyes with its odd mish-mash of the cute and grotesque. This is definitely a bizarre story, and something I would highly recommend to fans of dark fantasy or anyone who likes their fairy-tales with a heaping serving of uncomfortable brutality. "Beautiful Darkness" is without a doubt a quality story and worth checking out. Therefore, I award it a very-high rating of...
4.5 out of 5 stars. 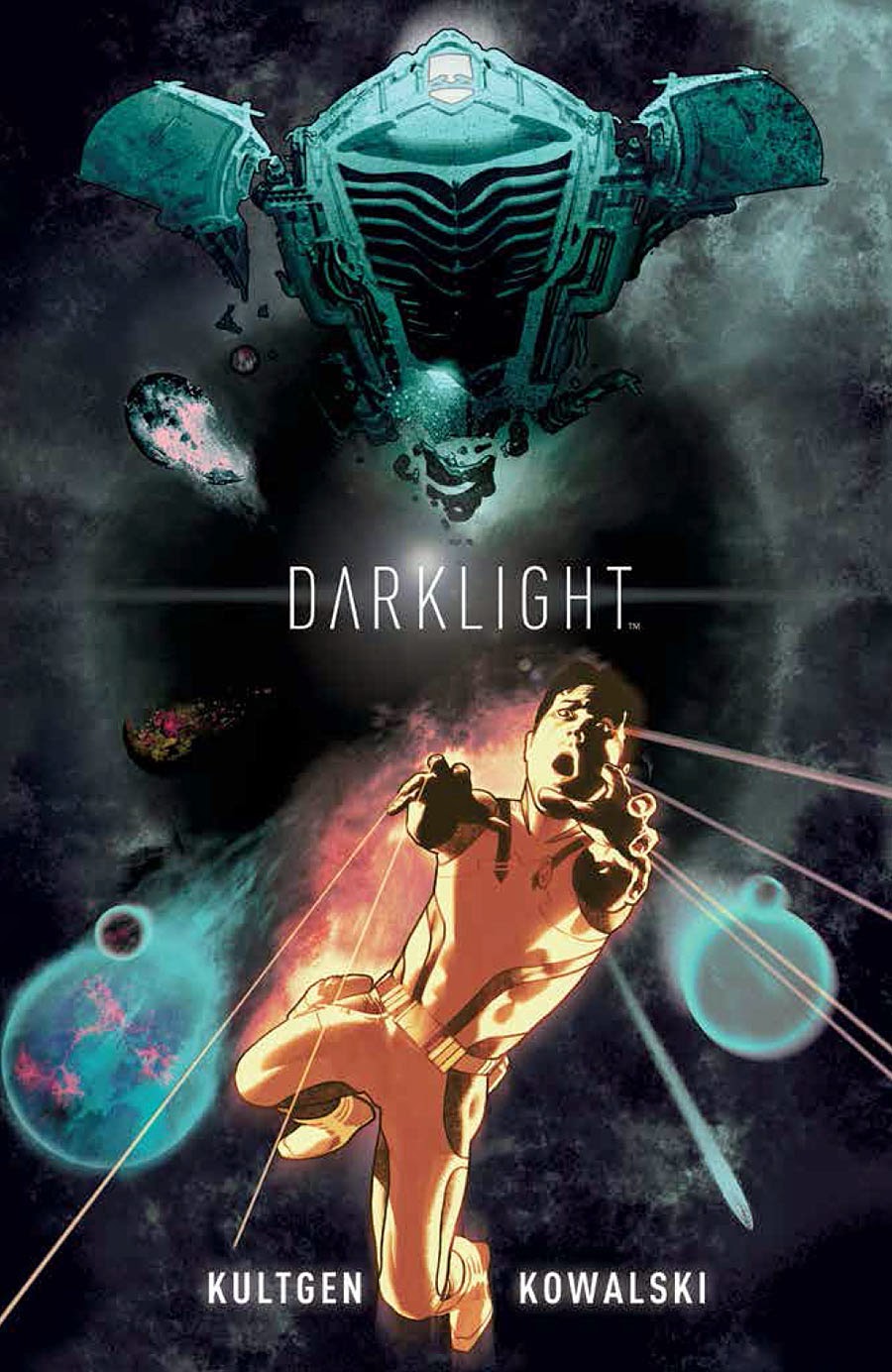 "Darklight" has many aspects that make it appear to be a mostly bland genre piece of sci-fi literature. It has a dying Universe, alien races that normally don't get along banding together in an effort to save us all, a space-ship made-up of humans along with these alien races, and of course there are lots of flashy space-battles. The biggest thing working against "Darklight"  is that our protagonist is so dull I can't even remember his name (I just looked it up, he's named "Rhodes". He basically operates as little more than a cipher for all the other characters who are much more interesting to able to express themselves counter-to. This allows us to understand more about the two alien races, the Luminids and Duron, but results in our protagonist being little more than a brick-wall who delivers the occasional bit of exposition.

Up until towards the end of the book we don't really understand much about Rhodes or his motivations, and he really is just a dull entity in a book made-up of much more interesting characters. That's what really saves the book from being a dull piece of standard sci-fi though, the other characters. Reading about the Duron and Luminids in a prologue illustrates how they are very interesting and thought-out races, with complex histories that would make fascinating comics all their own. The Duron character we meet on the ship, Cora, is an interesting individual who has a mixture of pride for her people, and conflicting emotions due to developing a romance with a human. I especially found the Luminids and the character on the ship who is one of them, Andros, to be especially intriguing.
The Luminids operate as a sort of hive-mind that provides a sense of unity to every individual Luminid who makes it up, Andros had to leave that to join the ship and his mixture of anger at that along with a robot-like obsession with logic makes for an interesting individual as over the course of the story Andros starts to realize that maybe it is better to be an individual and not completely happy as opposed to lacking a mind of his own and experiencing constant joy. It is no stretch to say Andros and his people were the most enjoyable aspect of "Darklight" for me. Writer Chad Kultgen turns in these solid writings about characters, but it is artist Piotr Kowalski who really brings his "A-game" to the proceedings.

Kowalski has been providing excellent art on the comic "Sex" with Joe Casey, and his style is so uniquely bizarre that it suits a story about space quite well. His European-influenced style creates comics that despite the somewhat generic story-telling look wonderfully unique and independent-styled. The plot may resemble that of a big-budget and somewhat-dumb space opera, but Kowalski provides the kind of drawing that gives it a look of a small art-house film that happens to have some pretty impressive special effects.
Kowalski gives the Duron an imposing look and the Luminid a design that is both at once famillair in body-shape yet clearly quite foreign in all other aspects of appearance. Elements of the story that would maybe feel pretty dry with a lesser illustrator pop off the page with Kowalski's skillful work. It really is impressive stuff and that makes it all the more depressing that other than in a few elements (such as the intriguing nature of the Luminids) that the writing can't measure up to the beautiful art.

Despite a story that I find a bit lacking, there are elements to the tale of "Darklight" that rescue it from being a simple re-tread of sci-fi story-elements, and Kowalski's impressive art gives the story a feeling of legitimacy that it maybe doesn't earn, but sure at least appears to be deserving of receiving (thanks to the gorgeous art). With these pros and cons in mind, I can say that "Darklight" is overall a bit above average, but I can't help but wonder if a slightly better tale would have taken this from a graphic novel I consider "good" to one that could have been "great". With all of this considered, I give "Darklight" a fair rating of...
3 out of 5 stars.

I enjoyed both stories, but clearly liked "Beautiful Darkness" more--but not in a way that  discounts "Darklight" so much as shows that it is always good to read a wide range of material, as I could just as easily read a fantasy story I find lacking and a sci-fi yarn that I consider incredible. With that in mind, I propose you check out both books as regardless of what you think of the stories you'll love the art, and depending on your tastes you may prefer "Darlight" over "Beautiful Darkness" for all that I know. After all, I'm just some chump on the internet telling you what I think, and at the end of the day its more important what you think...right?
Posted by David Charles Bitterbaum at 12:25 PM