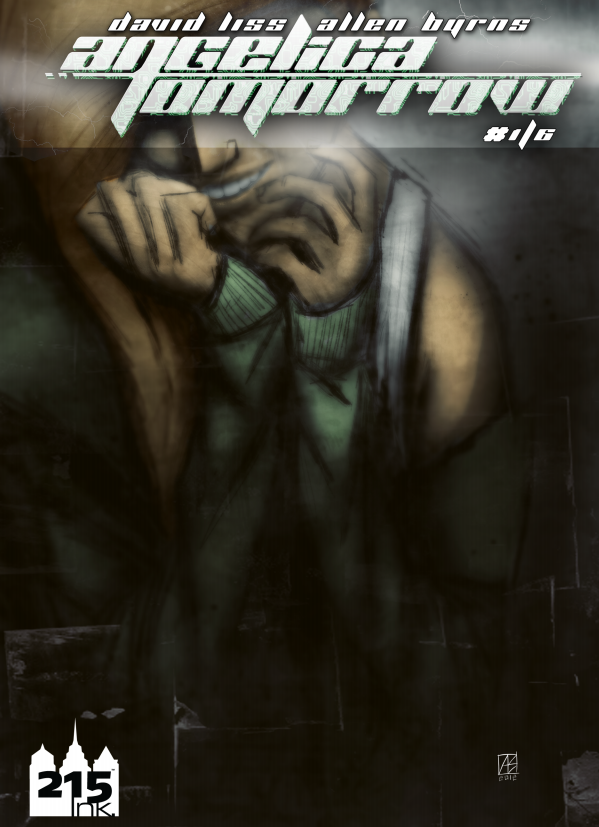 Those of you who have enjoyed my site for awhile are probably familiar with friend of the blog, David Liss. I've interviewed him before about prose-writing and "Black Panther" back when he was doing that title for Marvel and I was enjoying it a bunch. A bit ago I made a post when he and publisher 215 Ink made an announcement about a new comic in the works from Liss and artist Allen Byrns, "Angelica Tomorrow". First coming out digitally and then in Trade Paperback, I wasn't sure what to expect from this comic but thought it sounded intriguing in its description of a "slice-of-life" tale meeting-up with something killer-robot-esque. I figured I would check it out when it debuted.

Well, I've now read the first issue and I can say that I did indeed quite like "Angelica Tomorrow". Liss provides us with a narrator in the form of George Williams, a high-school student who used to have it all before a car accident left him paralyzed, bitter, and often drunk thanks to booze acquired from the older brother of one of his only two friends.

Out drinking one evening with his friends, once they take off George witnesses some kind of plane crash, with a responding officer arriving on the scene and then being hideously murdered by some sort of female-appearing robot. Before it can kill George however it finds itself reverting to a "base personality" as it calls it, and becomes a much friendlier and somewhat amnesiac version of itself. The lack-of-memory aspect isn't too annoying, because Angelica knows she is some kind of robot-cyborg, she just isn't sure where she came from and how dangerous she possibly is.

This results in the rest of the story, with its interestingly weird mixture of  themes. It has the usual overtones of a high-school tale, featuring George just trying to suffer his way through classes, but incorporated into this is the story of a dangerous human-machine hybird that currently seems to be in a less aggressive-mode, but who knows for how long? It really does result in a sort of "Ghost World" meets "The Terminator" feeling as it had been described to me before reading it.

The varying tones actually works out well, but the major question remains, why doesn't George just try to get as far away as possible from this machine-human hybrid knowing what it is capable of? The story slightly addresses this, saying that George is basically so lonely and without anything to care about that having anything be "his" in a sense is enough to give him a reason to live, even if that aforementioned reason to live might end up murdering him.

The other thing that nagged at me is how this first issue already starts to tell us some facts about Angelica, with a scene between a scientist and NSA agent arriving into town with plans to search for her/it. I actually liked there being some more mystery to just what Angelica is and where she comes from, so having the story reveal this early on that she's basically a failed experiment removes some of the mystery and makes this a standard, "Science and the Government went too far and look what it wrought!"-type of Frankenstein's monster brought about by mans and woman's hubris.

The art is quite good, giving off a strong Ben Templesmith-type vibe. It is both at once moody and oppressive, giving us a good feeling of the hopelessness Ben feels. The way Angelica is drawn and colored as a bright and happy standout in a world of dark and moody colors helps to express how this android is both at once extremely pleasant and friendly, but with that scary edge of turning back into a monster at any moment.

The minimalist and eerie style of the artwork goes with the story well when things are gruesome (such as when Angelica is at first a violent killing-machine), but feels a bit tonally-off during the quiet nicer scenes of bonding between Angelica and  George. Then again, with the story having such different tones that somehow work together I'm not sure how exactly there could have been an art-style to suit all the potential moods. Therefore, it is at least good that Byrn's style works so well for the more alarming and scary scenes. 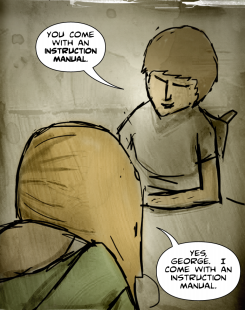 All-in-all I would say this is a very strong start with only a little that bothered me, such as the too-soon introduction of the scientist and NSA agent, but there was much I enjoyed such as the artwork and good chemistry between George and Angelica that shows an interesting mixture of friendship, flirtation, and fear (on George's part, at the thought that Angelica could turn violent again at any moment).

I would definitely recommend checking this out if you enjoy quirky or scary stories, or tales that merge both genres expertly. You can find yourself a copy of the debut issue of the digital-first "Angelica Tomorrow" on Comixology, right here and I hope you enjoy it as much as I did.
4 out of 5 stars.

Note: A digital copy of "Angelica Tomorrow" was provided to me by David Liss for review purposes.
Posted by David Charles Bitterbaum at 10:42 AM