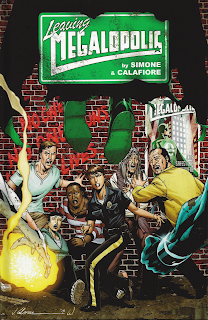 Megalopolis, (Once) a Good Place to Call Home
Megalopolis is a nice city and a popular place to live as all the heroes who call it home make it feel all that much more safer. The thing is, something has caused all the heroes to go crazy and now they are killing everyone within the city. If you try to hide, they will find you and obliterate you, if you try to fight back they will rip you into pieces, try to leave the city and they will definitely destroy you with laser beams. Basically all the regular citizens can do is try to survive, and hopefully escape somehow. "Leaving Megalopolis " focuses on a group of these folk with a bit more time spent on our sort-of protagonist, Mina, and what caused her to end up in this mess. How did this comic come about though?

Indie Enthusiasm and Professional Experience
Leaving Megalopolis is a mixture of the indie-eagerness and professional-sheen. It has folk who have done a lot of work in comics such as the excellent writer Gail Simone and the talented artist Jim Calafiore. Especially known for when they worked on the popular series, "Secret Six" for DC, Simone and Calafiore are by no means some unheard of duo pitching their idea for a comic on Kickstarter in the hopes enough people are intrigued to support them--there is a pedigree.

However, while that may have helped get it some attention, Leaving Megalopolis is done in that indie-Kickstarter fashion all the way. Simone and Calafiore had a great idea for a comic, put it up on Kickstarter along with a detailed plan about how the book would come to fruition, and hoped enough people would be interested to fund the book. She and her team worked out printing, figured out who got what, offered snazzy backer-rewards, and otherwise really put in the effort that those successful Kickstarter campaigns are known to do.

Well, the funding was immense and Gail was able to reunite all of the former her Secret Six crew, such as the aforementioned Calafiore she created the project with and colorist Jason Wright who was brought on when a "stretch goal" was achieved through even more funding. Various cool extras were added too as the project became more and more successful such as every copy of the comic/graphic novel coming in a hardcover, with more and more story pages added to further flesh-out all the events of the comic.
So, the comic was easily funded and everyone was excited, but do Simone, Calafiore, and Wright deliver the goods? Generally, yeah, they do.

Some Great Stuff and Some Less-Than-Great Stuff
First off, the book and its productions values are beautiful. This could easily be something put out by a big publisher between the writing, art, paper quality, coloring, etc. I also quite enjoyed the story but oftentimes the elements I didn't care as much about seemed to get more attention, and the parts that I was more interested in seemed to be the aspects only briefly touched upon. For example, I didn't think we would actually learn what had caused all the heroes to go bad and become murderous, yet a fair amount of page-space is spent discussing whatever entity/force/creature caused them to become the monsters they are.

I was extremely interested in the "flash-forward" bits of the book where we see various governmental agencies discussing the confusion over what happened in Megalopolis , all the mistakes that were made, and otherwise injecting some fascinating political intrigue into how the rest of the nation might respond if a city full of heroes suddenly became a liability instead of an asset. Unfortunately, too little time is spent on this, and the question of if there are other heroes to potentially send into Megalopolis to try and fix things is never even touched upon. It feels kind of like an opportunity is missed to further explore this aspect of the story.
The characters we meet range from moderately interesting to being little more than cannon fodder for the now-evil heroes. I liked that we never actually hear things from the heroes point of view unless they speak to the regular folk, as it keeps things a mystery as to why everything has gone bad--until, as I said, the story reveals it to us and kind of leaves you wanting a better explanation than, "An evil otherworldly thing did it."

Seeing how people react when what was once their safety net turns into something trying to murder them is another interesting part of the story, with it illustrating how easy it is for seemingly nice people to become as monstrous as the very things hunting them in their effort to survive.

The End?
There is great art and some really interesting scenes, but then at other times things drag a bit and the big reveal of what caused this mayhem is kind of lame. This results in a comic that is by no means amazing, but still quite good, and worth reading when it comes into a wider release (as I assume it eventually will) and isn't just available to those who backed it on Kickstarter or buy it on Ebay from someone else.

"Leaving Megalopolis " has flaws, but also contains enough quality that I would recommend it to anyone who is a fan of the creators (Simone, Calafiore, and Jason Wright) or enjoys the popular trope of what happens when our heroes turn against us. The "1" on the side of the book's spine makes it clear there are plans to make future books, and I've had enough fun that I'll definitely at least check out/fund volume 2 when the time comes. If a comic is enjoyed enough I want to read more of it I suppose that means it has done a pretty good job, even if it is not a superb one.
3.5 out of 5 stars.
Posted by David Charles Bitterbaum at 3:02 PM