"Everything and a Mini-Series for the Kitchen Sink, Understanding Infinite Crisis" AKA I Read a Snazzy Short Book About Comics 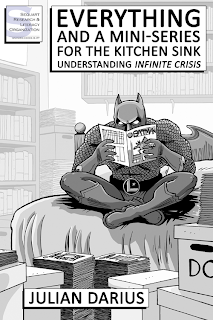 "Infinite Crisis". Those two words inspire fear in some readers of comics, joy in others, and a mixture of emotions in even more. It was arguably one of DC's biggest "event" comics ever, with numerous lead-in mini-series and tie-ins from ongoing titles, and then more tie-ins for when the event itself was happening, resulting in what was basically a gigantic epic of a tale that maybe was a bit too big for its britches, but which at least did something impressively gigantic.From its meta-fictional commentary with alternate-universe heroes talking about how horrible the DC Universe was, to its multiple plots all intertwining and breaking off at various points as needed, to the Universe-spanning threats, "Infinite Crisis" could be accused of many things, but never being small. Something so big deserves a breaking down of what worked and what didn't, and why. This is where the organization Sequart and the book I read comes in handy.

I enjoy reading books along with comics. I also enjoy combining the two into books about comics, and if anyone does such a topic well, it is definitely the Sequart Research & Literacy Organization, or "Sequart" for short. A non-profit dedicated to, "Advancing Comics as Art," the organization has put out books on topics such as numerous Grant Morrison titles, "Watchmen", and works by Warren Ellis. They also have a forthcoming book about DC comics and its cross-overs which will contain a chapter that is currently available as a "single"/smaller book focused on the aforementioned Infinite Crisis event, in all its glory and faults.

"Everything and a Mini-Series for the Kitchen Sink" examines many of the comics that led into "Infinite Crisis" along with the books that occurred during it, and the event-comic itself too. Writer Julian Darius is very thorough in pointing out the intriguing things DC did that paid off, and what attempts fell flat. It breaks down the complexities of a mini-series that definitely bit off more than it could chew, but points out how the parts that did work made for quite a delicious plot. From the once-heroic Superboy Prime becoming the sort of ultra-violent villain he started out protesting to all of the best and worst aspects of the most-popular heroes (Superman, Batman, Wonder Woman) being displayed, Julian Darius argues (and I agree with him) that there was a lot to like in "Infinite Crisis" and its related comics. Plus, it led to the stellar "52" series so that's another plus.

Sequart is a great organization and their books tend to be pretty stellar too. I greatly enjoyed reading, "Everything and a Mini-Series for the Kitchen Sink" and am excited to read some other books of theirs I've purchased. I'd recommend this title which you can see more of at this link, and checking out some of their other books.
4.5 out of 5 stars.
Posted by David Charles Bitterbaum at 12:06 AM