"Avengers: Endless Wartime" Review AKA Warren Ellis Needed A Paycheck So He Jammed Super-Heroes Into One of His Pretty Good Sci-Fi Stories 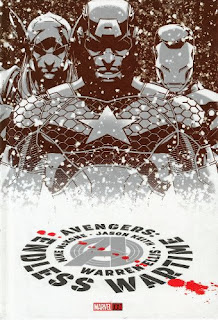 Some Background on the Book
This book, "Avengers: Endless Wartime" is notable in its release not just because it has a popular writer who doesn't always do work for Marvel (Warren Ellis). Nor is it because of how it features a forward by the extremely-popular (at least among fans of Marvel movies) Clark Gregg, of "Agent Coulson" fame. No, this is an especially notable release because it is an original graphic novel (OGN), set in "normal" Marvel continuity. DC has mucked about with OGN's some (see the highly popular "Joker" book, but that wasn't even canon), but generally it seems they and Marvel shy away from releasing stories set in their super-hero Universes (at least within the last couple of decades) that instead of being serialized just come out as one book.

There are some current exceptions to this usual state of affairs, such as Marvel's "Season One" releases, but even those are merely origin stories of popular characters not set in the "current" continuity of Marvel's Universe. Plus, those books didn't have any huge names on them to non-comics readers. Whether that was because they were geared more toward the bookstore-market where readers wouldn't know comic-teams well anyways, or some other reason I lack the knowledge to know. Ellis however is a bit more known, for reasons I'll discuss shortly. Plus, it is pretty clear this book is a much bigger deal than those "Season One" books the way Marvel has promoted it.
So, on one-hand we've got one of Marvel's first big-deal original graphic novel releases in recent memory so you know there was effort put into it (does, "God Loves, Man Kills" count as an OGN?), a popular-writer among both comic-nerds and regular folk, and very nice art by Mike McKone. On the other hand, this book is really, really depressing.

About Warren Ellis
Warren Ellis is one of my favorite writers. The man is very talented in a variety of ways. He loves writing prose books, exploring sci-fi concepts in his comic-book stories, and otherwise creating tales that carry a quite-dark edge. Ellis occasionally will write comics that relate to super-heroics but they tend to hold a very dour view on such a concept (just read "No Hero" with its lines about how people are idiots and need heroes to look up to, then tell me Ellis doesn't have some strong feelings). Occasionally when it seems Ellis needs a bigger paycheck to help find his smaller projects you'll see him do something for Marvel or the mainstream DC Universe (this does not count his Vertigo-label books as it is clear he enjoys those).

Ellis is getting to be a bit of a big name. With the success of the first "Red" movie based on a comic Ellis did artist Cully Hamner and Ellis' story "Extremis" being used (albeit in a tweaked form) in the movie "Iron Man 3" even non-comic reading households are starting to know of him. Plus, folk who maybe have never picked up a comic but have enjoyed his books "Crooked Little Vein" and "Gun Machine" could very well be interested in a book such as this--a comic which is a self-contained story with supposedly little outside knowledge needed. Marvel getting Ellis for their first big OGN in awhile displays how they are pursuing this plan in a pretty dedicated-to-succeeding manner.

Due to the manner in which Ellis writes, he sometimes doesn't match as well with mainstream super-heroes because his style of making everyone crack wise and come off as slightly-cranky can make perfect sense with some heroes (Tony Stark), but seem odd coming out of the mouth of Captain America, a man who is supposed to be a somewhat eternal optimist. Also, as this is an Ellis' comic you know there is going to be science-fiction concepts in here, and there sure is. In fact, sometimes it feels like Ellis came up with a sci-fi story and decided to tack heroes onto it. Thankfully, it is a pretty good sci-fi story and having heroes adds to the tale instead of detracting from it.

The Book Itself
"Avengers: Endless Wartime" is not a bad book, it is quite good. However, I would not say it is enjoyable. I would state such a thing because the overall comic has such a bleak and depressing tone a reader might want to self-harm after finishing the comic. It is strange because the forward by the aforementioned Clark Gregg talks about the wonderment and joy he gets from Marvel comics, and sets you up to feel amazed and peppy...then writer Warren Ellis drops a big bomb of "sad" on you. Now, Ellis writes plenty of "downer" stories, but for something meant to appeal to a more mainstream audience you would have thought Marvel would prefer injecting more levity into the proceedings, sort of how the "Avengers" movie was actually pretty light-hearted in a lot of ways.

Whether it is all the heroes coming off as cynical (and bitter), the plot with its commentary on the United State's somewhat-poor foreign policy (due to our desire to often bomb the Hell out of nations who don't agree with us), or the fact that in the end the current threat is defeated but it is clear little truly has been won, this is a pretty bleak book--and that's perfectly alright because this is Warren Ellis we are talking about. It is just odd when taking into account this is supposed to be the kind of book you give to people who enjoy Marvel movies with their generally-lighter tone but don't read comics. The plot basically is about these strange new drones that seem to be made out of a mythological monster, resulting in these children that are half-machine and half-monster being used by the US Government and S.H.I.E.L.D. to fight wars. This is where the Avengers come in.

A handful of the Avenger from the movies and other more recognizable Marvel properties that can't appear in an "Avengers" film (Wolverine) or who don't yet have a movie but were added to the cast because Ellis must like the character (Carol Danvers in her Captain Marvel role), go off and investigate these creature-machines. We get some fighting, some political commentary on how the US can be a bit of a secretive jerk, Captain America and Thor learn how this ancient threat ties them together, and Tony Stark says a lot of great quips that would be just as at home coming out of Robert Downey Junior's mouth (which I imagine is the point).

It's a solid story that I could see working spread out over a variety of issues in one of the myriad "Avengers" books, but which works even better as a complete work that you can set on your bookshelf and give to someone who says, "Hey, I like those Marvel movies but have nary a clue where to start when it comes to reading the comics (and yes, I imagine some people still say "nary")."
Marvel has a good team with Ellis and McKone together, because McKone is just equally at home illustrating talky-scenes full of dialogue or showing the Avengers fighting other-worldly beings and blowing stuff up. Plus, with Ellis' dour outlook it is good to have artwork that is grounded enough to have things look "realistic" but still loose enough that the ancient monster-machines don't look out of place either--something too "real" would be jarring and too cartoony would mesh poorly with the tone)

In Closing
"Avengers: Endless Wartime" is a success if the goal was for Marvel to make an original graphic novel that stands pretty-well on its own even in the bog of continuity that are super-hero comics--whilst also telling a canon stand-alone story. It is a failure if the plan was to create something with the same fun and breezy feel as many of the Marvel flicks, because tonally this is much closer to the darker "Iron Man 3" with its political commentary and cynical dialogue than it is to "Avengers" with its at-times-serious but often fun story-telling.

I would say the book mostly fulfills the idea of there being an "Avengers" comic you can give to your friends and family who are intimidated by all those stacks of comics about super-heroes but would enjoy reading about the characters they found so fun in the Marvel movies--and see some on the same "screen" that currently wouldn't be possible due to Marvel's confusing contracts with various studios for assorted characters. Sure, this may be a pretty depressing book--especially when compared to most of the Marvel flicks--but it's a good yarn and in the end that is the main thing people ask for in any medium, a quality story.
3.5 out of 5 stars.
Posted by David Charles Bitterbaum at 3:16 PM