The Letdown of Deadpool #63

This Wednesday a new Deadpool series starts. It looks promising, which is good as the last Deadpool series--which just wrapped up--ended pretty poorly. Daniel Way has written the series the entire time, and some of the tales that he told were great. That's why it is depressing this issues ends the series so poorly.

The series itself had some ups and downs, with certain issues being marvelously good such as #26 that looked deep into the character, and then less-good parts such as the whole sub-par, "Evil Deadpool" business. What is annoying is how this issue feels extremely rushed in its conclusion of, "Oh wait, that serum that made Deadpool human actually wears off and he's going to be the same," with the aforementioned Evil Deadpool showing up at the last minute to announce this. Before that we get the meh story of a former federal agent working her darnedest to take Deadpool down. It's nothing to write home about story-wise, but the biggest insult is the terrible art by Felipe Andrade and Sean Parsons. 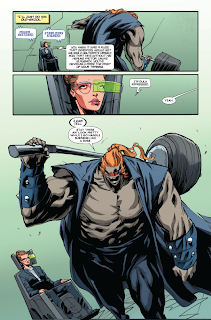 It seriously looks like Marvel took rough thumb-nail sketches, blew them up in size, and colored them in the hopes of getting this comic out quickly enough that this Deadpool series could wrap up before the new one started.

Seriously, the art is just ugly, perspective makes no sense, sizes are out of whack...it's just one of the ugliest books I've ever seen put out. Do note that I don't just mean ugly in terms of big-players such as Marvel and DC, I mean even compared to some of those independent comics with a great story but horrible art, this is even worse in quality (and there isn't even a very good story to support things). 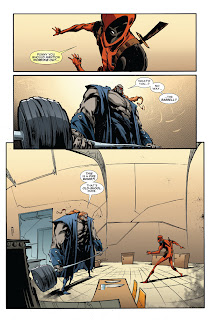 It's sad because this series had some truly great moments, and to go out with a whimper as this does is just anticlimactic  Then again, we are talking about comic books, where characters in ongoing-story Universes can't really have their stories end, they just keep going on so as to sell more books.

This Deadpool series has been good at times, and I will remember those good issues fondly. I'll just pretend this weak ending didn't occur.
1.5 out of 5 stars.
Posted by David Charles Bitterbaum at 11:50 AM