The, "Before Watchmen," Cash-Grab Has Gotten Even More Sad 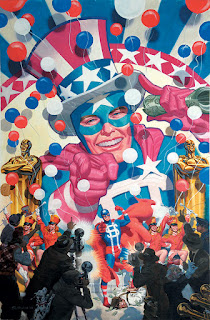 Hey, remember the hero, "Dollar Bill," from the Watchmen comic? Neither do I, he was basically mentioned in-passing and served zero purpose within the comic. That hasn't stopped DC from making it even more obvious they are engaging in an utter cash-grab with their, "Before Watchmen," comics by putting out a one-shot entitled, "Before Watchmen: Dollar Bill," which will focus on the titular character as he....does something, I guess?

It seems DC decided to stop yelling, "Fuck You Alan Moore !" choosing instead to just yell, "Fuck You, Comic's Reader Who Keeps Buying Our Terrible Before Watchmen Comics, Buy This Useless Stuff!" Seriously, when I first read about this via the comic "news" website Newsarama I thought it was a sarcastic joke until I remembered Newsrama is too busy kissing the rear-ends of comic-companies to ever dare question them. The way that article ends, asking what could come next in the, "Watchmen," Universe is meant to sound exciting, but just made me groan. It went:

The inclusion of the obscure character in DC's publishing plan for Before Watchmen suggests that virtually any character, big or small, that was mentioned in the original series could potentially be used for their own story. So who might be next? Mothman? Silhouette? Doug Roth in a Marvels style reporter-view tale? Completely original concepts set in the Watchmen-universe?

The thing that makes me the most sad is that the artist is the talented and well-lauded Steve Rude, a legend in the comic's industry. Is he seriously hurting that badly for work he had to take this project? Wait, he has been hurting that badly? Oh, well then I guess I can't hold this against Steve Rude too much. I still find this comic occurring to be a big example of things that are wrong with the comic's industry however, and this can be added to my list of, "Before Watchmen," comics I'm not buying (so, all of them).
Posted by David Charles Bitterbaum at 9:24 PM