Batman: Death By Design Versus Batman and Robin: Born to Kill

Two Bats From Different Worlds
Let's discuss two books and compare them a bit despite their having not that much in common besides having a Batman in them. I say a Batman because one story is very clearly not in continuity with a somewhat strange Batman and the other tale is very in continuity--the new 52 continuity where some things are different and some are the same, but continuity nonetheless. Let's talk about the book that's a bit more exotic first. 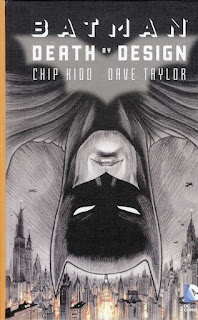 This book is more experimental than the other one I'm going to discuss, but in its effort to be different it can be a bit messy. First things first, the art by Dave Taylor is utterly gorgeous. Black and White with various bits of color for important aspects of the story or to provide more atmosphere, this art is just a beauty to look at. The story is a bit jumbled however. It's got the Joker, a new mysterious man known as Exacto, architectural discussion, and various twists that are supposed to be clever but instead come off as either predictably trite or just nonsensical.
As a result, we get a Batman book with breath-taking ideas such as a nightclub that is a large slab of glass hanging in the sky or unique Batman gadgets that absorb kinetic force, but we get a story that is a bit muddled with too many characters fighting for screen time--be it Batman, the Joker, Exacto, a romantic interest for Bruce Wayne, a bad-guy union boss, the snobby architect, the sad architect, his father, and so forth. 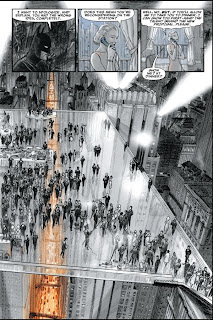 That's another odd thing about the book, it takes a really anti-union tone--which I'm not alone in noticing as this less-that-positive review points out too. The union boss (Bart Loar being his name) is a horrible person who tries to construct stuff of a low quality so it doesn't last long and he can get his men to do the replacement building in decade or two. Our villain also has people killed, threatens the children of decent men, and otherwise behaves in a mustache-twirling fashion, but I guess for the purposes of this story unions are evil and we should rely on a nice rich person like Bruce Wayne to fund our buildings without any nasty unions, because of course the super-rich are looking out for everyone's best interest! 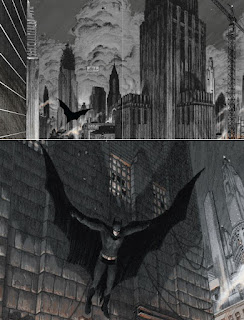 The story may be jumbled, and have the aforementioned oddly conservative tone when it comes to worker-rights, but the crazy ideas and the art make up for plot's general weakness.
3 out of 5 stars.

Batman and Robin: Born To Kill 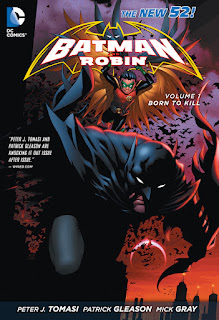 This, in comparison to, "Batman Death By Design," has art which is perfectly presentable by Patrick Gleason but nothing special. The story, meanwhile, is focused on Bruce Wayne and his difficult relationship with his son (and the newest Robin), Damian. 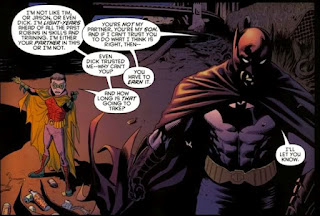 Basically, we have a story where someone from Bruce Wayne's past we have never before heard of (to my knowledge) comes back for revenge due to something our hero did long ago. In this case its a fellow named Morgan Ducart (with his villain persona being called simply, "Nobody"). I won't spoil too much about how Wayne knows Morgan and how Morgan knows Wayne is Batman, but basically it all boils down to Wayne making Morgan look bad in front of Morgan's daddy. You see what the plot is doing there? We have Wayne having trouble being a father against a man who is mad at Wayne for embarrassing him in front of his father.
Anyways, the thing that sells the story is Bruce and Damian's interactions. It's hard being a father to a boy who's been trained since birth to be a killer, and that's the one thing you don't ever do. In the back-matter writer Peter Tomasi himself says that the relationship between Bruce and his son is the main, "A story," with Morgan and the trouble he presents being the, "B story," that exists more to help develop the complicated life of Batman and son. 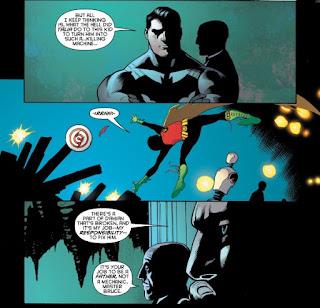 I enjoyed this a fair amount mainly because Tomasi really sells us on the interaction's between Bruce and his offspring. It is interesting and done well enough that I may check out the regular comic of this or at least definitely try out the next trade.
3.5 out of 5 stars.

Comparing Despite the Contrasts
Each of these books were enjoyable, although I do think the, "Batman and Robin: Born to Kill," book was slightly better overall. Still, in regards to art, "Batman: Death by Design," cannot be beat--even if its story is best described as, "meh." Meanwhile, "Batman and Robin: Born to Kill," was a good story with presentable artwork. I'd recommend checking both of these out as one is a feast for the eyes, and the other is an overall solid read.
Posted by David Charles Bitterbaum at 10:38 PM