It Begins
I read two DC comics that came out before the re-launch and may very well no longer be in continuity even though they were pretty snazzy, I somewhat enjoyed, "Deadpool Corps Volume 2," and I caught up with David Lapham's, "Caligula," which is quite disturbing but a bit fascinating in how grotesque it is. 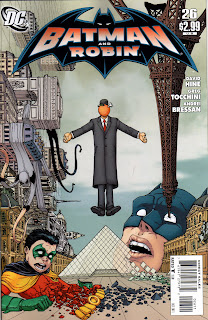 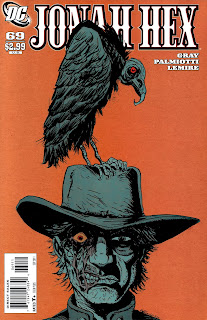 Batman and Robin #26 AND Jonah Hex #69
These two comics both told interesting stories, but it was their art that sold it. Batman and Robin presents a tale of the Louvre being taken over by super-criminals and all kind of mayhem breaking loose because of it. Jonah Hex #69 is a simple tale of Hex confronting his father after many years and watching him die--and is illustrated by the sublime Jeff Lemire. 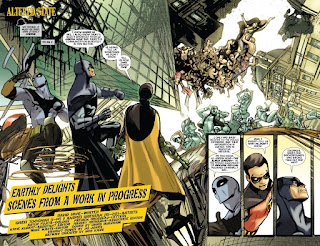 Both tales are somewhat psychological in a sense, talking about death and nothingness, but in one the main character's are fighting it and in another our "hero" is waiting for it to come to another character he despises, i.e. Hex's father. While one is highly surreal the other is extremely grounded in reality. Also, one is full of action and movement, the other is very still and full of talk--with only the aftermath of action (a gun battle) shown, the fight itself isn't even seen by the reader. Both tales are also "done-in-one" stories with Batman and Robin #26 being the last before the re-launch, and Jonah Hex #69 having a #70 after it before coming back as, "All-Star Western." These stories are in some way opposites, but in others alike. Plus, as I said, they both look very pretty. 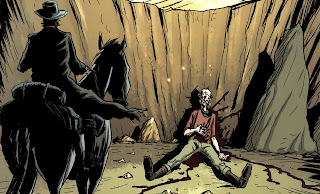 I enjoyed both tales pretty equally, but for the different reasons I outlined above, and don't regret buying them regardless of how much they do or don't "count" anymore in continuity now. They were good reads, and I highly enjoyed the art.
4 out of 5 stars (for both).

In With A Joke, Out With A Whimper 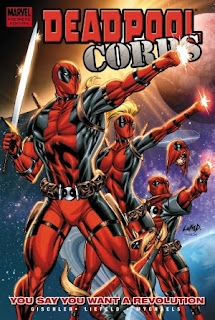 Deadpool Corps Volume 2: You Say You Want A Revolution
Poor Rob Liefeld. So many people hate him and say terrible things about him, but he continues to be one of the nicest guys in comics (as I discussed in a past post). I generally don't care for his work, but there are specific situations I like seeing him drawing things. One of these few cases is when Deadpool is involved. Therefore, we have the 2nd and final volume of the Deadpool Corps and Rob Liefeld illustrates the 7th-9th issue with someone who can do art a lot like him doing the rest--and I'm satisfied because this is how I like Liefeld. 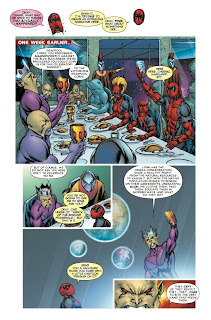 Victor Gischler writes the story, and he does a decent Deadpool having written the character in other mini-series, but the gags can drag for sure (They named the ship the Bea Arthur and by issue 12 that gag is worn so thin you want to scream). Also, the annoying thing with this volume is that almost the whole thing is told in Flashback--which is totally unnecessary as the story could have just been done straightforward but instead Gischler has us jump around a bit to make things extra confusing. This was a rare case where the story hurt Liefeld's art and not the other way around.

This was decent enough, being funny at times, clever at other moments, and looking good (for a Deadpool tale) but it just could have been quite better I would have thought. Things that I thought would turn out to be plot twists were just actually as stated, and the actual plot twists were weak. Plus, while we're on the subject of weak that ending that kills the series is so rushed and flimsy its just depressing. Still, I had some fun, so I won't hate too much.
2.5 out of 5 stars.

Now That's Just Nasty--Caligula #3-5
I haven't read a series this violent, sexual, and a mixture of the both....well, since I read another comic by the author of this series (that other comic was Crossed: Family Values). David Lapham has a sick mind. If you want a comic that doesn't push boundaries so much as cross them with wild abandon, then this is for you. This comic essentially takes an interesting supernatural spin on the famous mad-emperor Caligula who plunged Rome into more raunchiness and death than you could imagine.

Told from the point of view of a man whose family was murdered due to Caligula, this tale is just crazy but also fascinating in its portrait of a man who is a ruler but is also quite clearly utterly devoid of humanity--instead just being a depraved monster. Trust me when I tell you this comic is not for those with weak sensibilities, but if you have an interest in ancient history with a supernatural twist, or like horror stories, you might want to check this out. I just wonder how it will conclude (other than what history tells us)
3.5 out of 5 stars.

It Ends
There we go, some pre-re-boot DC comics that were pretty snazzy, some Deadpool material that passes muster in the sense of at least being decent, and a really twisted Caligula comic. How's that for an interesting assortment of comics?
Posted by David Charles Bitterbaum at 9:34 AM