Happy Birthday to my Son, Clarkson! 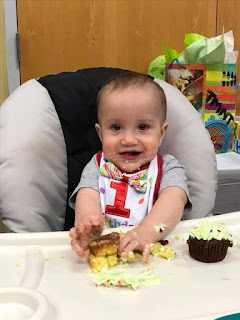 A year ago today my son, Clarkson, was born. He now is a whole year old and the most awesome little baby ever! He came 10 weeks early, which necessitated some time in the Neonatal Intensive Care Unit. He received excellent care there and upon coming home on May 11th of 2017 has continued to grow and thrive. Clarkson loves listening to music, eating snack-puffs, and people-watching--he is always interested in looking at everyone in a room anytime we go anyplace busy like a restaurant or grocery store. He greatly enjoys playing, "Peek-a-boo," and has almost mastered standing at his activity tables, only needing someone to catch him occasionally when he leans too far left, right, or backwards.

Anytime he talks in his baby-babble it is fun to try and figure out what may be an intentional word--"Mama, " and, "Dada," seem to happen often, and what is just an accident--one time when he was watching us sort clothes and put things on hangars we could swear he intentionally said, "Hanger," even though it came out as, "Han..gr." Clarkson is just an amazing guy and my wife and I love him so much. There was a lot of stress when he was born early, but any sadness or anxiety was worth the amazing child we have today. Clarkson was my baby of the year in 2017 and I know he will continue to amaze and impress as he grows into an awesome dude.
Posted by David Charles Bitterbaum at 6:14 PM