It Had Been a While Since a Game Legitimately Scared Me, Then I Played, "Resident Evil VII!" 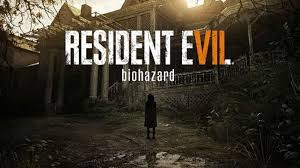 I don't get startled or scared too easily. I've watched a number of horror films from the old classics, to the gore-lacking PG-13 ones full of ghosts/haunted objects, and the gore-heavy torture-porn types.
The last movie that ever made me genuinely scared and unsettled was probably, "The Sixth Sense," which is funny as I don't even believe in ghosts and it isn't necessarily meant to be a, "True," horror-film. As for a video-game actually scaring me? God, it's been forever.

I mean, sometimes a game will make you jump when you think you've cleared a room of enemies and suddenly another one jumps out behind some cover to shoot at you, but that isn't actually scary, that's just unexpected. One of the few times a game maybe got me feeling, "Scared," would be, "Vampire: The Masquerade--Bloodlines." There is a quest where you go into a haunted hotel and the whole thing just drips with unease. There are eerily quiet moments followed by spooky sounds, and sometimes the hints of terror are more scary than any real threats--like when you find an old newspaper discussing how a decapitated head was found in a laundry machine and suddenly you hear something bumping around in a nearby clothes-dryer...only to discover it is just a basketball (if I remember correctly). That game came out in something like 2004 though, so clearly games don't scare me much. Then I went to my library to get a copy of, "Resident Evil VII," which I played for three hours last night and shit got real. 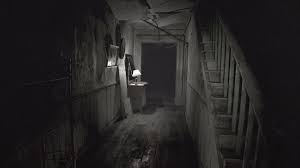 I am someone who usually doesn't mind spoilers so I've already read-up on much of the plot twists-and-turns in the latest, "Resident Evil, "game. Therefore, I know how/if this game relates to other ones in the series and what kind of threats players go-up against. I played some previous entries in the series (the earlier games, mostly) and never found them especially frightening as well. Hence, despite reading online about how this latest game will make you scream, cry, or otherwise poop your pants with fear, I wasn't especially worried. I booted the game up and began playing.

For those of you who don't want to have too much spoiled, I won't discuss any late game aspects I already saw online, and won't even say too much plot-wise about the three hours of, "Resident Evil VII," I've played so far. I will tell you that to the game's credit it cleverly takes its time to build dread before you even begin fighting against anything. For a good hour you're just exploring this creepy abandoned guest-house, studying the rotting debris and torn-up furniture. You play a man named Ethan who got an email from his wife who has been missing for three years, Mia, saying to come get her at a creepy farm down in Louisiana owned by a family known as the Bakers. Because horror-genres require people to slightly moronic Ethan goes to find Mia with nary any back-up. If I may spoil one thing, the first living-person you actually find is a locked-up Mia stuck in a cell. She's happy to see you, but clearly a bit messed-up from being trapped in a basement for quite some time. You work at escaping with her and then suddenly something goes wrong. 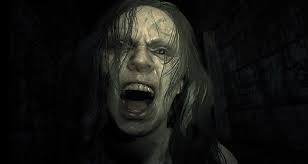 Mia seems to disappear and when you go looking for her in the house suddenly a terrifying monster-woman attacks you. I won't lie, when I opened a door in the game and looked-down the stars to see this creature crawling-up at me I loudly went, "Oh fuck no!" It turns out this is in fact Mia, who is fighting something evil within her, and alternates between looking normal and talking sweetly or trying to literally tear you apart with a chainsaw she finds. As soon as I got my hands on a weapon I fought against her tooth-and-nail, feeling accomplished when she went down before a large man suddenly stepped out of the shadows, said, "Welcome to the family," and punched me out.

I/Ethan awake at a dinner table with the aforementioned Bakers. They clearly are not, "Right," and as soon as  I'm able to try and escape I do so. At this point Mr. Baker then started chasing me through the house, jokingly mocking me in the process of trying to murder me. Around this time I realized just how slow controlling Ethan felt, and that the first-person perspective new to the Resident Evil series works wonders in makings things that much more scary. I eventually managed to hide from Mr. Baker, saved the game, and turned the PS4 off for the night as it was about time to watch, "The Mick." Upon my doing so I breathed a sigh of relief and realized the whole time I was playing the game I had either been tensed-up waiting for awful things to jump out at me, or feverishly running away/vainly trying to fight against the evil things I was worried about. 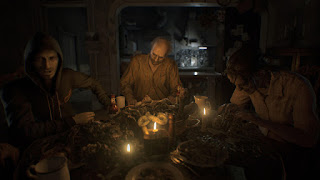 A game had actually made me feel scared, with the uncomfortable pit in your stomach, hairs on end, and otherwise off-kilter feeling. I was surprised by this--especially as I had already looked-up a number of things about the game and still found myself terrified! I haven't played a ton of, "Resident Evil VII," but what I have played was impressive. I look forward to being scared even more when I play the game further before I have to return it to the library!
Posted by David Charles Bitterbaum at 10:57 AM