I Read a Fitness Magazine's Article About How to Get, "Ripped," Like a Superhero And It Was Interesting

Once upon a time my wife signed-up to get free magazines that interested her and somehow a fitness one started coming called, "Muscle and Fitness." All the other magazines she actually wanted quit being mailed once they wanted money and we said no, but the fitness magazine never asked us for anything so it just keeps coming every month, sometimes twice in a month. As I generally only prefer to run if something is chasing me and will admit I struggle with not eating all the bad-but-delicious-things I usually just ignore the fitness magazines. However, this month one came that actually caught my eye. Observe: 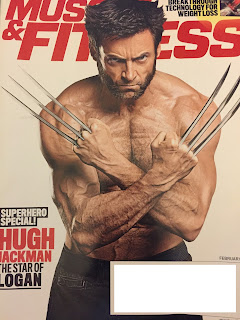 That is a cover-story about how to get fit like Hugh Jackman/Wolverine AKA probably one of the best super-hero actors ever besides Robert Downey Jr. as Iron Man. After flipping through countless pages advertising supplements, vitamins, and a Valentine's Day-themed article about foods that boost your sex-drive but are also healthy (so apparently chocolate is a no-go), I got to the main piece. It isn't actually an interview with anyone, but in fact is a fitness regimen that draws from celebrity trainer Ron Matthews, who apparently gets many actors in shape that play superheroes. There are various pages with different exercises to help you gain, "Strength like the Hulk," "Agility like Spider-Man," "Speed like Quicksilver," as well as, "Recover like Wolverine," from a stressful workout, and because the mind is important too, have, "Focus like Professor X."

I am happy to be living in a world where super-heroes have gained enough popular acceptance and love that a fitness magazine makes workout themed for them. Now, I fully doubt that by doing a, "Snatch-Grip Deadlift," I'll get as strong as the Hulk or that doing a, "Butterfly Situp," will allow me to run like Quicksilver, but I appreciate the encouragement. The weird thing about the article is that it gives some surprisingly nerdy details about the heroes, stuff that you don't just know from watching the movies, but things that would require a bit of internet-digging or familiarity with the comics to know. For example, the fact that Quicksilver can make mini-cyclones from his speed, that Wolverine was born in Alberta, or that Bruce Banner's actual first name is Robert. Either somebody spent some hours on Wikipedia or, "Muscle and Fitness," has a resident comic-nerd. 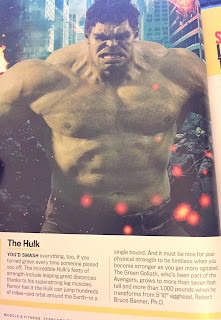 In closing, I'm not making fun of the fact, "Muscle and Fitness," did a piece on superheroes, although it is kind of funny to think half the heroes they talk about got their powers through chemical and/or biological enhancement or some just have a genetic factor (e.g. they are mutants). Yes, I'm not making fun of it because I am pleased that comic-book culture has seeped into stuff like a fitness magazine, and that it has some strangely specific and accurate facts about the heroes. Plus, I guess there is cross-over potential with pieces like the one this magazine did. After all, it got me to actually open an issue and look at it for a bit.
Posted by David Charles Bitterbaum at 12:35 PM