A Quick Rant About The Gabby Douglas Olympic, "Scandal," AKA How Can Anyone Dare Call Her Unpatriotic? UPDATED With More Idiocy Thanks to Ryan Lochte

I'm Pissed at All the Haters
As my header says, I'm pissed, and I'll tell you why. Arguably one of the most patriotic  things someone can do for their nation outside of military service is representing their country in the Olympics. The tens of thousands of hours spent practicing and perfecting your sport so that you can be among the best-of-the-best is a level of commitment that boggles my mind as someone who considers giving-up and ordering pizza when I can't get a can-opener to work. To win a gold medal at the Olympics even once is amazing, to win it multiple times is an astounding accomplishment. Gabrielle, "Gabby," Douglas won Gold multiple times in 2012 and has won it in 2016. She did it for our nation, making us proud, and people dare criticize her and call her names like, "Crabby Gabby," because of what? This: 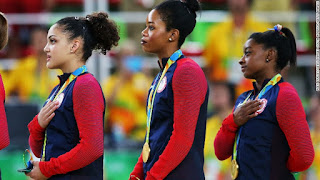 That is Gabby Douglas and her teammates while the United States National Anthem played after they won gold. She didn't cover her heart, and the internet lost its utter mind. She even apologized and said no disrespect was intended, but of course all the misogynists and racists have come out of the woodwork to harass her despite the fact that she proved she's more patriotic than all of them combined the moment she even walked into an Olympic arena to compete. Meanwhile, Michael Phelps laughs during the National Anthem and once he explains it everyone forgives him--no disrespect to Phelps intended, I am proud of the dolphin-man, I just want to prove a point.

How dare anyone question the patriotism of an individual who works hard enough to earn a spot in the Olympics representing their country, never-mind even uttering a harsh word when they go on on to win a gold medal! Seriously, what did she ever do to deserve being bullied? It makes me sick and I'm glad that for all the unwarranted flack she has received even more love and support has been directed her way too. I'm proud of all Olympians who represent their countries, whether they win a medal or not--by simply being in the Olympics you have already proven so much. In closing, shut-up Gabby Douglas haters, no one wants to hear from you. Unless you have a tip on how to open this can of beans, because I'm seriously starving.

Update 8/21/16
Now I can be even more pissed. Why, you may ask? Well, a man in his 30's who lied about being robbed, vandalized a gas station, and urinated on said gas station's walls has had people defending him with B.S. statements like, "Boys will be boys." Yes, Olympic swimmer and failed reality T.V. star Ryan Lochte committed crimes, lied about them, and now is surprised it is all coming back to bite him on the ass. A living, breathing portrayal of the definition of, "Frat-boy douche," Lochte is an example of who we do not want representing our country in the Olympics. Meanwhile Gabby Douglas still gets harassed whilst some people criticize Lochte, but far too many people (i.e. even one person) defend him.
Posted by David Charles Bitterbaum at 11:49 AM