I'm Not Really Laughing Much. At All. 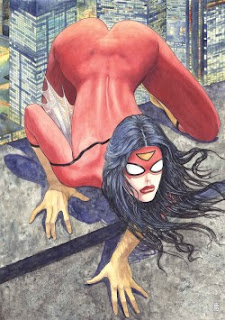 Okay, see if you follow me here. Frank Cho is a comic artist who is quite well-known for drawing busty women and women with well-defined posteriors. Now, back some time ago (a whole year!) Milo Manara had a variant-cover for Spider-Woman that some objected to as being a bit too much. I myself would agree it is a hyper-sexual image of Spider-Woman, but then again when you hire Milo Manara you should know what you're getting into. The image is the one above and it is clearly quite saucy.

This drawing of a quite-limber Spider-Woman led to Frank Cho posting-up his own drawing of the growing-in-popularity Spider-Gwen where she posed similarly and a nearby Spider-Man remarked how it was, "Deja Vu!" Now, this led to some people being a bit upset stating that Spider-Gwen was meant to be under 18 so it was in bad taste, and others pointing out she was clearly over 18 in her comic, with that followed by others stating it still just seemed tacky. This is the discussed image: 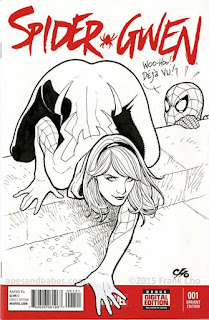 We got to the point where the originator of Spider-Gwen's now beloved outfit, Robbi Rodriguez expressed he was upset with Cho for taking a character he thought of as one of, "His kids," and drawing a, "Dirty picture," of her.

This led to Cho creating yet another drawing with Harley Quinn making the pose whilst the Joker hints the idea is to make the internet mad (Comics Alliance breaks a lot of this aspect of the story down well). In case you haven't had your fill of butts pointing up in the air here you go: 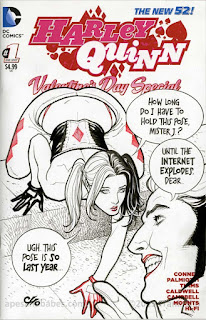 It has now gotten to the point where Frank Cho has made a routine of drawing various popular female characters in sexy poses and having other characters comment on it--with Spider-Gwen often being in the image stating how she is outraged. It is a weird case of having his cake (or perhaps, "cheesecake,") and eating it too. I mean seriously, Frank Cho, if you want to draw cheesecakey images that some people love and other people dislike, go for it. Should you want to make a comment about sexualization of female characters in comics feel free too. Should you want to do both that's even fine, seriously! Go ahead and make a sexy comment that in the process of being raunchy discusses the male gaze or such, it would be cool.

If, however, you want to draw cheesecake and then pretend you're making a statement about political correctness or over-sensitivity while supposedly then going on to defend it as a joke, you're just being obnoxious. Which brings all this to the point where it seems like it could be coming to a head as Frank Cho went and posted this doozy up recently: 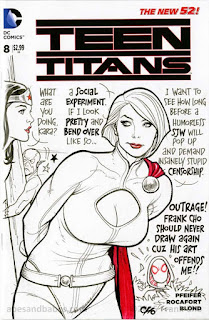 This resulted in Robbi Rodriguez half-jokingly observing on Twitter that he feels , "Frank Cho should send me a gift basket since I made nim [sic] more relevant in the industry then any of his last few projects." That's a pretty harsh burn, but also one Cho kind of deserves, as it feels like Cho is making an effort to make a joke about a joke and just sort of falling flat on his face while doing it. So, I just wanted to ask you to stop, Frank Cho, please, because it just isn't funny anymore.

Honestly, it was never that funny in the first place, but now any humor from this has been run into the ground by you. We are at the point where instead of, "Shocking," us with your supposedly edgy humor you're coming off like a middle-schooler who thinks drawing word, "Boobz," makes him the badass of 4th grade. In reality, however, we're all just shaking our heads and going, "Oh that Frank Cho, when will he grow-up?"
Then again if these sketch-covers of his are selling for upwards of $800 in cash-money (one price I saw mentioned) as they get more and more press  perhaps he doesn't care what most of us think as long as somebody wants to pay him almost a grand for a lame gag. So yah for the invisible hand of the market theory of economics, I guess?

UPDATE: It seems things are only getting uglier, with Frank Cho stating he does has a gift basket for Robbi Rodriguez that consists of insult-items. Time will tell where this leads...
Posted by David Charles Bitterbaum at 11:28 PM