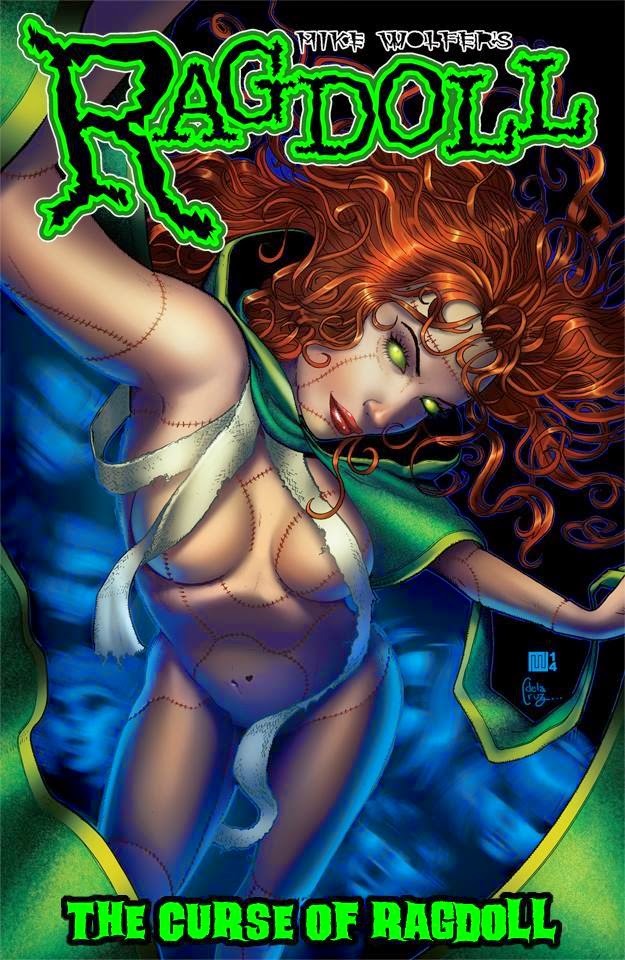 I'm a fan of Mike Wolfer's various works, so when I heard he had a Kickstarter going for a creation of his known as "Ragdoll" titled, "The Curse of Ragdoll," I was very interested. I interviewed him about the Kickstarter, past comic-works by him I've enjoyed, and what future projects he had coming up. Well, the comic is done and it along with any other extras folk pledged for are in the process of being shipped with digital copies already in supporter's hands via their Laptops, Kindles, iPads, or whatever folk are using today to read their digital comics (I myself enjoy the iPad).

Having now read "Ragdoll" I can say that while some plot elements bugged me, it is overall a highly enjoyable read. Mike Wolfer writes and illustrates it, with some gray-tones done by Dan Parsons and lettering by Natalie Jane. It centers on the titular Ragdoll, with her adventures being told through various chapters of her journal discovered in an ice cave by the adventurer Peter Wyndham. Wyndham and his reading of the journals serves as a sort of framing device for the book, with him appearing primarily at the start and finish. The real star of the show is of course Ragdoll herself. Sewn from the parts of various women who died in murderous ways, Ragdoll goes about getting revenge for them as a paranormal righter-of-wrongs. Various chapters of her journal lay-out her violent missions, and generally whenever we see an evil man the odds are good Ragdoll will soon be ending his life.

This all sounds straightforward, but there is clearly a bit more at play than a simple magical avenger going about. We never actually see just how Ragdoll came into existence, but some eerie men pop-up at various points in the story at just the right moment to help the assorted murderers dispose of the bodies of the women Ragdoll is made from--so clearly something is up. These strange men sometimes are undertakers, other times carriage-drivers--whatever the occasion calls for, and I imagine in a future installment of "Ragdoll" more will be revealed. For now they exist on a bit of the periphery of the stories, flitting about, hinting at something evil but not quite making it clear what their end-goal is.

With "Ragdoll" being a horror-revenge story hinting at a mystery the plot is quite enjoyable. What about the art though? Well, I was familiar with Wolfer for his art before his writing, and I've always thought it to be stellar stuff. An interesting thing about the artwork is how Wolfer says in the introduction to the book that much of "Ragdoll" was actually originally contained within an Avatar Press anthology known as "Raw Media" before having some parts re-drawn for this collection. "Raw Media" contained stories that at times got X-rated, and Wolfer wanted "Ragdoll" to come back, but operate more as a general horror story as opposed to a pornographic one. Therefore, "Ragdoll" collects installments from those issues of "Raw Media", but with the new artwork and lettering--and the X-rated stuff replaced.

While it might not be as raunchy as it once was this is still definitely a "Hard-R" type of comic, with Wolfer expertly contributing some cheesecake to go with the scares and violence. It usually doesn't feel excessively sexual however, considering the main M.O. of the Ragdoll is she often seduces the men she then ends up destroying--as it was their lust and violence towards past women that leads to their downfall. Therefore, you get some erotic-styled art, plenty of creepy and scary images, and toward the middle of the book other supernatural elements such as werewolves and vampires start showing up. It is actually these elements that made for the parts of the book I most enjoyed, and elements I was perturbed by.

One thing that bugged me about "Ragdoll" was a chapter that seemed almost completely removed from the rest of the rest of the book and went against the usual routine to somewhat confusing results. Basically, there is a part of the book where Ragdoll thinks back to the past of one of her body-parts and it actually involves two evil women who are vampires--posing as nuns, no less. In this chapter the nuns are in fact the ones who murders the woman that finds one of her body-parts put into Ragdoll, and one non-nun escapes stating she plans to attack the town. Then....the chapter just ends and is never mentioned again. Clearly, this threw me off and felt a bit odd, having this section of the book that seems disconnected from the rest of the story. However, one of the mysterious part-gathering men does appear, and Wolfer has announced that the next volume of "Ragdoll" will be titled, "Orgy of the Vampires," so I am pretty sure my concerns with this bit feeling removed from the main book is more a case of foreshadowing future chapters as opposed to Wolfer forgetting to follow-up on this segment.

Besides that strange chapter, the only other element of the story that bugged me would spoil some of the plot, so I'll merely say that one of the few seemingly happy romances in the tale has a disturbing twist that otherwise ruins things--but then again there usually aren't happy endings in horror stories so perhaps the shocking surprise was to be expected.

One thing that isn't a complaint so much as a hope for the future would be that we didn't see as much of the interesting Inspector Pike as I would have liked. If "Ragdoll" is more of an antagonist, and Wyndham is used as a framing device for some of the stories, then it could possibly be argued that Inspector Jason H. Pike is the closest thing to a "good guy" in the story. Despite being on a vacation his skills are needed by his fellow British policeman, taking him back to work attempting to solve a string of strange murders that have been occurring--which we as the reader know of course relate to Ragdoll. Reminiscent of Sherlock Holmes, Pike is a man with a keen deductive mind, and an extremely morbid wit--I often enjoyed his purposely-terrible puns about the mutilated bodies they would find of Ragdoll's victims. Pike is another character the book makes clear will be in future installments of "Ragdoll", so while I wish he had been within the book more I look forward to seeing him again.

"The Curse of Ragdoll" is a delightful first volume in the adventures of our spooky heroine, and I would eagerly recommend checking it out. Between the entertaining story and superb art "Ragdoll" is full of good times all around. I mentioned how some plot elements bothered me, but on the whole it was great. There is in fact another Kickstarter going currently for other "Ragdoll"-related goodies, including the book, but should you want to just get your own snazzy copy of the book it can be found on Amazon here currently, with plans in place for it to be in "Previews" in the future too. Also, for more "Ragdoll" news, such as updates about the upcoming 2nd volume, you can check it out on Facebook.

In closing, if you're someone who enjoys the work of Mike Wolfer, horror comics, or just a person who enjoys great art I would say to go ahead and give "The Curse of Ragdoll" a read.
4.5 out of 5 stars.

Note:
A digital copy of "Ragdoll" was provided for review purposes before my physical copy arrived as I supported the Kickstarter also. As I've reviewed other books I've funded on Kickstarter, and reviewed works by people I've interviewed this is not out of the norm for my journalistic standards. I'm always my good ol' brutally honest self, but just of course want to let you, my readers, know about these things.
Posted by David Charles Bitterbaum at 10:32 PM