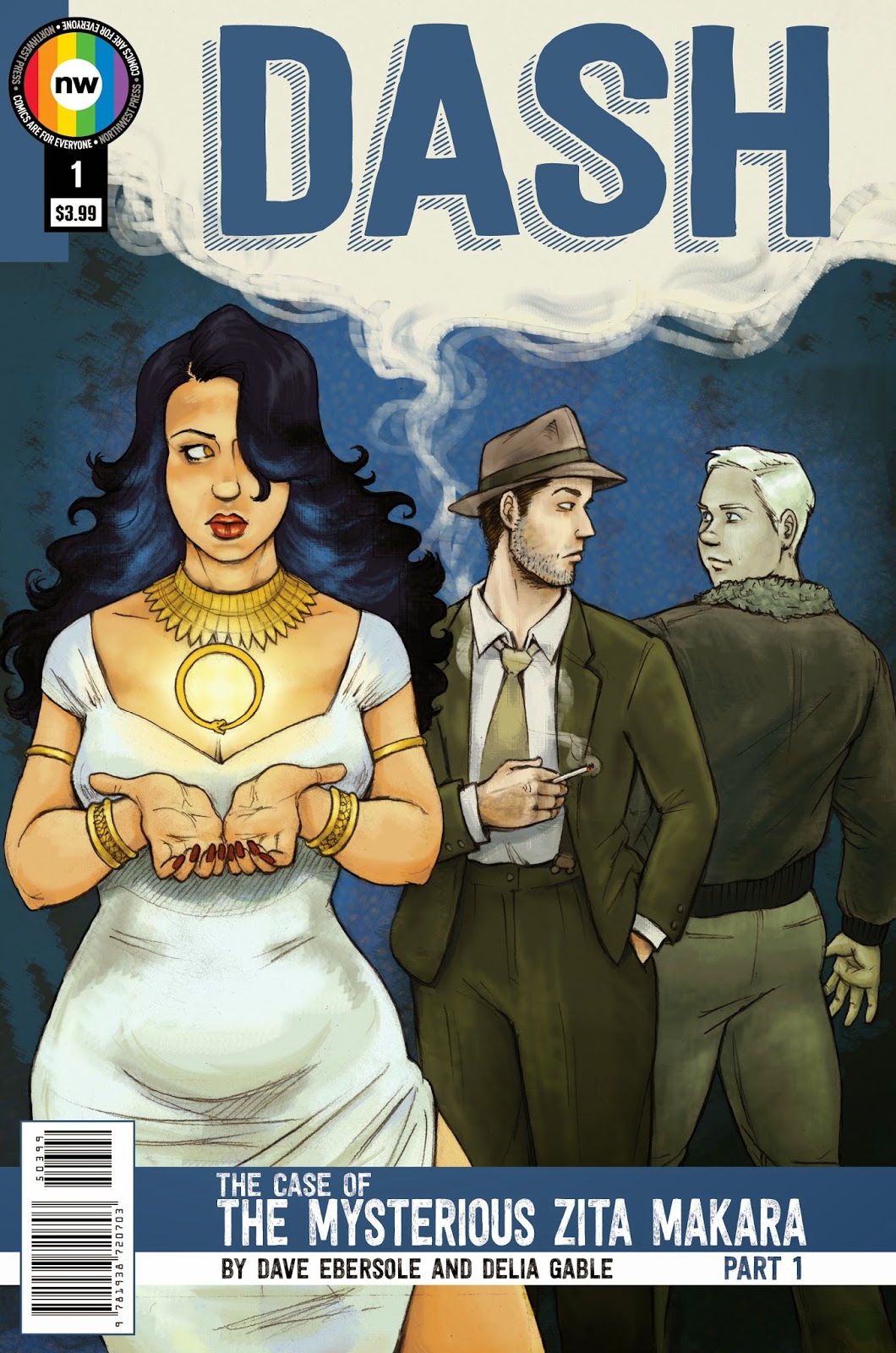 I'm hoping to post one of my "rant-review" segments where I do a bunch of capsule reviews of comics, but I am a bit behind on some of the more "mainstream" series I'm reading I instead have lately been checking out more and more independent and smaller-press stuff. Perhaps I'll get some rant-reviews up of those even, but for now I thought I would point out one smaller-press comic I read and especially quite enjoyed. It is titled "Dash" and contains story elements I often quite like, namely noir-type stuff, but with a twist.

Dash Malone is a private investigator in 1940's Los Angeles. He hasn't gotten a case in awhile until the start of the comic when a woman named Zita Makara has come to his office hoping for help exchanging, "A large sum of money," for an item she insists Dash will find of little importance. Zita attempts to use her sex appeal to get Dash to take the case, but that is where one of the first interesting elements of the story come into play that make it more than your usual "old-timey detective tale." Namely, Dash Malone is gay, and only sort-of in the closet with it clear some know about his background (especially on the police force, interestingly) but many more people who don't. He of course realizes Zita's request sounds fishy, but as he really needs some income he decides to sleep on it.

From this point the comic spends much of its time introducing the other various characters that will play a role in the story, such as Dash's assistant Cindy, his one friend on the police force, Sal, and his secret-lover Johnny Plinketts--or "Plink", for short. We actually meet both Sal and Plink at the same time, as Dash and Plink find their romantic meet-up in the park interrupted by Sal--who chides them that if it were any other cop they could be going to prison for, "Public Sodomy." Sal also mentions a strange series of murders going on near the park, a plot element I didn't realize would become as important as it does.

After we start getting feel for the characters the plot advances some more, with Dash trying to get in contact with Zita (whom he learns works at the museum giving tours of the Egyptian exhibit), but finding it increasingly difficult to locate her. Then the issue comes to its cliffhanger that involves a character Dash knows becoming another victim of the mysterious murderer, with it actually surprising me a bit which character is affected. This twist, which I won't fully spoil so as to encourage you to pick-up the comic, makes it clear future issues will have Dash trying to figure out who is behind the murders and how it relates to the people he knows and has recently met.

I greatly enjoyed "Dash". As I mentioned I love noir-type stories and a good detective yarn always gets my attention. When I first heard about "Dash" being a mystery story and then learned that it also incorporated the intriguing element of the main character being a gay man in a time being gay was especially dangerous, I knew it was a comic I wanted to read! Writer Dave Ebersole gives us a suspenseful story and artist Delia Gable provides artwork that is appropriately moody, with muted colors and a slight feeling of unease that compliments the events of the story perfectly.

The aforementioned Northwest Press is behind this comic, and is a publisher that focuses on putting out, "The best lesbian, gay, bisexual, and transgender comics collections and graphic novels," and, "Celebrating the LGBT comic's community." This first issue of "Dash" definitely is a great comic and one a person can enjoy regardless of their sexuality--although it is of course encouraging to see more diversity in comics. As Northwest Press is a smaller publisher your local comic shop may not carry "Dash", so if you want a physical or digital copy you can check it out on their website here. I would recommend you do!
4 out of 5 stars.

Note: A digital review copy of "Dash" was provided at my request.
Posted by David Charles Bitterbaum at 7:00 PM