A Glowing Review of the 3rd Issue of "The Standard" 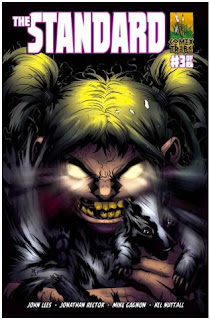 In a previous post I discussed some of the comics coming out from new publisher Comixtribe. My favorite as of only its first issue was "The Standard" and with it now on its 3rd issue, I continue to greatly enjoy the comic. I find it a pleasurable read not just because the characters are interesting, the art is good, and the main plot is intriguing, but also because of how the comic subtly explores and comments on the classic tropes of super-hero comics and how they have evolved over time. As I discussed in my previous post, the first issue dealt with a protege of the famous hero "The Standard" who later assumed the title. Named Alex Thomas he took over the mantle some time ago but was often more busy being a reality T.V. star (that reminds me of my other post today about super-heroes and the media) than fighting crime, even if his heart was in the right place. If I may spoil how the first issue ends, Alex Thomas ends up murdered mysteriously and as of the 2nd issue the original Standard, elderly Gilbert Graham, has taken his heroic mantle back-up.

The things about the series that are most interesting are seeing how Gilbert's past exploits compare to today's conflicts. In scenes set in the past right around when the cute innocence of heroic comics started to end it is seen how Gilbert went up against silly villains such as, "The Skunk" who would say cute puns--whereas today Gilbert is fighting super-powered people abducting children and committing all sorts of heinous crimes. 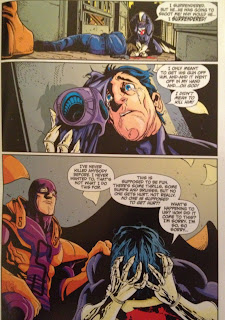 The most telling scene of meta-commentary is where one of Gilbert's foes, the aforementioned Skunk, is almost murdered by an overzealous police officer and in the process of defending himself accidentally kills the lawman. He bemoans, "I've never killed anybody before. I never wanted to, that's not what I do this for. This is supposed to be fun. There's some thrills, some bumps and bruises, but no one gets hurt. Not really. No one is supposed to get hurt! What's happening to us? How did it come to this?" It is as if the comic is showing us what might have been going through the minds of our fictional characters had they been real heroes seeing as their world slowly went from foiling simple bank robberies to horrible crimes. These elements of "The Standard" are what take it from a pretty good comic about heroes to a great comic about heroes and how we as a society view and treat them in our fiction.

As the latest issue of "The Standard " comes to an end some sub-plots have been resolved but the overall mystery of just who or what killed Alex Thomas remains. If "The Standard" keeps providing not only great storytelling, but clever commentary on super-hero comics, I'll be extremely excited to follow this story to its conclusion.
4.5 out of 5 stars.
Posted by David Charles Bitterbaum at 6:36 PM