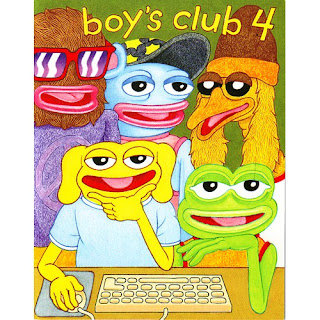 Matt Furie is a great artist. He has a style that is cartoonish and fun. His series, "Boy's Club," was great in its first two issues, and I was recently able to track down the third and fourth. It's basically just a series about friends that aren't quite human but don't seem to exactly be animals who smoke cannabis and do various crazy shenanigans. The thing is, it is so fun in its, "chill" nature you can't help but enjoy it and just sort of cruise along with the mellow. This series is a good time and you ought to pick up this or any other work by Matt Furie, really.

I Guess T.V. Really Is Bad For You--Videodrome 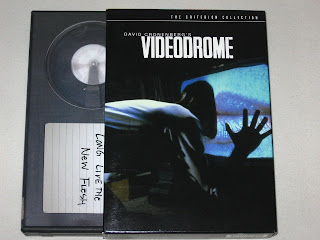 I recently saw this movie from the 1980s starring none other than James Woods and directed by the always-provides-crazy-imagery David Cronenberg. It is about a sleazy cable T.V. producer who stumbles upon something being broadcast called, "Videodrome," that is pure violence, torture, and murder--and he wants to get in touch with the producers to get this show produced. I'm going to spoil things, but clearly Videodrome is not just a fictional show and people really are being hurt, and the messages the movie imparts about the way television exists in a way where our virtual selves are more real than our flesh selves are even more true today about the internet. It's creepy how much some of the things this movie has to say resonate today.
Speaking of creepy, this movie is also just plain bizarre and twisted. It's at time gruesome, visceral, and a bit unpleasant, but intentionally so. It does drag a bit at points, but overall its a solid film. I've discussed the movie, "Network," before and this is almost sort of a parallel to it, discussing the impact of television on our lives, albeit this movie does it much more darkly and in a way that makes you feel freaked out.
3.5 out of 5 stars.

Well, That Was More Annoying Than Taking Viagria And Trying To Sleep On Your Stomach--Avengers Origins: Luke Cage 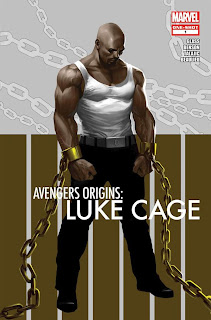 You know what I would like? A modern re-telling of the Luke Cage origin story that doesn't have him talking stereotypically, or threatening to kill someone. When did Luke Cage ever plan to kill the guard that caused him to gain his powers? Luke Cage is not bloodthirsty, that's just...ugh. Plus, did I mention how it has him speaking? "This brutha don't need no savin'," sounds like something out of a bad minstrel show. Seriously, Marvel, you build up all this goodwill about Luke Cage--seeing as how he is protrayed pretty well in your comics--and then this comes out and just acts like that drunken loud couple at the party who argue too loudly. At least the art was nice to look at, so I'll give it...
1 out of 5 stars.


As We Proceed, To Give You What You Need....
I think the moral of this post is people should read more indie comics, Videodrome was a weird movie, and when white guys write black guys you really should make sure they aren't doing it in a way that is annoyingly cliche and stereotypical. I'm just saying, is all.
Posted by David Charles Bitterbaum at 9:42 PM