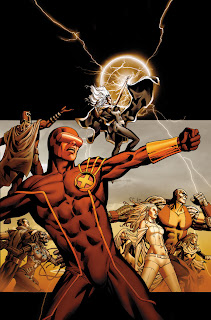 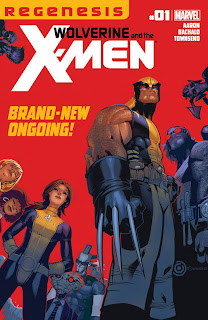 I've read the two big X-men comics that are the main ones of the all-new direction for the line (ignoring the fact that X-Factor will always be doing its own awesome thing). They are quite different in art-style, tone--hell, even coloring (Uncanny X-Men has a bit of a darker hue). Are they both good though, is just one, or is it perhaps the nightmare scenario that neither is particularly impressive? Read on and see what I, a random yokel on the web thinks.

Uncanny X-Men #1
Wolverine And The X-Men came out a week earlier, but I'm going to review this one first, because dammit, it's my blog and I'll do what I want! Why? Because at least here I have control as opposed to at that stupid coffee store where they seem unable to understand I'm lactose-intolerant and when I say I want a soy latte it really has to be soy or there will be stomach trouble...but I digress. This was a cool comic, not as good as the one I'm about to discuss next, but intriguing.

You see, Scott Summers, i.e. Cyclops has become pretty unlike-able, and borderline super-villain. The comic points this out though. Mr. Summers realizes that if these mutants want to be left alone they have to save humankind until people realize they just need the mutants around to keep their little behinds safe. In the meantime, the mutant island of Utopia has to show off that it has weapons of mass destruction in the form of its walking, talking, residents. Essentially, this is a comic of political allegory with Cyclops being a separatist who realizes, "Hell, people hate us, so they might as well fear us so they don't at least wipe us out." 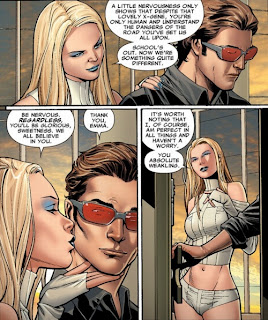 Writer Kieron Gillen has hit upon some neat concepts here and I look forward to seeing where things go. A comic like this is an interesting one for sure and with this political and social angle I'm on board. Oh, and there were some fun moments of levity too, so things were fun now and then.
4.5 out of 5 stars.

Wolverine And The X-Men #1
Wolverine is opening his own school to teach mutants. He wants to be accepted by humankind so much New York State has some school board people coming to evaluate the school. He is sooooo no longer cool. Oh, and the art in this is FREAKING AMAZING! Bachalo just kills it with his crazy designs and perspectives, yeah this is just one gorgeous comic that is a feast for the eyes. Also, Jason Aaron isn't too bad either with the writing, giving everything a nice fun tone to match the art. It's just really quite fun. 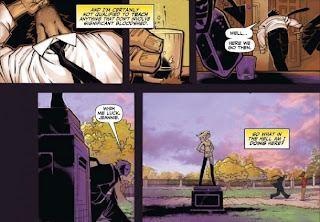 We're in a new era of X-Men here, symbolized by how Professor X wishes Wolverine well, and I'm quite excited for sure. This was just a masterful comic that was a pure delight to read.
5 out of 5 stars.

In Closing
A 4.5 out of 5 and a 5 out of 5, wow! I quit reading much of the X-Men comics awhile ago, but clearly I'm going to be coming back for some of them now that things are looking so promising in terms of quality story possibilities. Here's hoping for a new grand era of X-Men comics!
Posted by David Charles Bitterbaum at 3:36 PM