Violent Old Men, Aliens That Vomit Blood Or Are Strippers, And Modest Mouse--Mix and Serve 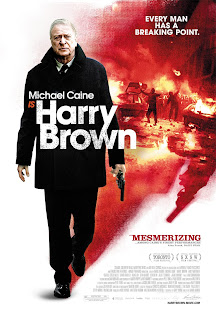 I saw the film Harry Brown a bit ago, around the same time I read Red Lanterns #1, which came out 2 or so weeks ago. I liked it. It was sort of like Death Wish but not really. I say sort of because it is about a man who doesn't have anything to live for that is pushed too far, but otherwise its much different. It's about how a seemingly sweet and gentle old man with a violent past could let the monster that slumbers inside him come back out when he just gets sick and tired of his city being a mess. Yeah, this almost sounds like a super-hero comic or something. Our protagonist--played amazingly by Michael Caine--doesn't put on a jumpsuit or anything to fight crime however. He gets a gun and starts doing what a vigilante more like the Punisher does--killing people.

It's a good movie, a disturbing movie, about how someone nobody suspects could in fact be the most dangerous person in the room, and anyone has it within them to crack, Harry Brown just had the past training to follow-through better with his killing all the people who did terrible things--such as what starts his violent adventure (which I won't spoil). This raises the question, why was I more impressed by the tale of an old man who was angry than I was by a comic about aliens, one of whom had his whole species wiped out? 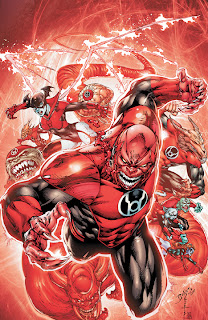 I mean really, this guy named Atrocitus had his whole planet destroyed, yet this comic written by Peter Milligan is more about him feeling like he is losing his rage and whining than it is about anger. Oh, and Ed Benes illustrates it so the female character looks like this: 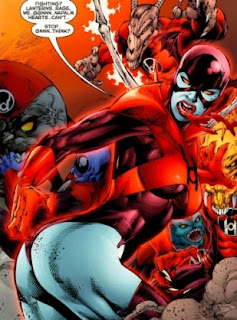 That must be hard to contort in a way where we get a shot of both your breasts and ass. I've said it before and I'll say it again, Ed Benes is a hack. This Red Lantern comic was just disappointing. I wasn't expecting much...still I was let down. I figured we would get a comic about anger and rage and it would be all over-the-top, instead we got--as I said--a whiny Atrocitus and a female red lantern drawn posed in ways that must be painful to stand in. What happened to when the Red Lanterns were kind of cool in a hardcore way? You know, think of this scene... 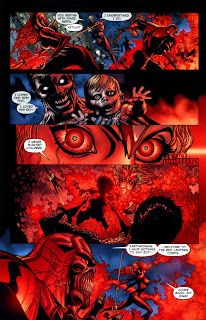 It's a bit silly, it's violent, and its what I wouldn't mind in a Red Lantern's comic. This is just poor though. Yeah, I felt the anger of Harry Brown much more than I felt that of anyone in this comic--and when your whole "thing" is being angry that's kind of pitiful.
Harry Brown: 4 out of 5 stars.
Red Lanterns #1: 1.5 out of 5 stars. 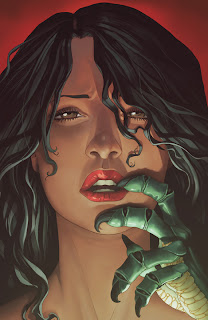 DC, despite having everyone mad at them for releasing a comic where Catwoman and Batman essentially have graphic-sex in the comic, and another where Starfire acts like a bimbo (look at my earlier post for more on these delightful subjects) released today another comic that was already causing some rumbles of discontent, Voodoo #1. Someone at Bleeding Cool reviewed it last night. I was wondering if it really was the kind of comic that would make me feel a little self-conscious reading it in the store though. Would I look around as if I were in a porn shop scared someone would know me and see what I was looking at, or was this just a fun little comic about an alien-woman with a bit of tasteful implied stripping? I picked it up and my response was as such:

I've been listening to Modest Mouse's last full-length album that was released, "We Were Dead Before The Ship Even Sank," from 2007. It's a good piece of musical work. From the solid opening tracks that set a somber yet energetic mood, to the quiet later tracks, Modest Mouse knows how to give us some quality tunes to listen to while sitting and work, driving along, or thinking about life. It's been a bit so I wonder when we'll get another complete album and not just an EP, as they did release one of those a couple of years ago.
4 out of 5 stars.


In Closing
Watch Harry Brown, skip Red Lanterns, avoid copies of Voodoo like the plague, and listen to Modest Mouse more if you don't already.
Posted by David Charles Bitterbaum at 9:26 PM