"It's About Power and Money" AKA Nu DCU, Soldier X, and Tupac

Opening
This post we have my thoughts about how the "old" DC Universe ended in Flashpoint #5 along with how it began in Justice League #1. Then I say my own thoughts about the highly-popular Cable and Soldier X comics that occurred back in the early 2000s, having been inspired by series of cross-over posts between some writers I really enjoy reading.

Also, tomorrow is the 15th anniversary of the death of one of my favorite music artists, Tupac Shakur. I'll discuss my two favorite albums by him a little bit and why his death matters even if you don't like rap.

Yeah, it's a lot of content to share, but with my new format of only posting every 2, 3, or 4 days I'm hoping you dear readers will drink down every word I type now like a rare can of Surge soda. Remember Surge? That stuff was tasty, and had more caffeine than humanly possible. Yeah, I could go for a Surge if all those cans wouldn't be super-expired. 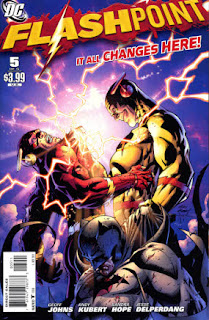 Flashpoint #5 was a decent comic, even if it pretty much consisted of Barry Allen either standing around doing nothing so Thomas Wayne could (spoiler) kill the Reverse-Flash, or Barry Allen going back in time and undoing all the trouble he caused because--TWIST!--it seems he is the one who caused this alternate reality by making it so his mom didn't die or something. Oh, and in the process these different realities come together and this mysterious woman who is appearing in all the other DC comics in a cameo (probably as a way for DC to have an emergency undo-the-recon-button) spouts some enigmatic gibberish. Then Barry Allen gives Bruce Wayne a letter from his father and Bruce cries because its sweet--of course, it technically isn't our Bruce Wayne as this is the new DC Universe, but whatever. I liked Thomas Wayne and the action was good, so I'm satisfied.
3 out of 5 stars. 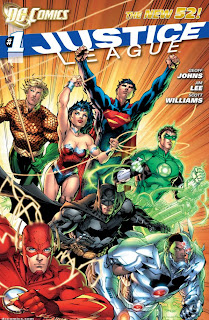 Justice League #1 is a fun Batman and Green Lantern team-up comic set in the beginning of the new DC Universe, but it isn't really a first issue of a Justice League book. At least, it doesn't feel that way. It feels like the first part of something that was written for a trade paperback and then suddenly split into a comic-book issue format--the cliffhanger is just sort of weak (Hm, Superman, a fight next issue, eh) and things seem to move sooooooo slowly. Oh, we also meet Cyborg before he becomes a Cyborg and is just really good at football. I don't know, Geoff Johns wrote both this and the Flashpoint books, and Flashpoint #1 jammed in a ton of content, whereas this just seems really decompressed--if I may use a term comic fans often employ. At least the Jim Lee art looks decent.
2.5 out of 5 stars. 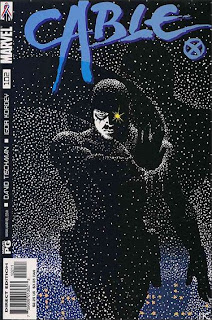 INTRO
The Hooded Utilitarian and The Factual Opinion did a series of reviews about the comic book/s Cable and its follow-up Soldier X. There was the first installment, the second, a first part to the third, a 2nd part to the third, and a fourth and final post. I've read the books because I was inspired to pick them up after initially reading this excellent article on Robot 6 long ago.

When I picked up the Cable comics the funny thing is I had to get some before its dramatic shift in focus with issue #97 that lasted to #107 (and made for some awesome comics), and boy, was it a terrible comic. Issue #96 is this lame one-off about Cable helping this ancient huge-man fight these other huge ancient huge-guys because the first one wants a doll he gave to his deceased daughter they stole. Oh, and this ancient huge-guy who has lived so long knows Cable is special because Cable beats him at arm-wrestling and no one can do that. Seriously.

The arc before that is some miserable stuff about Jean Grey having genetic Phoenix sisters or something that no other comic has ever acknowledged so just forget it and a reporter named Irene (who is in Soldier X) has to have her skin color changed from white to black so that she can avoid being killed by this evil cult and learns that racism still exists when a police officer picks on her--so we learn from the comic that racism is bad in this really ham-fisted way! Wow, how touching!

If you're going to try and talk about racism, please don't just do lame, "Hey, you know racism, yeah, it still exists, shocking, huh?" type stories with someone who was white magically becoming black and learning a valuable lesson--that is just the most cliche, "look at me, I'm a message" type story. Anyways, yeah, they were bad. However, then something awesome happens, namely issue #97 and on. 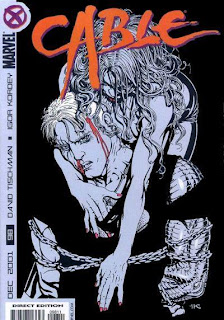 CABLE #97-107
This here is some good stuff. Basically, writer David Tischman and excellent artist Igor Kordey came in and made this comic go from horrendous to awesome in the span of one issue. Tischman took the idea that Cable is from the future, and has knowledge of how little conflicts in history could grow and become huge problems that lead to the nightmare scenario that mutants face in the future--so why wouldn't he get involved and try to fix things now? This led to Cable going into hotspots around the world and considering that Igor Kordey is himself a vetran of Balkan wars and this comic involves post-soviet areas you know this isn't too fantastical. Also, this comic was happening right around 9/11 and didn't hesitate to address it. Right on the opening of one issue is a drawing of the towers, on fire, broadcast on a television. This comic was about Cable addressing terror around the world, so it noted the fact that yes, terrorism had happened close to home too. It was a serious, clever, and beautiful-looking comic. You can actually get it collected in two trades, "Shining Path" and "The End", and I would recommend doing as such. 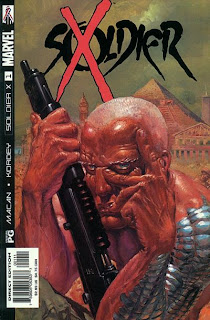 SOLDIER X #1-8
There were issues after #8, but screw them because they had writers who missed the point of the awesomeness that was Soldier X. Soldier X was half the time a parody of super-hero comics, at other times it  was about the God-complex we have in regards to super-hero characters, thinking of them as if they are religious figures, and then other times it was just about the futility of violence...in a comic about a character whose main modus operandi was violence--thereby making his own existence pointless. Then again, Cable being pointless was sort of what writer Darko Macan was going for in his darkly funny comic, almost mocking the idea of Cable while at the same time elevating him to a God-like level of power, but with the knowledge that using this power to wreak havoc just proves nothing. Igor Kordey continued to provide great art and its some super stuff. I'm sort of unique in actually maybe liking the Cable stuff a little bit more though--don't skip this Soldier X material however, it's dynamite too. 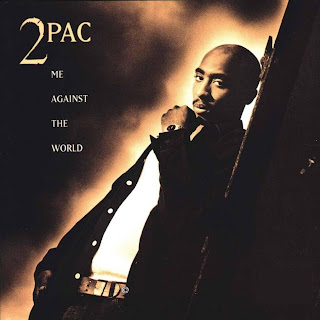 Tomorrow, September 13th, will be the 15th anniversary of the death of Tupac Shakur (June 16th, 1971-September 13th, 1996). Tupac was arguably one of the most talented music artists I've ever heard. When it comes to listing the most gifted talents in music ever some names I give in no particular order would be Mozart, Kurt Cobain, Beethoven, Bach, Andre Benjamin AKA Andre 3000 of OutKast, Miles Davis, Coltrane, and of course Tupac (there are other people I'm not listing, but you get my point for whom I think of as "cream of the crop).

Just listen to "The 7 Day Theory" AKA "Makaveli". David Brother's writes his thoughts about it beautifully on the 4thletter; it truly is an album so loaded with textual meaning you could work on "decoding" it forever. I also am a huge fan of "Me Against The World" easily saying those are my two favorite albums by Mr. Shakur. Just listen to "Death Around the Corner" and tell me the paranoia and despair doesn't seem to just hang in the air around you as the song plays--or as a complete counter, try "Dear Mama" and see just how gentle and sweet Tupac could be. In contrast, to go back to his last album he was directly involved in before his death and the first to be released posthumously, "Makaveli" has some incredibly incendiary tracks. "Bomb First (My Second Reply)" is pure fire. 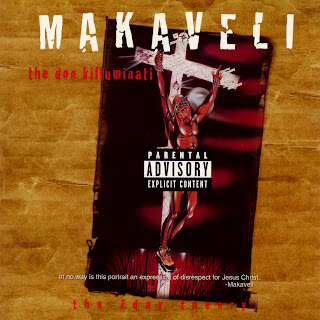 There are also some love songs. "Just Like Daddy" is both sweet and dark, talking about love and how it's pretty much about young women with daddy issues. There is also, "Me and My Girlfriend," which for those of you who are a bit slow with metaphors, is in fact about guns. Listen closely and you'll catch on. Yeah, the Jay-Z and Beyonce version completely ruined it and missed the point, but never-mind that. Don't forget the inspirational songs like, "Hold Ya Head" which even in trying to be supportive carries an air of depression--something you find often with Tupac. My point is that the man was a lyrical genius, and no slouch when it came to contributing to the production of the tracks either.

By the way, my favorite Tupac song is a tie between "Lord Knows" and "Outlaw" on "Me Against The World". A close second are both "Life Of A New Outlaw" and "Bomb First (My Second Reply)" on "The 7 Day Theory"/"Makaveli".

There is plenty more I could say about Tupac, but I just wanted to say, this was a man who had incredible lyrics that spoke so much truth, and carried so much sadness, but with a glimmer of hope--but always with that darkness. The best way to sum it up is how on, "Just Like Daddy," it is being said by a member of the Outlawz (E.D.I.) that a young woman a he met was, "A diamond in the rough, the kind that you can love, not yet touched but so much..." and at that moment we hear Tupac quietly come in saying, "Pain" before E.D.I. states, "Potential." That bit says so much, that its the pain that Tupac jumps to. There was so much sadness, but that slight tiny bit of hope he had was what made things all the more beautiful.

Then he was murdered. We still don't know for sure who did it. It happened 15 years ago tomorrow. Life is a real bitch sometimes.

Sorry to end on a downer, but sometimes that's how things are.
Posted by David Charles Bitterbaum at 10:45 PM