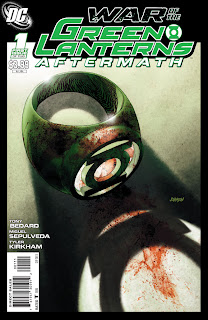 Sinestro whines about being a Green Lantern again, everyone else whines about that too, Hal Jordan whines about losing his ring, some lanterns whine about Mogo being dead...everyone whines so much if you removed the "h" I would be drunk (get it, wine? You know, like...oh, you don't think that's funny? Screw you). Really though, this was bad, and the big plan at the end to kill Sinestro obviously is going to fail seeing as how he is on the cover on Green Lantern #1 after the upcoming big DC re-launch.
1.5 out of 5 stars.
Posted by David Charles Bitterbaum at 10:48 PM