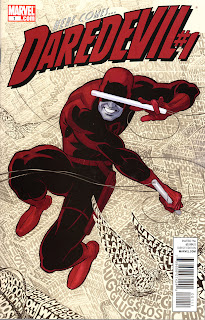 That's right, writer Mark Waid knows that after all the doom and gloom of the last decade (or decades) with Daredevil it is time to have Murdock just make the choice to try and be positive regardless of all the misery in his life that he has faced. This results in both a fun comic and an ever-so-slight dark undertone of how Matt is pretty much just living in denial, which he kind of admits in the back-up strip where he explains his new sugary view on life:

Mark Waid is a great writer and he makes the comic just plain fun, playing with the idea that the fact that Matt Murdock is Daredevil is now an open secret that people can't quite prove, but everyone knows, and throws in actual humor, something I don't think we got much of in Daredevil ever (I remember ONE joke from all of the Bendis-Brubaker-Diggle era, and it was when Bendis has Daredevil make a crack that he thought the costume was still yellow and not red....yeah, lame joke). It's a great time, and the idea that other heroes aren't going to just accept Matt Murdock suddenly coming back and acting like everything is hunky-dory is clearly going to be explored as the cliffhanger at the end of this issue teases. 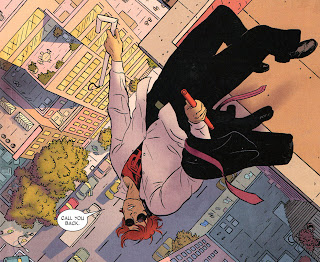 You know what the best part about all this is? This comic may have cost $3.99 but it came with a bunch of extra pages, and all the upcoming issues are going to be just $2.99! Yah, Marvel is being reasonable and I can read this comic without hesitation because I really like the writing of Mark Waid and Daredevil when he is done well (I did love the Bendis and Brubaker stuff even if it was horribly dark, Diggle's started strong but ended in a fiery pit of horror with the crap known as Shadowland). Yes, I will be reading this comic because at just $2.99, with art that is quite good, and writing this expertly done I can't wait to see what kind of adventures Matthew Murdock gets up to in the courtroom and as Daredevil.
4.5 out of 5 stars.
Posted by David Charles Bitterbaum at 11:34 AM