My Wife and I Tried, "Hello Fresh," and Have some Initial Thoughts

My wife and I had a referral code which allowed us to try, "Hello Fresh," for free for a week. We thought we would give it a go along with an extra week or two. We just completed our first week of three meals and I thought sharing some initial thoughts on the service would be fun.

We went with three meals per week, as I mentioned, and the food arrived on a Saturday the 22nd not too long after we ordered it and made our selections. We opened our front door to find a massive box on our porch-area and brought it inside. We were a little concerned if everything had stayed cold as this was one of those recent 100+ degree days that afflicted America. Impressively, between the insulation and a ton of ice-packs everything was still nicely cool on top and the frozen items packed in even more ice packs near the bottom were still solidly frozen too. The three meals we selected were the following which I'll list below their website-picture and say what day we ate them:

As you can see we didn't eat one of our meals Tuesday. That is because we were tired and took advantage of the wing deal at Buffalo Wild Wings on Tuesday. I'll give an overall review score at the end but thought it might be fun to discuss in further detail each entree item.
The Chicken Scallopini was solid but not amazing. The skillet zucchini and basmati rice complimented the chicken well, but the sauce needed a lot of seasoning to have enough flavor. The chicken itself cooked very nicely however.

One thing I have to admit is I did water the sauce down a little more than I was supposed to by adding too much water (I mis-measured the cups, I'm clearly not a professional chef), so maybe the sauce not being flavorful enough was kind of my fault, but once we threw in a little more flour it thickened-up nicely and still needed plenty of salt and pepper. Decent but not especially inspiring.
The Pork Tenderloin was delicious. We were pleased that the Teriyaki flavor wasn't too strong and instead tasted just right. The asparagus and rice all mixed in the bowl with the pork created some great flavor and this was probably our favorite dish.

It is worth noting that the produce pretty impressively lasted a number of days and only had a little bit of spoiling occurring. The asparagus was still looking relatively tasty when we cut it up and I got to learn what, "Blanching," was when we did that to the aforementioned asparagus. 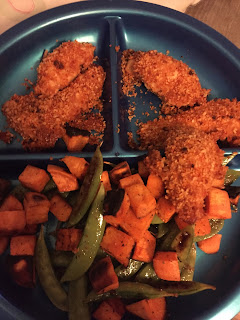 While our meals the other two days involved a lot of stove-top usage, the tenders and veggies meal actually was a fully oven-based affair. We waited to do the tenders till late in the week because of how hot it had been earlier-on (and it thankfully cooled down enough to use the oven by Thursday).
My wife and I were impressed by how almost every ingredient needed came in our Hello Fresh package, with only the most common stuff not being provided (e.g. olive oil, salt, pepper, and whatnot). The directions for how to make the food were usually concise and even someone relatively inexperienced at cooking such as myself was able to understand what needed to be done most of the time--and Samii helped guide me through any other parts I was confused about while we cooked it up together.

We are excited to try Hello Fresh for at least another week and changed our preferred delivery day to Tuesday so that we can enjoy our meals during the rest of the weekdays. We were quite pleased with our meals if not especially amazed (although that Teriyaki Pork was, "Lit," as the kids apparently say these days). The directions were straightforward, the ingredients all were of good quality and stayed mostly fresh, and the food was usually flavorful. Taking into account all of these factors my wife and I both agree that a rating of 3.5 out of 5 stars is apt.

Should you be interested in trying it you can of course visit the website here and if you use the promo code, "SAMIIA," you can get $40 off your first order.
Posted by David Charles Bitterbaum at 2:44 PM