I Attended, "Geeklesque," a Mixture of Humor, Titillation, and Nerd References 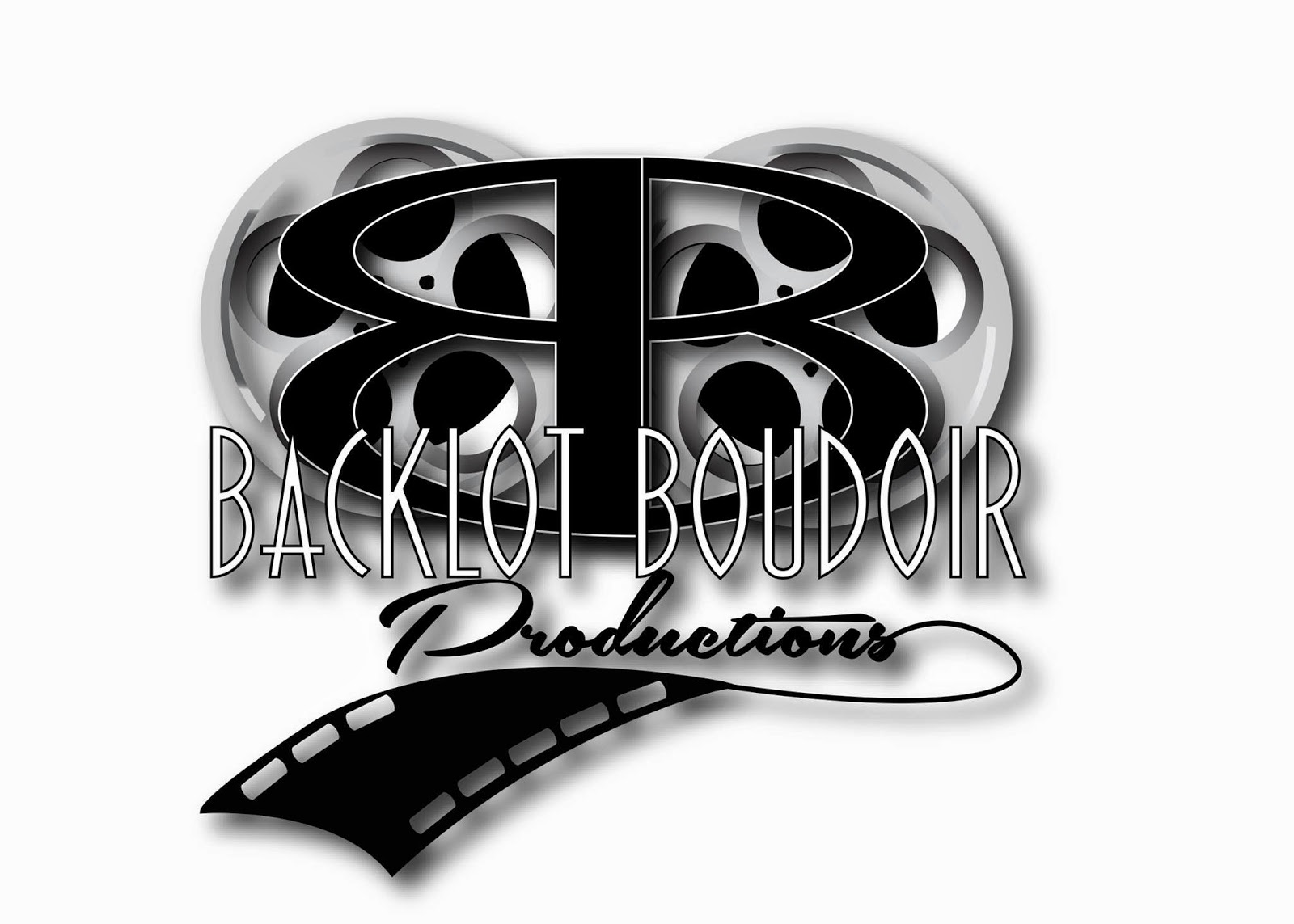 On Saturday, July 26th, I attended a burlesque show put-on by, "Backlot Boudoir," (Facebook page here) with a geek/nerd-theme. It had the fitting title, "Geeklesque," and I had heard about it via an email from a comic-book shop that was going to have some of the cast there to promote the show a few days before its occurrence. I went to the shop and chatted with the producer/MC of the show, Elliot, and it sounded fun so I went and brought my lady & some friends!
"Geeklesque" was at a location known as "The Stratford Inn" a bit outside of Saint Louis. When we arrived approximately an hour before the show there was a large but already-packed lot. We made our way to the front entrance and walked through a very large bar to a busy back-room. Well, back-room makes it sound small, and this room was actually huge. Officially called, "The Ballroom," the walls were a striking dark black with comic-themed decorations stuck-upon them such as brightly-colored, "Bams," "Zaps," and a Batman logo. Servers were offering drink specials to those who didn't feel like walking over to the bar and some vendors near the front where we entered the room were hawking their wares. 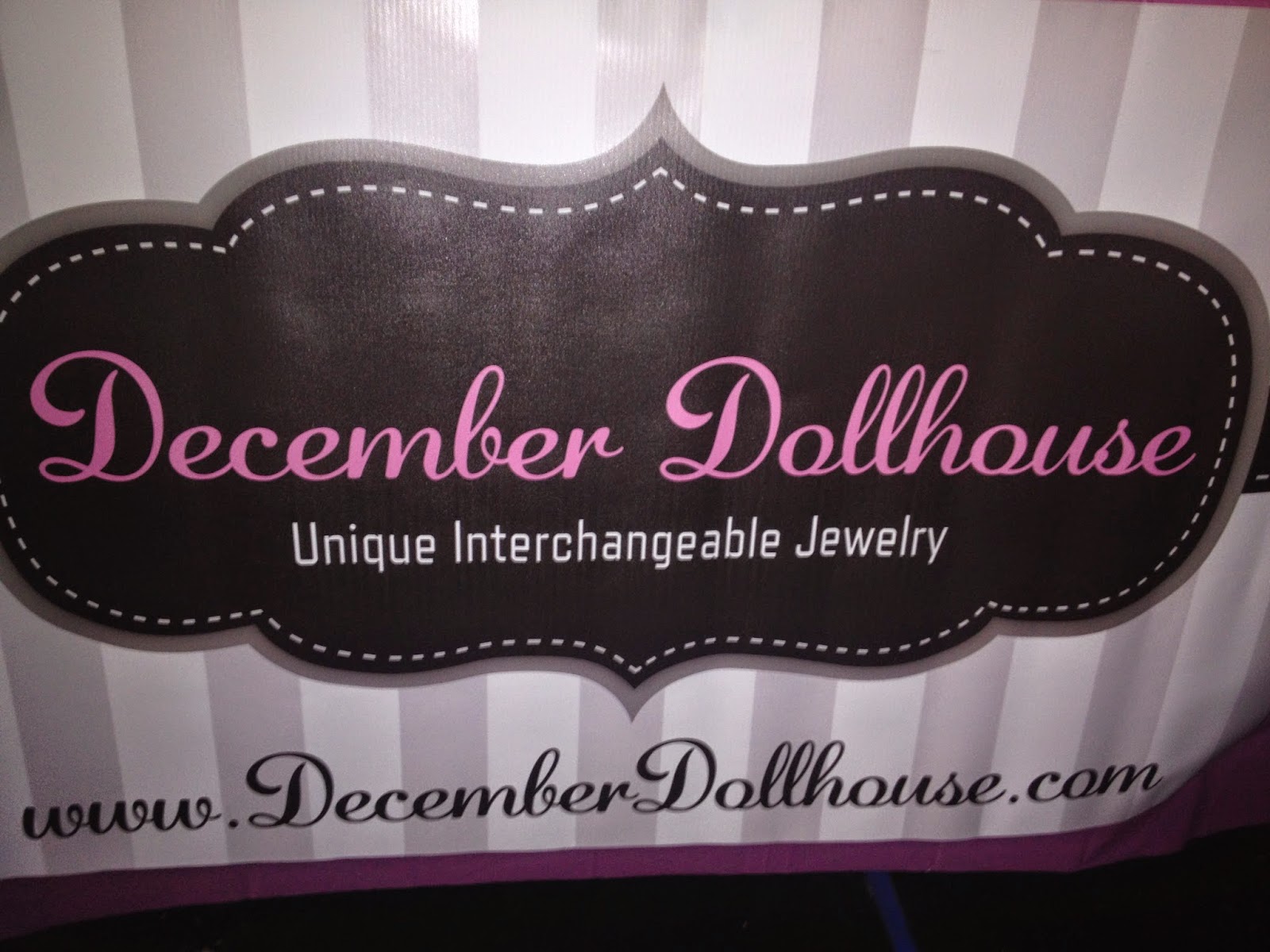 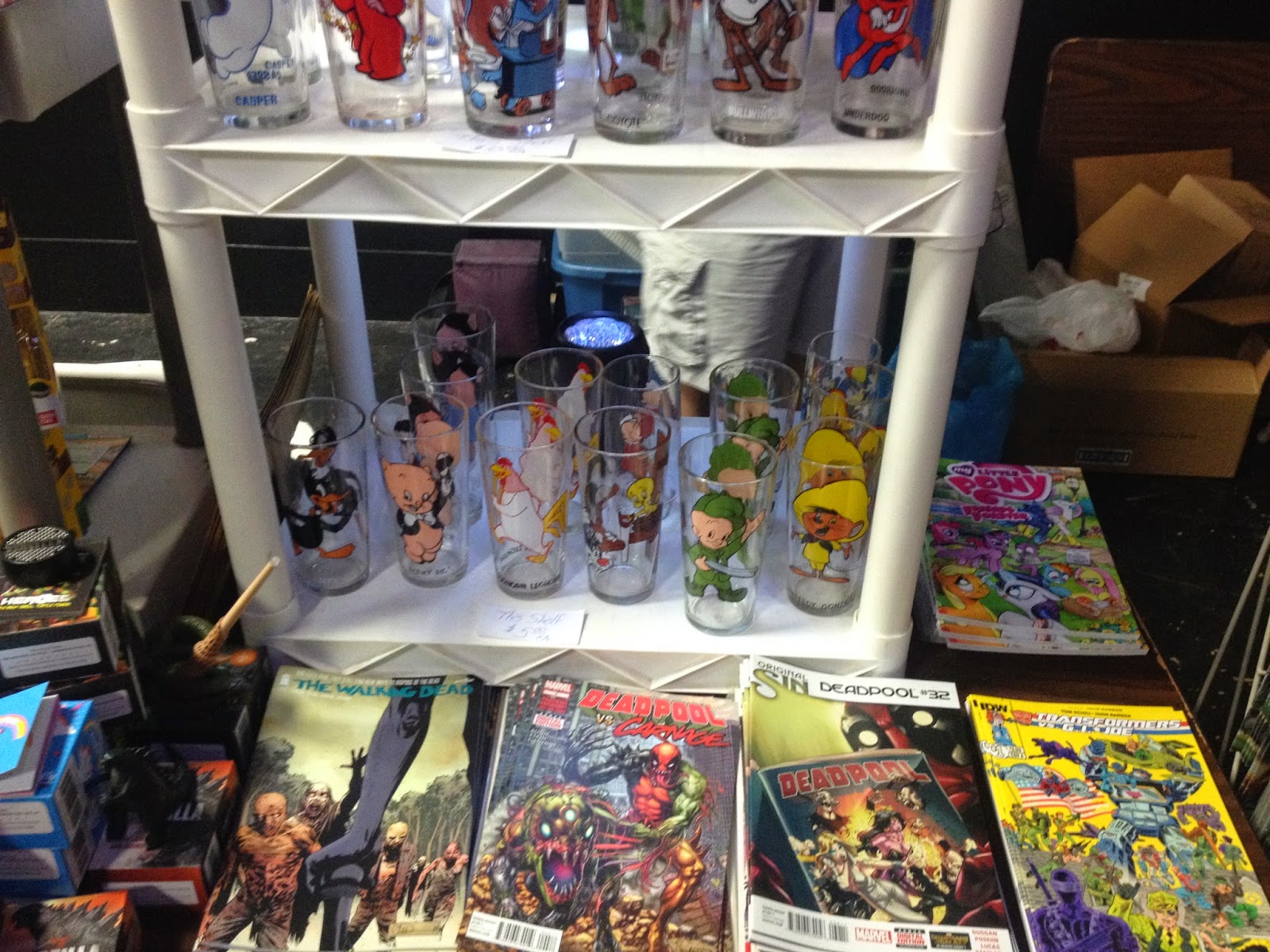 The Show
After relaxing and chatting with my chums who came to the event for a bit the show started in earnest. The producer/MC I mentioned earlier, Elliot, got the crowd riled up and then the entire troupe of the burlesque dancers came out for a Pokemon bit. It was cute and definitely made it clear the show was going to be a fun night of nerdiness.
After the opening bit Elliot talked for a tad and then the next segment began, a solo-performance with the theme of "Captain America" where the fun song from the 1st movie played. 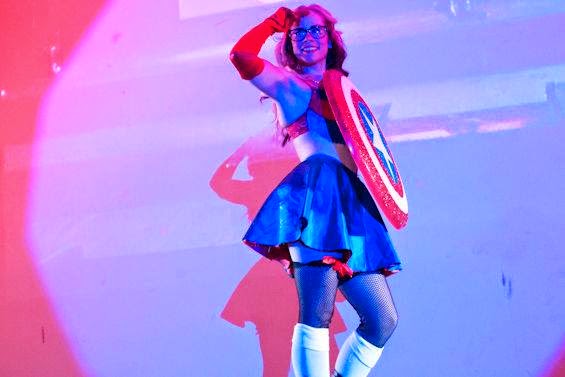 Following that, Elliot had an "argument" with a faux-Captain Picard about a lack of "Star Trek" references having occurred so far before two of the performers engaged in a Harry Potter-themed duel with wands, jumping around, and other dramatic flair. 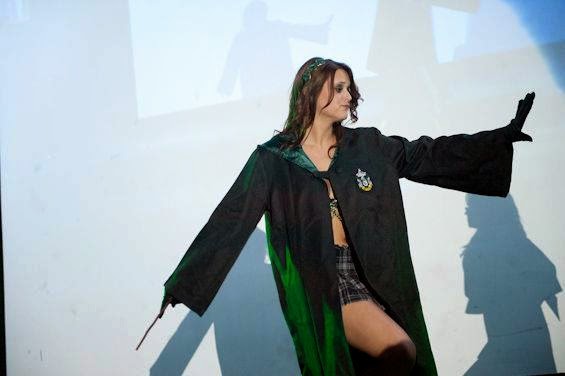 Next up, a contortionist named Felix who has apparently performed with Cirque Du Soleil showed off his skills whilst wearing Spider-Man face-paint. 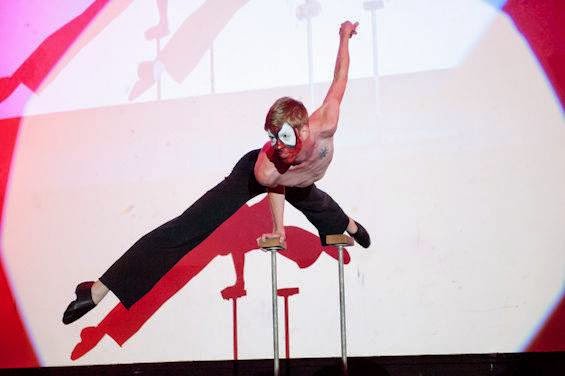 Then there was a She-Hulk meets Nutcracker routine that was fascinatingly weird and a "Star Wars" segment with one of the performers as a sexy Boba-Fett. 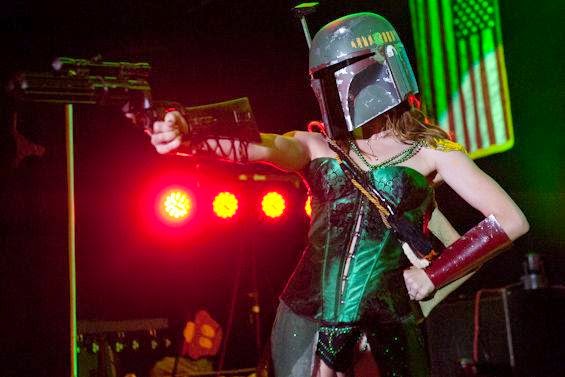 Elliot and his wife who uses the stage-name, "Sugar Siren" then engaged in a bit where they yelled at one another and she started to walk away as he sang, "Turn Around" and they sang the song before segueing into a hilarious rendition of, "Paradise by the Dashboard Light/Let me Sleep on It". Afterwards a lady performed who used a hula-hoop to create all kinds of cool imagery as it spun--and then spun a fiery-hoop whilst literally setting her pasties on fire. The first half of the show ended with a four-person performance with the cast dressed as Harely Quinn, Poison Ivy, and Catwoman, engaging in a fight with Batgirl. It was fun! 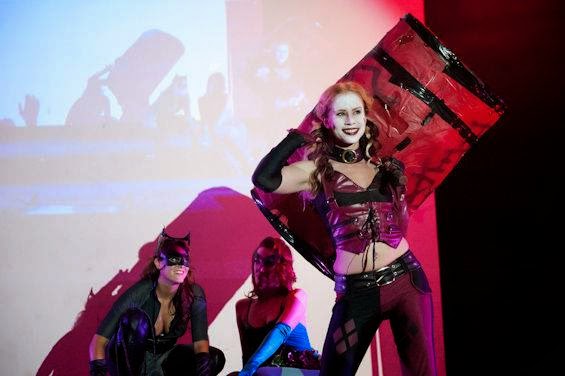 Next up was intermission which featured seven audience volunteers competing to see who could eat a banana in the most sexual-way possible. A man dressed as a cowboy-esque Deadpool was incredible and easily won. 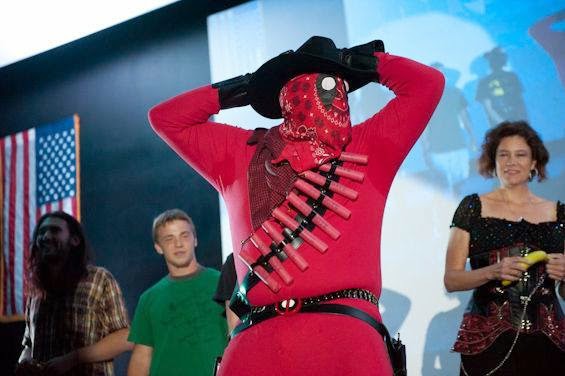 This was followed by a costume-contest where a woman dressed as a humanoid Okami won thanks to her well-designed outfit. The show returned from intermission with a bunch of the performers dressed as the Teenage Mutant Ninja Turtles dancing to the infamous "Ninja Turtle Rap" by Vanilla Ice. A funny choice. 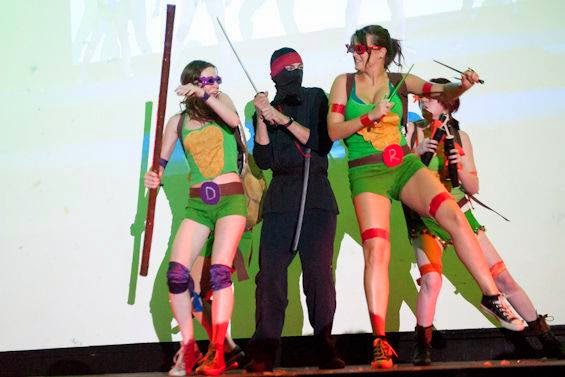 This was followed by a Zela-bit where Link, played by, "Dante, The Virgin," stripped down to his underwear and did all kinds of crazy somersaults and flips. It was impressive! 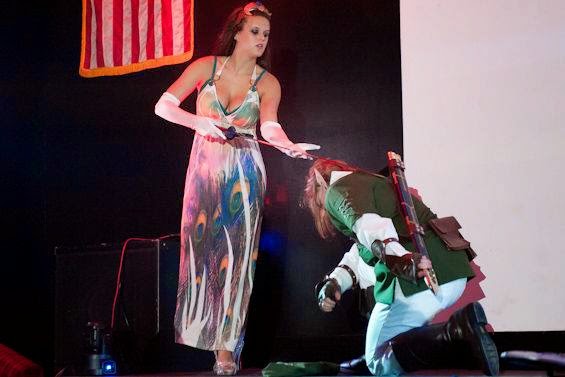 Elliot then introduced us to a "Mortalk Kombat" segment with a performer dressed as the character "Mileena" and posing around on a chair, it was inventive. 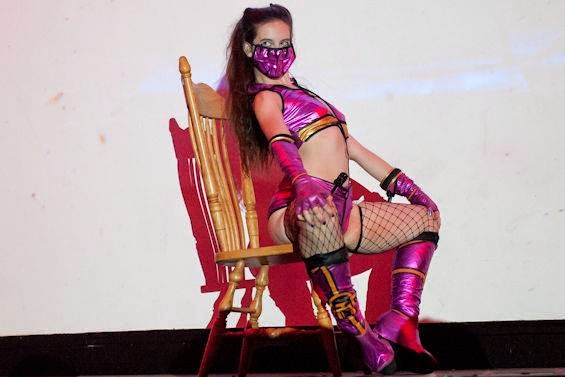 Felix  returned to hang from the ceiling with fabric ropes and really impress with his amazing strength to dangle from nothing more than his arms or at one point solely his neck. 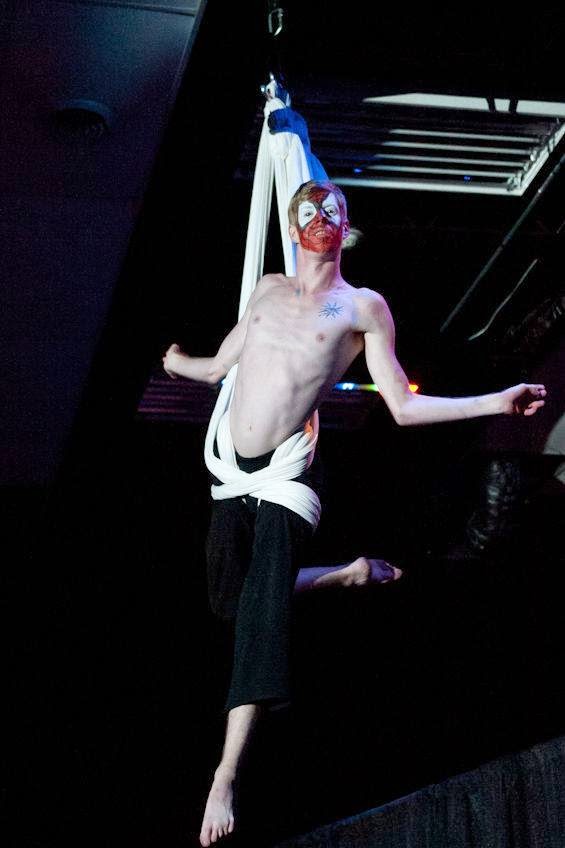 Next there was a performance with one of the ladies as Lara Croft, doing some impressive gymnastic stunts befitting the character. 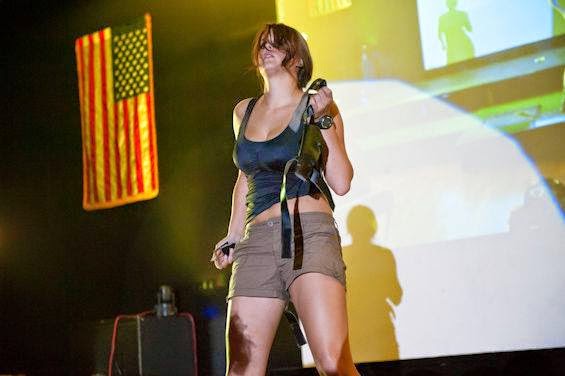 Nearing the end of the show, Sugar Siren sang again with "Come on, Eileen," and was followed by an awesome segment with the Super Mario Brothers theme. The two performers re-enacted various famous Mario-elements such as bumping their head on boxes for coins, swimming in the 8-bit ocean, and showing-up Bowser. It was my lady's favorite bit as she loves the old-school Mario games. 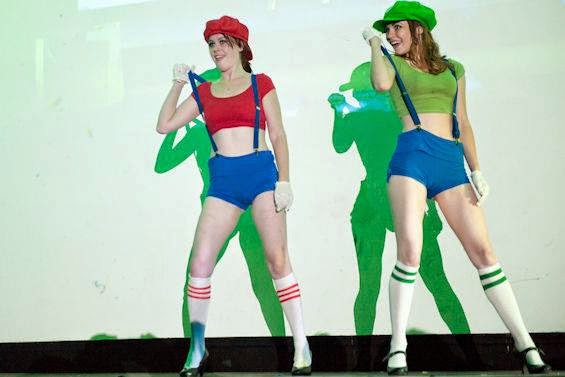 The final scene of the show then occurred, with the whole cast coming out in their various outfits from the production and danging about to a techno-influenced version of the "Star Wars" cantina theme. It was an energetic and exciting way to end the show.

My Overall Thoughts on the Show
I really enjoyed "Geeklesque". Backlot Boudoir have been around for a bit, but this was their performance I had ever attended and I'm glad I did! My friends who went with us had a great time too, agreeing with my opinion that the variety of geek-themes mixed with comedy and gymnastics resulted in a show that moved at a good pace, stayed fresh, and most importantly of all was entertaining.

The outfits were great, the choreography was both inventive and sexy, and the crowd ate-up all the geeky in-jokes. It was a superb experience and I along with everyone I brought had a wonderful time. Should you live in the area and want to catch any future-shows by Backlot Boudoir you can read about their upcoming October show with a Halloween and murder-mystery theme. Also, they have a Kickstarter currently going to raise funds in an effort to increase production values and other features for future shows. Lastly, you can follow Backlot Boudoir on twitter here. Check them out and go to a show!
Posted by David Charles Bitterbaum at 6:10 PM