My Spoiler-Free, Honest Take On The Avengers? Pretty Great. 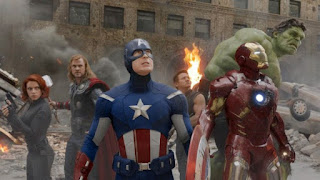 So, I saw the Avengers at a midnight premiere last night/early this morning (if you want to be specific). I shall share my thoughts with you now. I can say that this movie was yes, pretty great. It's up there with the first Iron Man in terms of quality. The amazing thing is they were able to take all these huge characters and put them together in a movie and make it feel like each got enough time to breathe (except maybe Hawkeye who sort of gets the shaft--get it? He's an archer and I said shaft? Yeah, I'm lame). Much of the credit for this film being as good as it is goes to director Joss Whedon. You can feel his presence in the film for sure, especially in all the hilarious one-liners sprinkled throughout. Seriously, this movie has some moments that are absolutely laugh-out-loud hilarious besides the usual drama and action.

Oh, and what action there is. Things explode, guns fire, people punch, and a Hulk most definitely does smash. I would say Captain America and Iron Man are the best characters in the movie, with Thor and the Hulk doing a great job and the Black Widow and especially Hawkeye seeming a bit like an afterthought. As for Samuel L. Jackson as Nick Fury, he is quite delightful getting genuine screen-time as opposed to his mostly-cameos in the Marvel flicks leading up to this.

My complaints are minor. Even though pretty much all the characters shine you still really want to to see more of them, and that big battle in NYC (this isn't a spoiler, any preview makes it clear there is big fighting in NYC) seems to start to drag after a little bit. Yes, it looks impressive and is interesting, but it just keeps going and going. Also, whereas Loki seemed a bit more nuanced in Thor, in Avengers he seems more just straight-up evil and maniacal as opposed to deeply emotional sad and complex in addition to evil. Still, this is one stellar flick and quite worth seeing. Oh, but make sure you stay until completely after the credits. Even if you think everything extra is done during the credits, stay until completely after the movie if you truly want to see everything in the film.
4.5 out of 5 stars.
Posted by David Charles Bitterbaum at 11:36 PM