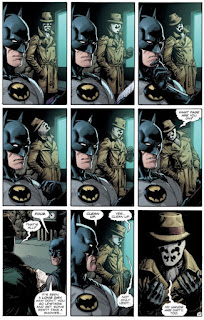 "Doomsday Clock," as a title published by DC Comics sounded like such a loaded proposition. A sequel to, "Watchmen," of sorts that links it and the, "Regular," DC Universe could be an utter travesty, after all. There is the fact that Alan Moore has been against all the things DC has done with the, "Watchmen," property, rightly feeling what should have become a creator-owned property was ripped-out from under him once it had success. Also, "Watchmen," is in most ways a masterpiece--albeit an admittedly flawed one with a slightly weak ending and some boneheaded ideas about sexual violence. That said, I was moderately impressed with the first issue of, "Doomsday Clock," as I saw some potential there with the story appearing to be done the one way I think it could work, and that trend has continued.

This comic would suck if it just had been an example of, "Wouldn't it be cool if Rorschach and Batman fought while Doctor Manhattan and Superman fought?" However, if you get kind of meta and point-out how, "Watchmen," as a comic very much so changed all other comics with its existence things get interesting--an idea clearly being explored with its repeatedly discussed how DC's normal world strikes the characters of, "Watchmen," as a hilariously basic Good versus Evil, black-and-white, when these characters think of themselves as existing in shades of gray. The idea that Doctor Manhattan is hiding somewhere in the DCU as it fits his hopes for a simpler world is both incredibly self-aware of DC to print discussion of and almost a little self-deprecating in a way--I appreciate them not protesting writer Geoff Johns doing this. Using, "Doomsday Clock," to create a commentary on comics themselves--much as, "Watchmen," did back in the 80's allows the book to actually kid of, "Work," and not just seem like a big indulgence in fan-service for the sake of a cash-grab (like how, "Before Watchmen," was atrocious and thankfully is basically not in the continuity of all this).
"Doomsday Clock," is still an affront to the wishes of Alan Moore, but it is doing things the one way it could to kind of get away with being as tasteless as it is clever. Plus, artist Gary Frank is a genius and makes everything look amazing regardless of if it is characters simply talking or a page utilizing the familiar nine-panel grid of, "Watchmen," to illustrate Batman being beat-up and battered by an angry crowd. The book is by no means perfect, with an element about how most superheroes are American and it might be a conspiracy being a subplot that is simmering away but not yet at a boil, and a new wrinkle of Black Adam popping-up talking about a super-powered country unclear in what role it will play in the comic. Also, yet another side-element of the JSA from the past/another timeline and Saturn Girl from yet another timeline/possible future is making things extra dense as, "Doomsday Clock," threatens to buckle under the numerous stories all occurring at once. Oh, and I didn't even mention the weird duo of costumed criminals (Marionette and Mime) retroactively created as existing within the, "Watchmen World," and who are just kind of sauntering around looking for the Joker for...reasons?

As of now the plots seem to be very carefully balancing themselves out but I worry things will collapse into a confusing mess. The fact issue #4 was focused mainly upon one character (Rorschach and who this seemingly new version of the hero is) made things nice and simple compared to the sheer volume of stuff occurring before it and in the most recent issue #5. We are about at the halfway-point of this 12-issue maxi-series however and things are working well so far, so I'm optimistic. My hope is that "Doomsday Clock," will keep chugging along nicely despite it already suffering a number of annoying delays that kind of hurt its momentum. Again though, the biggest takeaway here is how astounding it is that, "Doomsday Clock," has been good. Here's hoping once it is finished and collected in a nice big trade paperback it all still holds together nicely.
Posted by David Charles Bitterbaum at 2:33 PM