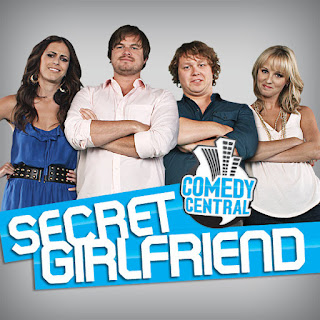 I thought about doing this as a, "Television Tuesday," post but it so old, "Flashback Friday," makes more sense. Okay, so there was a television show that had a short six-episode first season on Comedy Central and then disappeared from the memories of basically everyone but myself and maybe a handful of other folk. It aired from October of 2009 to November of 2009, so short-lived is an understatement. It was both brilliant and quirky at times when not being completely and utterly terrible. It was disgustingly sexist yet almost self-aware enough when it was being that way as to make you think it had a clever message...it probably didn't though. It was "Secret Girlfriend," and its whole saga is downright weird.

Apparently, "Secret Girlfriend," was at first a series of comedic web-shorts on the now long-defunct, "Atomic Wedgie," website. You see, kids, back before YouTube there were various websites that would have their staff post random cartoon shorts or live-action stuff. You had to actually buy bandwidth and junk if you wanted a video online, you couldn't just use YouTube for free in hopes of becoming internet-famous. These, "Secret Girlfriend," web-shorts featured the viewer as the main-character in a point-of-view fashion where women flirted with you and acted in various silly ways whilst getting disrobed to an appropriately PG-13 degree. Anyways, the web-bits were popular enough that Comedy Central paid a little bit of money for a show to be made titled--you guessed it--"Secret Girlfriend."
As the opening credits of every episode of, "Secret Girlfriend," tell you, the main character of the show is you, the viewer. Well, kinda. Basically, you're apparently this super-sexy, funny, smart, charming guy who women stare at lustfully. Also, you leer at women constantly, looking at their asses, breasts, and if they notice you doing so they just smile. It's a textbook example of the male gaze because you literally are nothing more than a male gazing, according to the concept of the show. You have an ex-girlfriend named Mandy (Alexis Krause) who is so over-the-top viewers are supposed to hate her, but she actually kind of has a point about your character being awful considering how much, "You," cheat on her--you're supposedly broken-up but always have sex with her when the chance arises. There is also a girl named Jessica (Sara Fletcher) you meet in the first episode and who is probably the only female character ever developed to be more than one-dimensional. She's funny, clever, and logical. Lastly, there are your two best friends, Sam (Michael Blaiklock) and Phil (Derek Miller). The majority of what I like in the show is thanks to them.

"You," never speak during, "Secret Girlfriend." Your face or hands are never even visible but sometimes a phone will pop-up to indicate you're texting. The show will do quick little cuts where if someone asks you question it then jumps to a few moments later when that person reacts to what you said. Basically, you're silent but assured by the show that you're hilarious, sexy, and desirable to many, many women. Every episode has some kind of PG-13 sex-scene where there is suggestive moaning and close-ups on a woman's face as she looks ecstatic. It is tacky and dumb. Yet, then we have Phil and Sam, and goddamn if they aren't hilarious. Apparently some of the writers behind this show went on to work at other programs I've loved such as, "It's Always Sunny in Philadelphia," or, "Arrested Development," and the hi-jinks we witness, "You," Sam, and Phil get up to reflect some of that in the quirky humor. 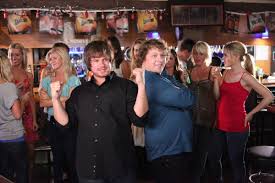 In one episode the guys come-up with an idea to make a web video promoting a strip club's incredibly tasty buffet. Sam poses as a big baby with green-screen over his mouth so they can make him talk. It is pointed out he can actually talk repeatedly to humorous effect. In another episode Sam and Phil adopt a dog they name, "Chill," as it is incredibly lazy. They push it around on pallet or in a shopping cart. He dies suddenly a few days after being adopted and we get a touching montage of the limited footage they made with him and a picture of the empty pallet with text honoring how Chill lived with the guys, "Wednesday-Friday." Oh, and there is when Phil realizes his phone number is similar to a crisis hotline and uses that fact to hook-up with women and even make a commercial about it...until he gets in trouble, at which point he makes another commercial about how he is sorry and needs a kind woman to help better him (and of course sleep with him). Not all of the jokes involve Sam and Phil, but many of the best ones do (although I did love when Mandy meets Jessica and a lie is concocted to claim she is your cousin...which results in Mandy oddly getting more jealous before singing a song about the dangers of incest at an open-mic night). Sam and Phil are not good people, they are pretty awful much like the characters on, "Sunny." They're funny though.

Also, one interesting wrinkle to things is how it is strongly implied that Sam and Phil are not merely platonic but might in fact be together. They always talk about finding women, yet in one episode Phil mentions having dated men, and in another when mourning the death of their dog, Sam and Phil hug closely and almost kiss. They make jokes about how masturbation is, "Gay," because you're touching another man's penis, but even if it is gay they don't mind for...reasons. The concept of Sam and Phil possibly being bisexual is plainly there, but never played for laughs so much as just an idea that's more than hinted at, but not completely present. It's weirdly progressive for a show that treats women mostly as sexual objects--except for some lesbian characters who are understood to not be into men, but are still fun to watch kiss, as Sam and Phil declare.
One saving grace for all the sexism becomes apparent in the final and sixth episode where it is actually hinted that maybe--just maybe--your character is the bad guy. You see, at the end of episode five Jessica has broken-up with an on-again-off-again boyfriend and is ready to be with you. This results in you finally having had sex with her during episode six and things seeming actually pretty swell. She is an awesome person after-all, as the show has made apparent. The thing is, you still keep leering at other women, and Sam and Phil talk about how you've never been the kind to be tied-down. Then in the final moments of the episode Jessica and Mandy get into a brawl that results in them falling into a pool as they fight, and a neighbor of yours who we have seen at times during the season notices you at the party and asks if you want to leave with her...then the show cuts to black.

Based on the past actions, "You," have taken all season this episode puts a lot in perspective. I mean, Mandy maybe was kinda crazy but you were always still leading her on with sex whilst hooking up with other women. Jessica is the girl you've supposedly longed after for quite a bit of time, but once she's actually with you it is easy to throw it all away. Is it possible that, "Secret Girlfriend," has maybe, just maybe been quietly and expertly laying the groundwork to help viewers conclude in the end how all along it turns out, "You," aren't as awesome, desirable, and stellar as you've been led to believe? Maybe you're actually just a jerk who uses women and then ditches them? Is the final twist that this show loaded with crass jokes, sexist imagery, and which as I said is basically the male gaze distilled into its purest form turns out to be weirdly self-aware and making a cynical and dark comment, as the bits with Phil and Sam hinted at? I guess its possible, or maybe the show really was just kind of like a raunchy beer ad from the 2000's stretched-out into a half-hour with the occasional brilliant joke mixed-in between all the offensive misogyny. Six of one, half a dozen of the other, I guess.
"Secret Girlfriend," probably was destined to only last one short season. It was just too weird for many people and the gimmick of, "You," being the main character would have worn thin the longer they kept it going. The actors involved in the show went on to do other things and probably rarely even think about this series. Oh, although we do see Tiffany Haddish too, who has a tiny bit-role from long before she became famous in the first episode as a drunk co-worker of Jessica who hits on you. The series can be bought and downloaded on iTunes or via Amazon's digital options and if you want to witness something phenomenally weird I'd encourage you to check it out.
Posted by David Charles Bitterbaum at 12:33 AM