People Either Love or Hate the New, "Star Wars," Flick 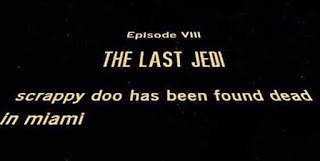 First off, this post does not actually have any spoilers for, "Star Wars Episode 8: The Last Jedi," outside of that joke one at the top (poor Scrappy Doo). Also, I need to share that I have not in fact seen the movie because I ain't been to the movies in months and Redbox works just fine if you're patient enough to wait a bit for the DVD release. All of that said, I have been fascinated by how divided opinion has been with the latest, "Star Wars," movie. Directed by Rian Johnson--whom I'll always respect for his stellar, "Brick," and "Looper," movies--I've observed people who were lukewarm on the 7th movie, "The Force Awakens," seem to love this, and fans of that movie are decrying this as subpar. Johnson to his credit has taken criticism in stride and at the end of the day Disney is happy because they made a bucketload of cash.

I was curious about why folk might have such varied opinions so I reached-out to my friends and asked them for their thoughts. My chum Justin actually disclosed he sought-out spoilers before he saw the movie so that he would know what to expect and not get his hopes absurdly high. He loved the movie and was glad he did that. My friend Sarah however was extremely disappointed. She told me that while she loved Episode 7, this one, "Felt too Disney," and seemed more concerned with introducing new characters to sell merchandise than continuing the past stories (something which some reviewers loved and other people have also disliked). That said, she and everyone else seemed to like the Porgs and didn't think they were overused.
From talking with my friends I honestly am not any clearer on why the movie has split folk so much. The very thing some of my friends told me they hated other friends adored. I guess I'll just need to see this here movie and form my opinion. Whatever the case, I thank everyone who spoke with me for sharing their thoughts and hope to see, "Star Wars Episode VIII," before too long!
Posted by David Charles Bitterbaum at 8:23 PM