Thoughts on More Books From my Local Libraries

Gotta Love the Library!
I continue to love my local County and City library, immensely enjoying utilizing them to check-out and read a variety of books. Whether anthropological histories, neat comics, or guides for screen-free activities I can do with my son as he grows older, the library has a lot of useful stuff! I'm not going to review these books per-se so much as some discussion about them as I pretty much liked everything I picked-up and am talking about here (stuff I felt like I didn't like was quickly skimmed and returned; hence, I don't mention those materials as I would need to read more to have a solid opinion). 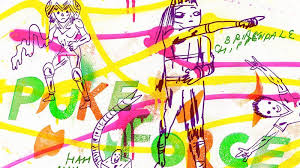 Puke Force
by Brian Chippendale
I had read a lot of reviews online talking about how the intentionally busy and ugly artwork mixed with satire results in a fascinating collection of comics in Brian Chippendale's, "Puke Force." Hideous drawings of people and human-esque monsters in, "Grave City," are complimented by prickly Liberals, paranoid Right-Wingers, snarky tech-users, well-meaning hero-teams who seem pretty habitually lazy, and craven politicians (of course). Everything is just so busy in how it looks in the art and the ideas come a mile-a-minute in this surrealist masterpiece of showing a world that really sucks and shows what ours could become if we aren't careful. Basically nobody is safe from Chippendale's searing critique and God is it ugly-yet-beautiful. This book is by no means easy to read in how its formatting literally requires you to look at a legend for every page so you know the order to look at panels, or in the sense of how much content it covers and satirizes. It is for sure a rewarding book to read, however. I have found, "Puke Force," available for sale at Amazon and Things From Another World. 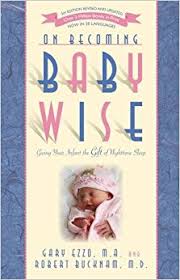 On Becoming Baby Wise: Giving Your Infant the Gift of Nighttime Sleep
by Gary Ezzo and Robert Bucknam
Parents often talk about how their babies won't sleep well through the night, and how it is a huge pain. We actually were both lucky and skilled in that with minimal work we have been able to get it where Clarkson generally will fall asleep sometime between 10:00 PM to right before midnight and sleep until 7:00 AM-8:00 AM or so. We actually did some of the things discussed in this book before I even read it, which shows we and the publication are both on the right track! Basically, the idea is that you don't just feed your baby if he has some cues, or based on time, you consider a mixture of elements, such as if the baby is really upset and clearly crying, or just showing some cues, how long it has been since he slept, and go from there to establish a clear sleep-wake-feed schedule over time so your baby knows he'll eat more during the day, have an extended period of sleep at night, and so forth.

There are other good pieces of general child-raising advice and feeding is covered in-depth too because when your child eats has major implications for when he wants to sleep as well. It all makes perfect sense and is invaluable advice for those parents who find their child refuses to sleep much of the night and want to work towards creating a a better cycle of nighttime sleeping and being awake during more of the day (with naps of course still playing a significant role, don't think your baby shall just be awake all day and sleep all night until he/she is much older). Should your baby be keeping you up all hours of the night consider this book mandatory reading. You can find the book on Amazon here. 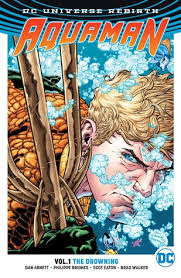 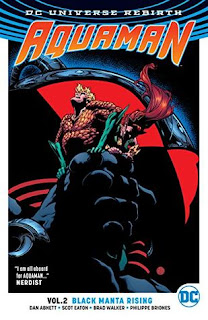 Aquaman Volume 1: The Drowning
Aquaman Volume 2: Black Manta Rising
by Dan Abnett (writer), Scott Eaton, and Brad Walker (artists)
I've seen Aquaman written a number of ways, from the caring king who is good-natured to the sour-faced and cranky portrayal that we recently had under Geoff Johns. For DC's big, "Rebirth," re-launch writer Dan Abnett strikes a good balance between these personalities, giving us an Aquaman who is kind, but won't hesitate to get mad and punch Superman if need be. Throughout these two volumes we watch as Arthur Curry and Black Manta actually settle their blood feud in a surprising occurrence--but as the story continues it is all too clear that when Black Manta isn't trying to just kill Aquaman and being made fun of for losing to the, "Fish-Man," he is someone who poses a much larger threat to the world.

Scott Eaton and Brad Walker seem to split art-duty and have a similar enough art-style that the changes in issues is never to jarring. The art lacks much attention-grabbing imagery actually, but my eyes weren't bleeding from reading the comic, so while that is kind of damning with faint praise, the art was fine. Between the pleasant art and strong writing this current story about the King of Atlantis has impressed me and made me eager to read more Aquaman--so that's impressive in and of itself.
You can buy the first trade via Amazon or Things From Another World, and the second trade is of course on Amazon and at Things From Another World as well. 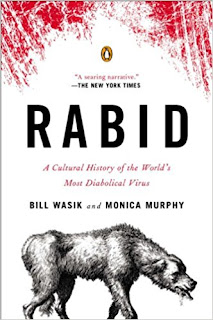 Rabid: A Cultural History of the World's Most Diabolical Virus
by Bill Wasik and Monica Murphy
This is a book that is depressing as it is interesting. Wasik and Murphy follow Rabies from its earliest discussions in history up to how its viewed now. A, "Most Diabolical Virus," it is fascinating to read of how it baffled early doctors with its violent and wild mystique and even today is sometimes misunderstood with even cures exaggerated (you don't need countless shots in the stomach if you're exposed, a myth that persists even now). There are many morbid accounts in the book of how rabies impacted our planet, and an interesting theme emerges of how in some ways rabies is terrifying because it takes our ideas of modernization and domestication and tears it down into a wild and dangerous primal thing. I would for sure recommend getting a copy are your library or purchasing the book on Amazon. 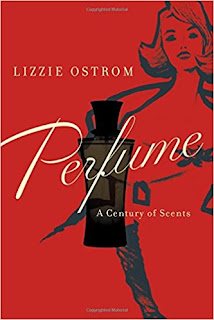 Perfume: A Century of Scents
by Lizzie Ostrom
Moving from rabies to something a bit less depressing but just as fascinating, we have this book which breaks-down various scents from the early 1900's up to near the present day. Most of us may just think of perfume as something we splash on to smell good, but Ostrom's exhaustive research shows how the scents of an era can tell us a lot about its history, culture, and the like. It's an interesting book as it breaks-down decades into certain perfumes, displaying how something we would barely consider--scents--can be a reflection of so much. It is a fun read and you can always buy it on Amazon. 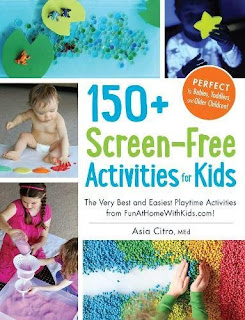 150+ Screen-Free Activities for Kids
by Asia Citro
My son Clarkson right now a young baby at six months/four months adjusted for prematurity. That said, kids grow-up fast and in this era full of technology (no matter how wonderful it is) sometimes limiting screen-time for our little ones can be a good decision, especially if we have awesome and fun activities for them to do! This book has stuff for everyone from infants to kids 5 and older--as well as some activities I'd want to try--and is invaluable when it comes to generating ideas of awesome stuff we can do with our young'uns. I love the activities that involve making cool creations or doing craft-type stuff as even if I'm not the most art-skilled I still am a fan of doing such things! You can find the book on Amazon at this link. 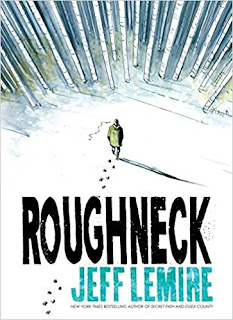 Roughneck
by Jeff Lemire
I've been a fan of Jeff Lemire ever since I picked-up some of his earliest work, the "Essex County," comics he did. He does a wonderful job whether he is writing or illustrating, but I feel he is at his best when he's writing and illustrating. Lemire has worked in a variety of genres from sci-fi to superheroes but here gives us something more realistic in the tale of a man named Derek who used to play Hockey and now is just basically a violent has-been drunk. When Derek's sister, Beth, whom he hasn't seen in years comes to town fleeing an abusive ex its up to Derek just how he wants to handle that situation and Lemire draws us in with his skillful work to make us truly care about these individuals.

The sadness and longing for joy felt by these people exhausted by the trials of life strikes a chord and kept me hooked-into the story up until I reached its conclusion. Lemire also does some fascinating things with color, having the present-day be almost always a washed-out blue with only the color red making an appearance (usually for blood). Scenes from the past that characters remember are illustrated in a lush color however, as if even the most painful of memories are more, "Alive," than being trapped in an unhappy present. I've seen, "Roughneck," listed as being one of the best books of 2017 so far and it wouldn't surprise me if even once we finish the year and much more stuff has come out that it remains proudly on those lists. Roughneck can be found on Amazon or at Things From Another World. 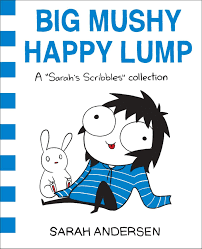 Big Mushy, Happy Lump
by Sarah Andersen
Sarah Andersen's comics may be the kind you often see on the internet as she has a way to make little moments absolutely hilarious. Whether riffing on the comfort-level of sweaters, discussing how self-doubt can be our greatest enemy, or touching upon the way women are treated by society, she is a stellar artist and great producer of hilarious comic-strips.  There were a number of times I found myself chuckling or loudly guffawing at Andersen's work in this book. Sometimes the best way to tackle serious subjects is with some silly jokes, after all. You can get, "Big, Mushy, Happy Lump," on Amazon's site.


Now to Return Everything Before the Late Fees! 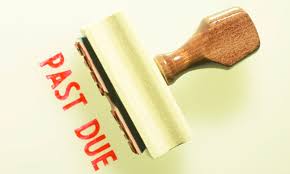 I always am pleased to get stuff from the library, and I encourage you to frequent your local establishment of learning and lending!
Posted by David Charles Bitterbaum at 2:16 PM