Tales From The Dollar Bin: The Question #18

"The Question" AKA My Favorite Denny O'Neil Series of All Time 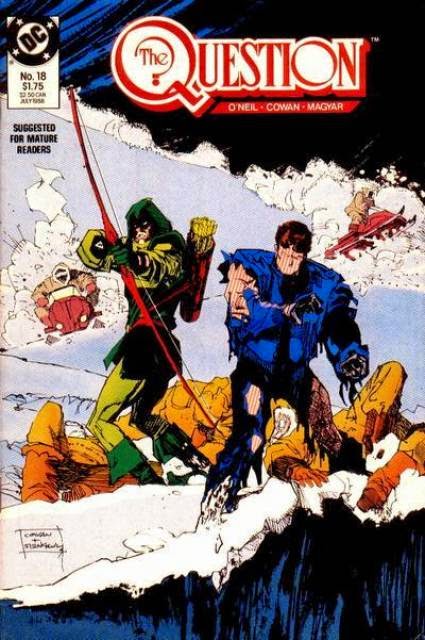 I love The Question. Now, when I say that I mean the version from before the New 52. I have no clue what the Hell DC is doing with the character of Victor Sage and The Question right now. Apparently in this new continuity The Question is some sort of biblical figure from the past who is associated with the Phantom Stranger and that Pandora character whom DC introduced at the end of Flashpoint and then had fighting manifestations of sins...or something. It's all quite a mess. Oh, and there is now also a separate Vic Sage who is running a new iteration of the Suicide Squad in the comics. Whatever.

Now, if I'm so perturbed by the current version of The Question why do I love him? Well, The original Ditko stuff I've skimmed over and been mostly unimpressed by, but the 36 issues written by Denny O'Neil with art mostly by Denys Cowan are just incredible stuff. Now, as they came out back starting in 1987 and I wasn't born until 1988, clearly I have read the issues through methods other than new ones. Yes, I've picked up the trades, but when digging through the dollar bin I stumbled upon one of my favorite issues from the run, #18. 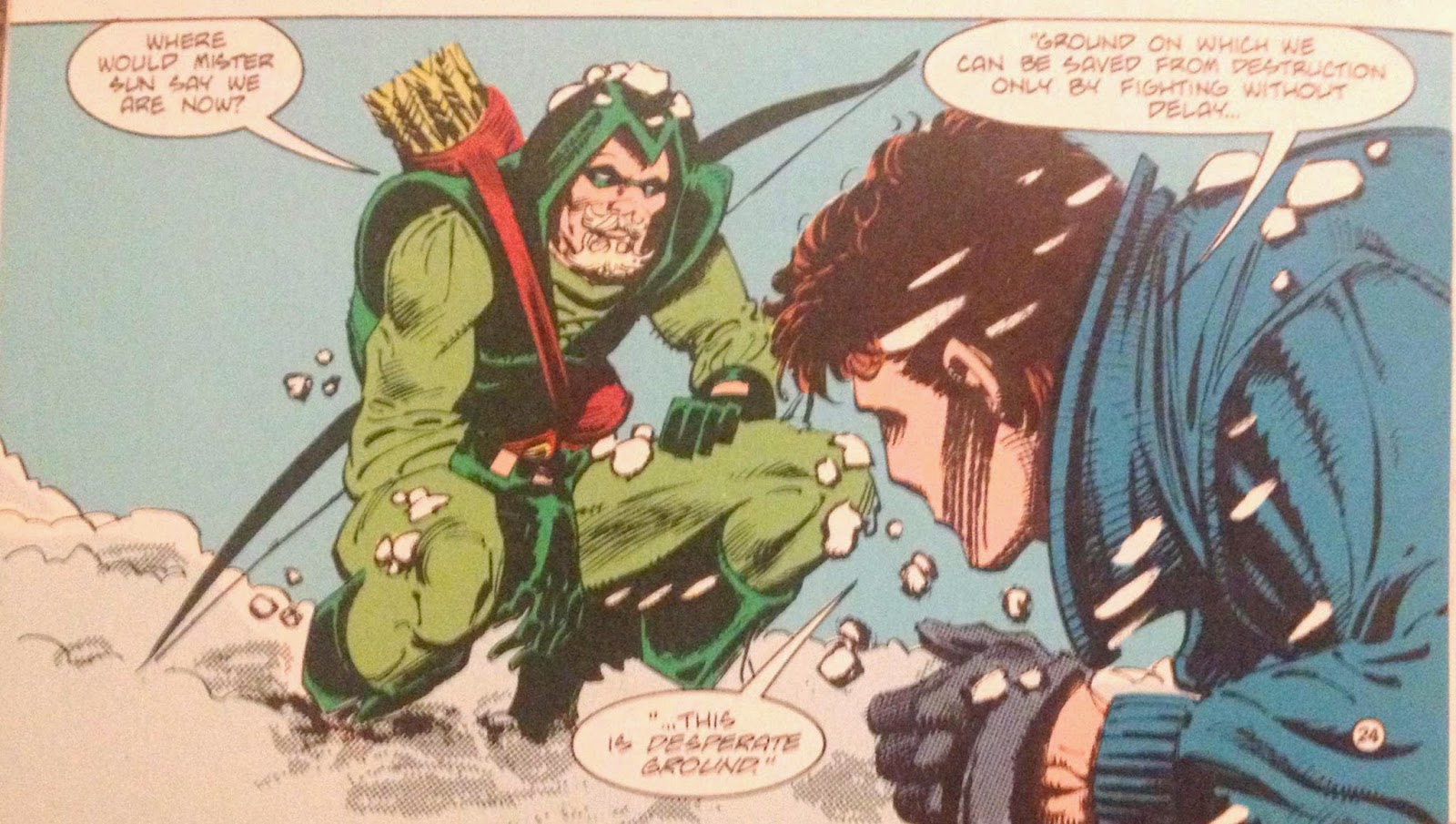 During the run of "The Question" it was a direct-to-comic-shops type comic so it could be more mature with swearing, violence, and sex, but through that it also was able to tackle other adult concepts, often exploring philosophy and Zen Buddhism a fair amount. Basically it was a Vertigo comic before Vertigo was founded (like "Swamp Thing" and "Animal Man") and as that was the case it interacted with the mainstream DC Universe more than later Vertigo Comics did. Hence, in this issue our hero runs into Green Arrow/Oliver Queen as they both are after the same men, a Butch Cassidy obsessed mobster and his side-kick. As Victor had been caught by some of the gang-members previously, he is pleased to be rescued by Green Arrow at the start of the issue but less excited when he learns how Arrow has no clue who Victor's alias is and doesn't quite trust him enough to cut him free from his bonds. 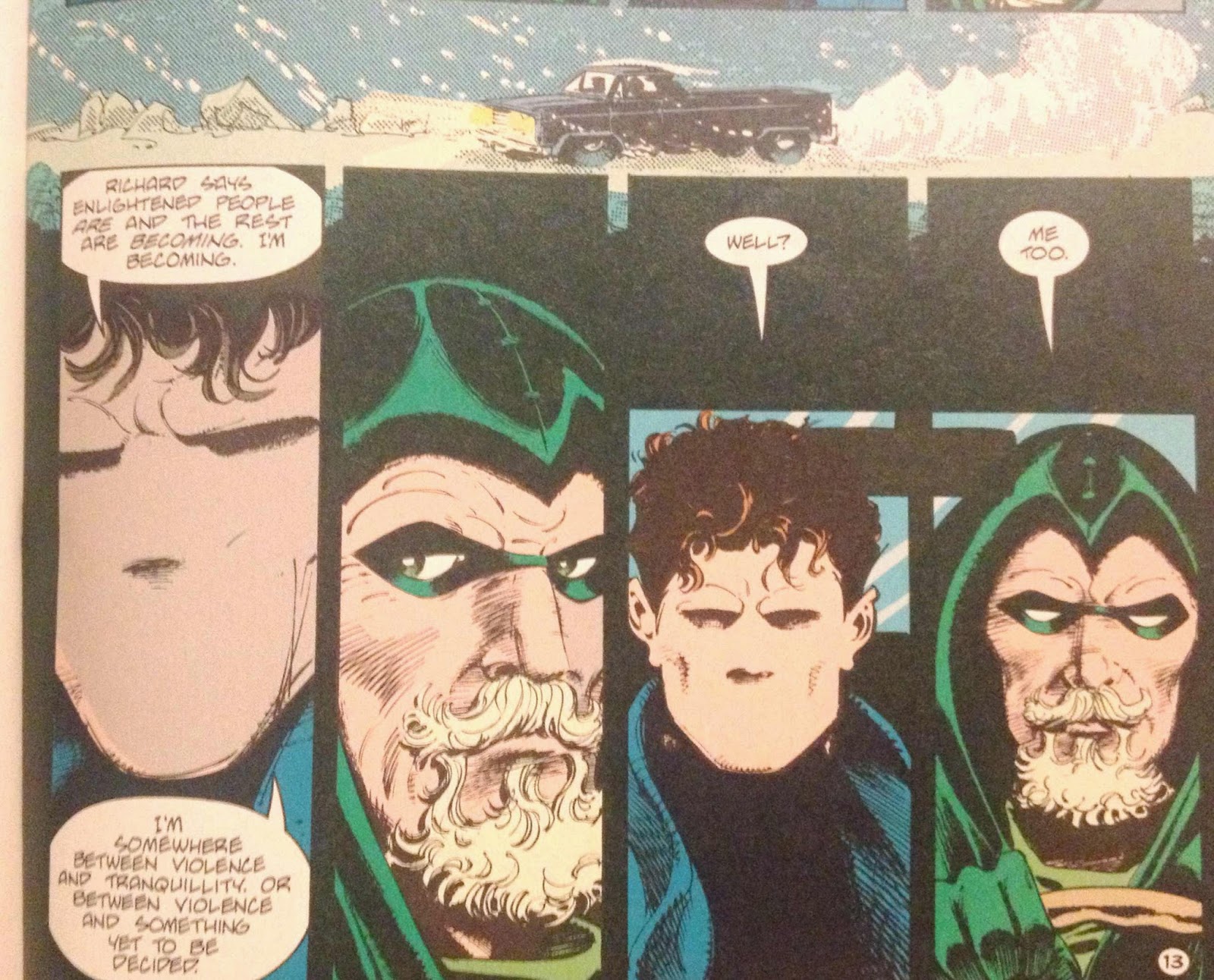 Good stuff for sure.

Denny O'Neil's run on the question was full of fascinating characters and the moments between them, with the cross-overs with the "real" DCU actually helping the comic as opposed to hindering it thanks to how fascinating Vic is in relation to other characters. You have this Zen-warrior from a corrupt metropolitan-area known as "Hub City" and a supporting cast of other folk I haven't even mentioned who are also great--Myra, for one, and it is all just so deep and sad, yet with moments of joy too.

The only other time I saw Victor Sage and his Question identity done proper justice was in "52" where an older Sage teaches fan-favorite character Renee Montoya everything he knows so that she can take his place after he dies of lung cancer. That was fantastic, but nothing tops Sage back when Denny O'Neil and Denys Cowan wrote and drew his adventures. Those times you strike gold on those comics that only cost 100 pennies (plus tax) is why I dig in those countless long and short-boxes that contain these inexpensive joys. Well, I also do it to bring you another quality....tale from the dollar bin!
Posted by David Charles Bitterbaum at 10:08 PM