A Defense of "Age of Ultron"

Note: This is an older article about the "Age of Ultron" comic mini-series. For my thoughts on the movie go to this more recent post.
Court is in Session 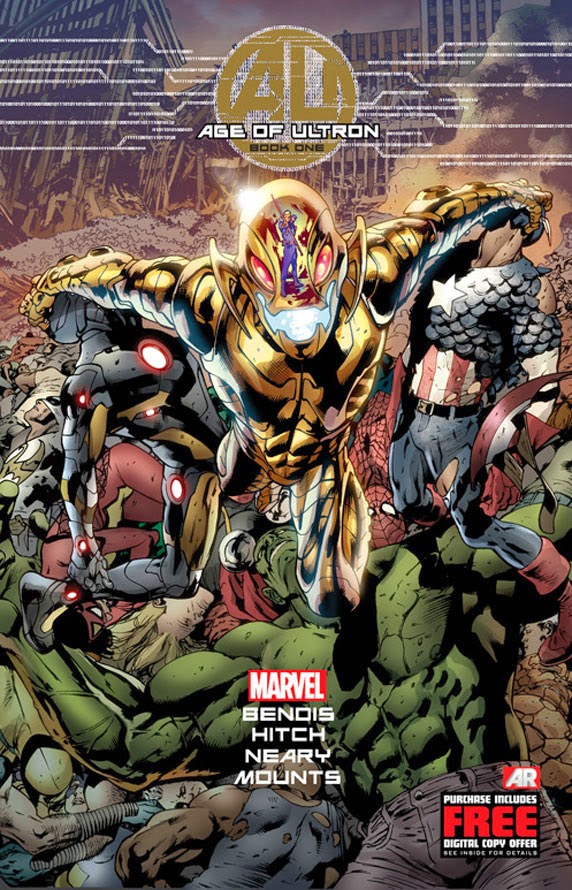 Yesterday the trade paperback for "Age of Ultron" came out, collecting the series along with an extra tie-in issue. A hardcover came out previously with all of the less-important tie-in issues, but having read a variety of those I would argue a person could just read the main series and be fine. The thing about "Age of Ultron" I want to talk about though is a lot of people really don't like it, but I have a secret that I've hinted at on the blog--and that is how I actually am quite fond of this series.

Sure, I've said I "kind of liked it", or "didn't hate it", but I never fully came out and said, "You know what, I really enjoyed 'Age of Ultron' despite its flaws." Well, I'm tired of living in this closet so I felt it was time I officially "come-out" and declare that I am a "Friend of Ultron" as we colloquially call ourselves.

I'm being cute with my metaphors, but the fact still stands I truly did find "Age of Ultron" to be one of the few more-recent event-comics I liked (with "Inifnity" not being bad, and "Flashpoint" being another solid alternate-world tale), but with so many people against it I thought perhaps I should lay out my own defense of the series, making some points about why "Age of Ultron" gets more hate than it deserves, especially seeing as how it does a lot of things just as good as, or better than other event comics.

The Defense Has the Floor
Defense 1: It cleverly already told us the ending well in advance
If you read the Bendis-written (note, the same person behind "Age of Ultron") and Maleev-drawn "Moon Knight" series that ran for twelve issues you know that it it wasn't too amazing, but was a solid  title. You also know a big plot point was Moon Knight finding an Ultron head and the resulting trouble that occurred because of it. The series ended saying how we could see more of Moon Knight in the upcoming "Age of Ultron" mini-series, but once we read it something quite clever was apparent--Moon Knight actually picked up the head of Ultron that disappeared at the end of the mini-series. In an astonishingly clever little twist then we actually we reading an epilogue to "Age of Ultron" that we didn't fully realize tied-in to it until after the event itself.

Some people thought this was stupid, but to them I point out that Grant Morrison basically did the same thing with his "Seven Soldiers of Victory" series of comics, with many characters from that having story-lines or plot-points that weren't as obviously important until "Final Crisis" came about some time later--and folk gave Morrison "mad props" for it, as the kids today say. Why it is cool when Morrison does this but lame when Bendis does I'm not sure, but I thought it was neat.

Defense 2: It acknowledged the Marvel Universe's issues with time-travel
The Marvel Universe has had a complicated history with time-travel. Depending on who is writing a series, or what kind of time-travel technology is being used differing theories have existed. Some argue that if a hero goes into the past and changes it, that just creates a separate time-line and the hero will simply return to their time. Other's have made it so that heroes can go back in time and actually change things, or go to the future, learn what went wrong, and return back to their present to make sure they don't make their mistake, thus preventing one kind of future. It's been messy, and "Age of Ultron" tackled that problem head-on.

At first "Age of Ultron" seemed like it would have the standard plot-point of the heroes trying to fix the past (in this case Wolverine and Sue Storm killing Hank Pym so as to prevent Ultron from being created), returning to the present, seeing things are worse, and then undoing what they changed because they see they just made things awful. That's fine, but a bit clichéd. However, something amazing happens when the alternate-present Tony Stark points out that all this constant meddling with time is in fact hurting it, because time is something that is alive in a way just like us, and with much more mucking-about it could be broken. Wolverine and Sue Storm of course don't listen, and that's when the shit hits the fan, as it were.

Our heroes screw around with time some more, and just when it seems the day is saved, time-and-space begins to freak out, messing with our Universe in a way that sends some entities away (such as Galactus going to the Ultimate Universe), brings in characters from entirely different comic-Universes (providing a clever excuse for Marvel to bring Angela to their comics from the "Spawn"-line), and results in the rest of the Galaxy being pretty mad at Earth (providing some context for "Infinity" and the earlier events of the "Guardians of the Galaxy comic, which also incorporated the just-mentioned Angela). I can get annoyed when it seems like an event just sets up other events, but "Age of Ultron" set up major plot-points in general comics and helped kick-start multiple events--in this case Galactus causing trouble in "Cataclysm" and some of the rumblings of what would lead to "Infinity".

Defense 3: Its flaws actually have an excuse
Look, I'll admit that "Infinity" was arguably much more well-written than "Age of Ultron". It was intricately plotted, with multiple story-lines happening within the series along with the tie-in issues that found interesting ways to incorporate their conflicts into "Infinity" (such as "New Avengers" using it to further their whole story-line with alternate-earth's coming into contact and destroying one another). The thing is, "Age of Ultron" may not have been planned out as well, but its problems actually make it kind of appealing in a weird way. Yeah, certain mysteries pop-up and aren't acknowledged, such as a clear answer of what Ultron actually did to "win", what happened to a group of heroes who went into a future ruled by Ultron, or a variety of other questions.

The thing is, I don't actually mind not having these things answered, because while usually this would be a sign of sloppy writing by Bendis (and possibly still is), the fact that time and space have become broken support the idea that certain things are "out-of-whack". Plot elements such as these maybe weren't forgotten so much as the breaking of the Universe made them a moot point with the formation of so many other conflicts. Almost all stories have continuity problems, "Age of Ultron" actually has a pretty good excuse for its own.

Defense 4: Who doesn't (usually) love a good alternate-world/future yarn?
I love alternate-world stories in my super-hero comics. I thought "Flashpoint" sounded dumb at first, but once I read it and fell into its fascinating world I really liked the comic and some of its tie-ins. "Age of Ultron" is basically one big "What If?", showing us a potential future with Ultron taking over, another time-line with what would have happened if  there wasn't an Ultron, and a finale that actually permanently impacted another popular alternate-Universe (The Ultimate Line). Sometimes stories about alternate worlds or futures can be lame, but when done well I--and it seems many others--seem to greatly enjoy them. I mean, alternate-world stories are popular enough DC is doing their big "Future's End" story that kind of is ripping off "Age of Ultron" (although "Age of Ultron" ripped-off a lot of sci-fi concepts anyways), so Marvel must have done something right.

Defense 5: It's exciting and mostly self-contained (until the end).
For my final defense I simply offer the argument that while other events may be dramatic or "important" in that comic-line's Universe, "Age of Ultron" was just simply really good fun and mostly self-contained. It was a clever idea portrayed interestingly across multiple time-lines, and between the action and often-good art it was an enjoyable read. Some events are so busy trying to be "World-changing" like with the new DC series "Future's End" (which is in an alternate future impacted by events in a nearer-future and the present, I dunno, I'm skipping it because I have eventitis now), or show us how things will "Never be the same" they forget that an event could just be a fun thing that perhaps has consequences, but doesn't have to bill itself as so world-changing that all the comics a company puts out have to tie-in with it.

While the end of "Age of Ultron" resulted in some big changes in a many comics, when the event itself was going on it was pretty self-contained, with some tie-in comics but still being completely understandable if you were to just read the event itself. My other beef with the aforementioned "Future's End" is that it is not only a long-running weekly-series, but will have a whole month of comics that tie-in with it come September--that is just too much for most folks' pocketbooks. "Age of Ultron" was by comparison a relatively brisk 10 issues that came out at quite a good pace in this day and age of major comics seeming to be horribly delayed (with the caveat that while the issues came out fast when the event started, there were horrid delays in it launching). Still, once the comic started it was good, fast, and fun with you not having to buy any other comics than the event itself until it ended and all results of "Age of Ultron" could be followed in the bunch of comics that came in its wake.

The Defense Rests
"Age of Ultron" is clearly not perfect. It has flaws, but it also works at being a fun title with some clever plot-elements and story-telling devices I often enjoy such as alternate futures and presents. Many liked to insult "Age of Ultron" and call it names, pointing out its faults while ignoring its successes. I don't mind those people though, because while they may have a point, I still really enjoyed "Age of Ultron". It holds a special little place in my heart for things it seems nobody likes but me, resting there with purposely-burnt scrambled eggs and the movie "Joe Dirt".

Hate away on "Age of Ultron" all you want, but I hope my list of defenses at least gave you a temporary pause in your barrage of insults. Plus, I think we can all at least agree no matter what that "Age of Ultron" was better than "Fear Itself", another widely-reviled Marvel event. Now that was a piece of trash...at least that's what I'll say until I see someone else post a big defense of it, considering how basically any event has some fan out there, somewhere--and I'm the one for "Age of Ultron" and won't apologize for it.
Posted by David Charles Bitterbaum at 12:15 PM