I've pretty much quit using, "Read More" cuts on my page so that when you come to my site you can just scroll down through everything. I think I should use one in this case though as its a major spoiler for a comic that is out today--and it is earlier in the day so the odds are good you haven't read this yet. Basically, someone is killed off in, "Avengers Versus X-Men," and the fact it is this person is little surprise, and makes me think it won't stick. 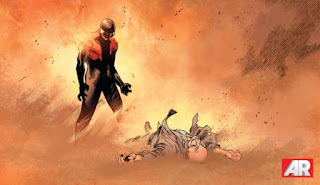 Yup, Professor Xavier apparently bites the big one, for what is now I think the third, fourth, or maybe fifth time for the character to, "die," or be mortally wounded in some fashion. This time however the twist is that Cyclops is doing the killing!

I honestly don't mind character's dying in comics if it fits the story, but it seems like Marvel is just trying to manufacture drama by having one of the original X-Men and arguably Professor Xavier's favorite student, turn out to be the murderer. Maybe I'm just bitter because I like Cyclops and don't care for how Marvel took him from a lame annoyance, to an actually really cool character under Grant Morrison and Joss Whedon (in New X-Men and Astonishing X-Men), to now a psycho-killer.

I just can't wait for AVX to end and this whole Marvel NOW business can start up with what will hopefully be more good comics than bad.
Posted by David Charles Bitterbaum at 9:33 AM