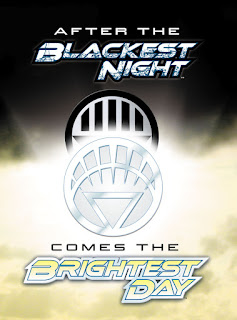 Remember "Brightest Day?" Arguably a quite good mini-series done by Geoff Johns (whose work can be spotty) and Peter Tomasi (a pretty talented person) this basically was what came after the sometimes good and sometimes dreadful, "Blackest Night," event. I've re-read the event in a trade (the 1st one) and my old comics as when it first came out I just kind of skimmed it instead of reading closely. I zoned out a bit around the 7th issue which finally sort-of explained what the point of the series was. Things did pick-up however.

A weekly series (Like the great "52") that didn't actually have the events take place every week (unlike "52"), "Brightest Day," followed some of the characters who seemingly were inexplicably brought back to life at the end of, "Blackest Night," whilst a few other characters who were resurrected kind of did their own thing in separate comics and mini-series. Some of the resurrections were obviously going to happen (Aquaman, Martian Manhunter) a few were out of left-field(Reverse-Flash, Maxwell Lord) and by far the most clever was Deadman, whose whole point of being a character is that he's....well, dead.

One of the most interesting things about reading, "Brightest Day," now is seeing what aspects of the continuity "stuck" in the New 52 and what was changed or essentially dropped. Deadman was still dating Dove (as appears to have ended badly in "Hawk and Dove" and "Justice League Dark", Blackest Night still apparently happened (as shown in, "Green Lantern)," and the Swamp Thing came back from the dead (as shown in "Swamp Thing").

However, Firestorm was completely rebooted along with Hawkman, Martian Manhunter is a quite different person with a vastly altered history with the Justice League, and as for Aquaman...well, this sort of gently started the, "He's a no-nonsense guy who is pretty pissed," style of the character we have in the New 52. Yeah, the New 52 is still a bit of a mess continuity-wise because it chose to keep some things going but re-started most. Also, "Brightest Day," introduced the neat Aqualad! 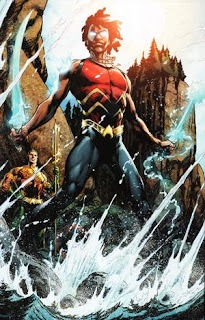 This was a fun series that somewhat made sense as inevitably a fair amount of the characters turned out to not matter much to the main series even if they had their moments in the Big, "Brightest Day #0," issue which kicked things off. Maxwell Lord basically just was important to the Generation Lost mini-series, I have no idea what purpose Jade or Osiris served, and that guy who throws the boomerang really wasn't in the comic at all until at the end when he was needed to move the plot along.

As I've stated, this was all mainly an excuse to bring back Swamp Thing as a guardian of the world (or something) who got rid of the last of Nekron's evil left over from the, "Blackest Night," comics. Also, it brought John Constantine back into the main DC Universe whilst he continued to exist in a Vertigo comic, so kudos to, "Brightest Day," for that. 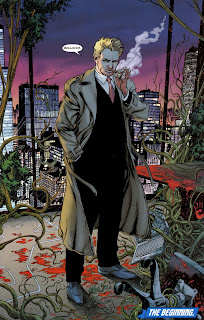 Of course, this was a bit of a false-start for ol' John as even though he is doing a great job as a character in, "Justice League Dark," he was in the terrible mini-series about Swamp Thing that came after this and was--as I stated--just dreadful. Titled, "The Search For Swamp Thing," the plot was thin, the ending was both rushed and stupid, and the whole three-issues just seemed completely pointless other than slightly helping to establish the Swamp Thing and John Constatine in the DC Universe (and drop some hints about "The Green" and "The Rot" that would actually turn out to be important in the New 52's, "Swamp Thing," and "Animal Man," but even that doesn't make this stinker worth a gander). Yeah, this was bad, but, "Brightest Day," was still pretty good even with the nasty aftertaste of, "The Search for Swamp Thing."

As I said, "Brightest Day," was enjoyable. So much happens its hard to describe. From events on Hawkworld that somehow involve the Lanterns who control love, to Aquaman temporarily only being able to control dead sea-life in a disturbing twist, to some actually quite sweet moments between the now-living Deadman and his grandfather--yeah, a lot happens, with some of it being more useful to the overall story than other parts. 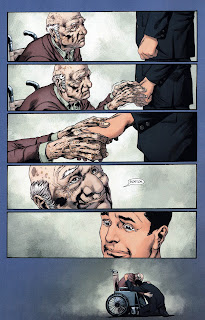 So, the series started out slow, but actually did speed-up, was pretty fun even if at times it did not make sense, and introduced Aqualad, who was pretty interesting considering he was the evil Black Manta's son but worked with Aquaman. One major problem of the story can be expressed though with the character of Black Manta--sometimes the series would have a character appear and then they wouldn't pop up for a bunch of issues. Manta was in the zero issue and I don't think we saw him again until around the ninth issue. Hawkman and Hawkgirl would get most of an issue and then disappear (same with Firestorm), Martian Manhunter has essentially his own cool issue where he's tricked into thinking he's living in a perfect world but isn't...and after that issue his story really just fizzles out.

Besides my complaints, I really did have a fun time, which--with some of the comics coming out these days from DC--is a bit harder to do now (some of the New 52 is leaving quite cold while other parts are fun). I'd give this series a read--although you really need to ingest, "Blackest Night," first to fully understand it.
Brightest Day #0-#24--3.5 out of 5 stars.
The Search For Swamp Thing #1-#3--1 out of 5 stars.
Posted by David Charles Bitterbaum at 9:30 AM