There is the, "Before Watchmen," debacle I've spoken about many times as being an insult to creator's rights and a big, "FUCK YOU ALAN MOORE!" from DC. Well, now DC is being negative toward creators yet again with their announcement of a Black Lightning arc in their pseudo-anthology, "DC Comics Presents." 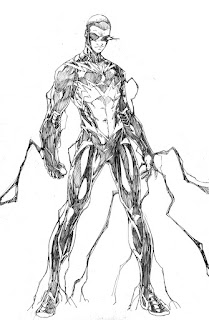 Basically even though Tony Isabella would really prefer DC treat Black Lightining as something he made in partnership with them and not work-for-hire which is clearly appears to be the former instead of the latter, DC is going to just put out some Black Lightning comics because apparently they want to say, "FUCK YOU TONY ISABELLA," between their evil laughs about Before Watchmen.

Seriously DC, do you want me to think of you as evil? Do you want me to seriously consider dropping all DC Comics because I just am feeling like I'm supporting screwing over creators? You do your, "Meet The Makers," campaign as if you care about the people doing your comics, but you don't even call them creators, you just say they are makers.


There seems to truly be a lack of morals at DC and Marvel when it comes to treatment of the people who make their comics--DC has just looked really bad lately with Marvel just getting black-eyes with the whole Avengers-and-Jack Kirby-not-getting-credit-for-the-series-at-first-business. This makes me really sad, and if this keeps up I'm not sure I can really do DC comics if this is their regular behavior. Marvel is on notice too, but man is DC being terrible.
Posted by David Charles Bitterbaum at 10:49 PM