Zombies and Gaming-Magazines.
This post is all about video-games. A fun one based on the popular franchise, "The Walking Dead," and a magazine that discusses them. 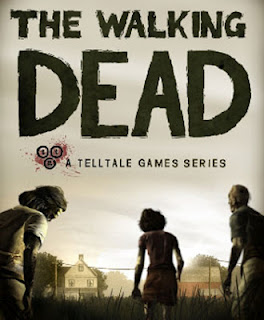 Confession time: I've not watched, "The Walking Dead," television show. That's not too embarrassing, but worse I've only read a very few of the comics. I know what you're saying, "And you dare call yourself a comic nerd and horror fan!" Hate all you want, but I just didn't really find myself that intrigued by the concept of zombies without a twist in this modern day. Romero did such an amazing job with his, "Night Of The Living Dead," and its sequels, along with the clever takes on zombies where they actually weren't zombies such as, "28 Days [or the even better Weeks] Later," films that I just felt I lacked a need for much more zombies.

However, I've known about Telltale games for sometime, and have been aware they put out some pretty good stuff. Their, "Sam and Max," games are known to be quite awesome and other than a misstep with their, "Jurassic Park," attempt which was apparently sub-par, they make quality stuff. Therefore, when I heard they had made a Walking Dead game that had action bits but also clever a use of a dialogue system with many people using a comparison to another game I loved, "Heavy Rain," well...my interest was piqued.
Upon playing the first episode I can say that this is one entertaining, suspenseful, and at times a bit scary game. Playing as Lee Everett, a man going to prison for a crime we are not yet aware of, everything goes to hell (with the zombies appearing and whatnot) and the police car he's in crashes. After encountering some zombies Lee meets up with a young girl named Clementine who it is clear has parents that are not coming home anytime soon. Lee takes her under his wing and we're off on an adventure.

One interesting thing about the game is how it claims your choices will impact future episodes or even moments within the same episode. My decision to lie to someone did get me a stern talking-to from them as they informed me they could see through my ruse easily, and the game at times will have you make life-or-death decisions that appear to have an effect on future episodes, with someone I chose to save popping up in the, "Next time on the Walking Dead," teaser for episode 2 after I beat the first. I did make it clear how these are split up into a form like television episodes, right? Well, its quite snazzy and gives everything a good feel. It may only take you 2 or 3 hours to play through the first episode, but for a cost not too much higher than some comics today it really is worth the money--and yes, you can do a, "season pass," where you buy all the episodes in advance which is handy. 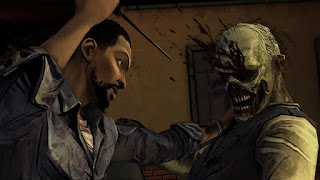 I really enjoyed this, with its mixture of action, talking, and a smattering of puzzles thrown in to keep the ol' noggin working hard. Your character, Lee, is a fascinating man regardless of the words you have him choose, and Clementine is unique for a child side-kick in that she isn't annoying as hell and actually is fun, smart, and interesting. I really enjoyed this and look forward to the next monthly installment. Hey, just like a comic book!
4.5 out of 5 stars.

I Remember When This Magazine Died In It's Prime. Then They Brought It Back As This. 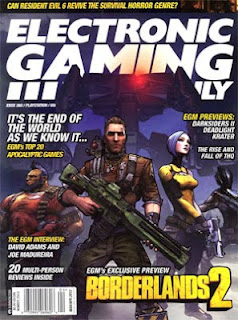 Electronic Gaming Monthly was my favorite magazine for a long time. Then one day the company was bought-out and the magazine suddenly killed. People who worked in the office were just told that day to leave. My issue of EGM about the upcoming Wolverine video-game (which actually turned out to be pretty good) was suddenly the last one to ever hit newsstands.

Then a good time later I one day saw the magazine back on a news-rack, and it was a new issue. How was this possible, I wondered? It had been returned from nothingness, and this new opening issue had a blessing from the old magazine's famous Dan "Shoe" Hsu wishing it well. It was wonderful! Except it wasn't. It was an okay magazine, but it wasn't my EGM I remembered. Yes, they had previews, and reviews, and features like all magazines, and even a fun little section in the back with writer Seanbaby making fun of bad games as the old magazine did, but things were just so different. They seemed too positive about games in reviews--where was that old constructive criticism I loved? Their letters section was too nice compared to the old one which used to rip people apart who needed a good insult, it now was bimonthly/every two months...things were just so different.

So now we arrive at this new issue. They've tweaked things again, adding three reviewers to most reviews as in the days of old (well, in the even farther past reviews had more reviewers, but we won't get technical), moving sections around, and changing the design style. What do I think? Well, it's a fine magazine, and one I enjoy reading, but it still isn't truly EGM as I remember it. Perhaps the magic that magazine carried is just lost forever, with the closet thing to its big bulky issues of gaming-goodness being some of the UK mags that are loaded with info and reviews. Maybe its nostalgia tinting my views as EGM was something I grew up with for years and the old issues are something I still treasure as opposed to other magazines I don't hesitate to recycle. Whatever the case, this is a fine magazine and a nice read, but it just is not what I think of when I think of what EGM truly is...or was.
3 out of 5 stars.
Posted by David Charles Bitterbaum at 3:49 PM