Cold Open
Tonight is the season finale of Glee, this past Saturday was the season finale of Saturday Night Live. The two episodes that ran last week for Glee and the Mick Jagger-hosted one for SNL both carried with them an air of finality for a variety of reasons even if each series will be continuing, if only for the reason that next year they won't quite be the same. Let's discuss. 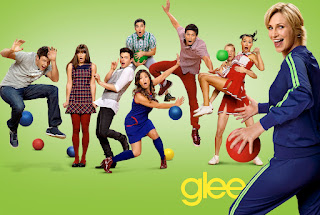 First off, I spoil everything that happens in these two episodes, know that. I started watching Glee early in its third season. My girlfriend would want to watch it and instead of leaving her to view it alone I was nice and viewed it with her. Despite my initial complete lack of interest in a show about the trials and tribulations of high school and involved in singing I kind of enjoyed the program. The only thing I was initially interested in was Jane Lynch's awesome character of Sue Sylvester as I've been a fan of Lynch since she popped up on, "The L Word," and other programs. I was surprised that I didn't hate all the other stuff as I usually have so little interest in stories about high school or teenagers singing today's or yesterday's hits. The plots sometimes are kind of strong however, and I actually would probably like the show even more if it didn't have the singing, as I just really don't need to hear Lady Gaga's music, be it coming from Lady Gaga's mouth or the Glee kids.
Interestingly enough, the episode, "Props," pretty much illustrated everything that can be right with Glee, and everything that can be downright cheesy and terrible. The story with the character of Puck and his dealing with the stress of thinking he's a failure, lashing out, having his story cross-over with the gym teacher (Beiste) who has been in an abusive relationship and realizes she has to leave it--that's the good stuff. Yes, it's pure soap opera, but its well done soap opera. Tell me you couldn't feel a huge surge of tension when Beiste is standing there in the kitchen in that flashback holding a kitchen knife as her husband yells at her, and until she lets go and it falls in the sink you genuinely wonder, "Is she gonna cut a fool?" Seeing characters who are interesting go through tough times in their lives and come out on top despite being underdogs is just great, and I enjoy it. Unfortunately, we also have to put up with the awfulness of Tina and Rachel's tales.
In an almost self-aware meta-textual twist the character of Tina who has done absolutely nothing since I started watching the show to a point where I didn't even know her name till this episode, throws a huge fit. Her fit is about the fact that no one pays attention to her and she is basically scenery. I could almost picture the actress behind Tina having this fit in the writers' room demanding she get more screen-time, as this character really has done nothing. The whole self-aware gag of her character freaking out is fine, but then she hits her head and imagines she is Rachel Berry (and everyone else switches bodies for some weird reason that is a slightly funny joke that gets milked for way too long). This results in her learning a valuable lesson that maybe she belongs in the background and the supposed awesomeness that is the horribly annoying character Rachel Berry pretty much gets, "Yes, you're awesome," told to her yet again. I hate the Rachel Berry character. She thinks she is entitled to everything. She is annoying, whiny, and just bugs me. The character of Kurt is just as talented and doesn't rub our faces in that fact constantly. So yes, this is the downside of the, "Props," episode. This is the stuff that shows Glee at its worst, trying to be cute with fantasy bits and highlighting characters I either don't care about or hate. At least things work out with Beiste.
The other episode that ran as this was a dual-episode was, "Nationals." It had a lot of singing so I zoned out a fair bit. Also Lindsay Lohan appeared as herself in a desperate attempt to revitalize her on-life-support career (did anyone else crack up when the announcer referred to her as, "America's Sweetheart?") along with Perez Hilton--who is looking a lot older than I remember him being. The Glee kids win, everyone is happy, Rachel Berry gets way too much screen time and Puck, Kurt, Quinn, or any other characters I find more interesting get much too little attention. It's still sweet to finally see the team win though. 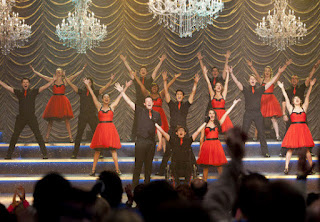 Tonight the last episode of the season will run, and a lot of the characters are going to leave the show/"graduate". It's sad but better to have them leave now while they're popular than wear out their welcome and be in their 40's posing as 18 years-old. There will undoubtedly be an infusion of new characters, and  the show won't be the same. Whether it can still succeed with its new additions and some remaining cast will be seen.
"Props"--3.5 out of 5 stars (The good stuff was so good it most overpowered the terrible).
"Nationals"--3 out of 5 stars (Kind of dull, but it was nice to see the team win).

Saturday Night Live Season 37, Episode 22/Season Finale
For the Season Finale of SNL things were quite definitely switched up a bit. Mick Jagger was both the host and sort-of the musical performer. I say he was sort-of the performer because this was a rare occasion where there were three musical bits, and they all had different people with the exception being a uniting factor of Jagger as a part of every piece. Arcade Fire went first, then Foo Fighters, and lastly Jagger did an interesting and highly political song called, "Tea Party," with Jeff Beck where some stations cut away because he said, "Shit," at one point. Of course, these stations also were in areas that were more conservative and probably didn't appreciate the content of the song, but I'm sure that had nothing to do with it, right? See it here, surprisingly uncut. Jagger also was genuinely funny in the bits he appeared in, such as secret word where for once someone was able to match Kristen Wiig's actress-character's sheer insanity. How did he do this? With his own actor character who portrays macho-men on the screen but is quite clearly barely-in-the-closet. The bit where he attends karaoke as a shy man and people pretend to be Jagger  was funny also. 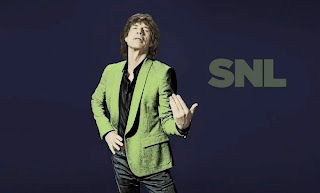 Jon Hamm appeared in the cold open where Kristen Wiig's creepy character who always appears on the Laurence Welk show spoof did her usual thing but this time seemed to actually finally find love with Hamm's character. The things he did to her hands...oh my. Speaking of cameos, Steve Martin oddly popped up toward the end of the show for a blink-and-you'll miss it joke too. 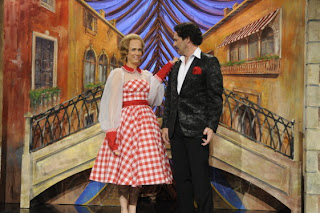 While I'm going to tell you of a saddening departure soon, it is known that Andy Samberg and Jason Sudekis have contracts that are up. As for if they will be on the show next season, that is unclear. What is clear would be how Andy Samberg and crew's digital shorts are still hilarious as this 101st one illustrates with its, "Lazy Sunday 2." At first I was afraid we were going to get a retread, but then the beat switches up, the rhymes get fresh, and I indeed laughed--"Still waiting on a ******* youtube check," indeed. Those last verses from Samberg and Parnell seem kind of final though,"On these New York streets I hone my fake rap penmanship," "That's how it began," "And that's how I'mma finish it." I hope he is around next year just because I love the shorts so much if nothing else. Observe:


Lastly, all this talk of Kristen Wiig getting so much screen time hints at it, and surely enough the biggest news probably was that this was the episode where it was made official she is leaving the cast of SNL, with her being given a send-off by Jagger and friends singing, "Ruby Tuesday," in what started out as a skit but turned into the goodnight-segement (so really four musical bits if you think about it). Everyone in the current cast danced with her and past cast members who hadn't even appeared in the episode showed up to say goodbye to her. It was truly touching and I'm sad she is leaving the show as she was arguably the strongest female presence on the show.
All-in-all this was a pretty strong episode (Stefon showed up in Weekend Update too!) even if some sketches were a bit dull (The Al Sharpton one dragged). It was a decent season with some strong episodes and some weak ones, but I'll most remember the talent that was lost at the end of the season or may be lost depending on who else leaves.
3.5 out of 5 stars (for the episode, it's too hard to give the season itself a solid rating. 3 out of 5 maybe).


Credits
There you go, those are my thoughts about Glee and SNL. I hope the season finale of the former is good tonight and equally hope SNL brings in some good talent next year to try and fill the gap left.
Posted by David Charles Bitterbaum at 5:28 PM