One Was Just Previews For Other Comics, One Was Straight-Up Crazy. So...Yeah. 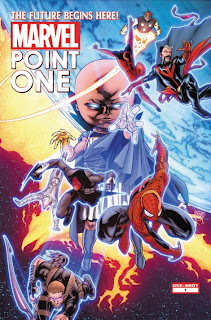 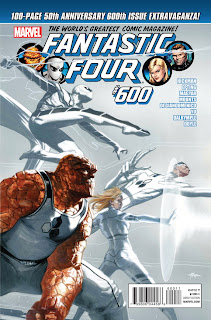 That was interesting. I read Marvel Point One and Fantastic Four #600 and have some thoughts. Yes, they came out a bit ago but I didn't get around to talking about them one here until now and still want to. Sorry for the delay, I baked you these cookies as an apology, but be warned of the five I made, two have poison.

Read This Then Buy The Main Comic--Or Else We Will Cry
You're still conscious, so that must mean you picked one of the "good" cookies. Speaking of something where you get a sampling of options and some of them are really terrible and could kill you, Marvel Point One. You see what I did there? Seriously though, this comic was basically an excuse to show previews for future comics that will coming using a framing device in the form of everyone's favorite voyeur, The Watcher.

It seems some people have broken into his little palace and are absorbing information, which we get to see. Hence, ads--excuse me--stories, to promote a comic set the the Age of Apocalypse Universe, that weird Ultron event Brian Michael Bendis has been hinting at occasionally off and on for awhile, and so forth. The story that actually stands the best on its own is probably the most blatant, "Read the main comic to see what happens next," type-tale, but its so good I don't mind. It's a Doctor Strange yarn and its done so well--which seems hard for most writers (besides Brian K Vaughn when he did that excellent mini-series)--that it's all good. Other stories happen, but they aren't too great, involving new characters whose intro-story doesn't make me care about them at all, Scarlet Spider being a huge dick even though I used to like the character of Kaine (google it, but not the video-game vampire one), and Nova apparently says, "Epic Fail" when planets explode behind him...okay?

Yeah, it was okay, but was really just snippets of stories, or short vignettes that scream, "Buy the main comic, pleaseeee!" and Marvel charged me how much for this--even if some stores sold it at half-price because it was double-shipped? Really, how much? I don't remember. $5.99? God damn that's absurd for something they could give away for free considering its all one big advertisement like those giveaway "sketchbooks" for their event comics. Ugh. 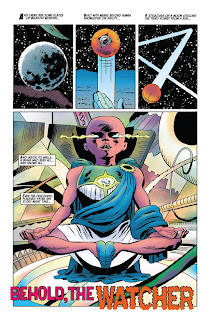 Everyone Loves A Love Story--But Prefers One About The World Ending
You know what I had a ton of trouble understanding because I quit reading the series awhile ago, but still enjoyed a fair amount? I would hope you know because I only mention two comics in the post's title and I just discussed one. For those who need a refresher, it's the 600th issue of The Fantastic Four.

I don't want to spoil it--even though everyone else has. But it's pretty intense with all these plots coming together and twists and a huge reveal that is explained in the second story. Oh, and some other cool tales occur too. There isn't a lot of Doctor Doom in here sadly, and I loves me some Doom, but that's cool.
You know, when I think about it, that Marvel mini-series, "Fear Itself" spent so many issues trying to convince us of some huge threat and that the world was in danger, etc. etc. This issue of Fantastic Four makes you feel the world is in actual danger within a few opening pages, and carries a sense of scope and gravitas that a whole 28 issues of Fear Itself (were there that many? I quit it because I got sick of the damn thing) couldn't summon at all. Jonathan Hickman's writing can be really good to me, or rub me the wrong way something fierce (hence my quitting Fantastic Four awhile ago), but in this thing he is firing on all cylinders.

As I said though, I haven't been reading this thing, so I was kind of lost on some of the finer plot details....okay, most if not all of it. Certain characters were hanging with other ones for reasons I did not know, people were spouting stuff that sounded cool but was over my head...basically I felt like most people do who don't read comics when they try and pick one up. I still enjoyed the heck out of this though, which is speaking to its quality. You know what? Fuck it, I'm going to spoil the big reveal: 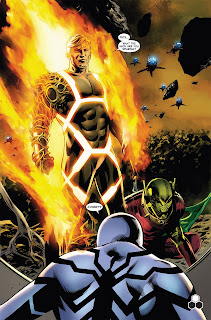 That's right, Johnny Storm is back! Plus, he has a ton of power now, putting the big-baddie from the Negative Zone on his knees before the might that is the Human Torch. Pretty hardcore, eh? That is just so killer, and another instance of what I call, "awesomesauce," in this comic. Plus it only cost me...$7.99? Dear God, $6.99 wouldn't have been too bad for this, but that is just a bit much. Sigh.

Suck Down These High Prices. Seriously, You'll Gasp For Air
We had two comics, both absurdly priced. One was not really worth it, the other....hm. You see, I can't bring myself to say Fantastic Four #600 was worth it because just a cent under eight bucks is so crazy. I guess if you don't mind the steepness you should pick up everyone's favorite super-family trying to save the world. Skip the Point One though, you ain't missing much at all.
Scores Before Taking Into Crazy Cost:
Marvel Point One: 2.5 out of 5 stars
Fantastic Four #600: 5 out of 5 stars

Scores After Taking Into Account The Cost:
Marvel Point One: 1.5 out of 5 stars (Just not worth the price)
Fantastic Four #600: 4.5 out of 5 stars (Still too high, but more worth it).
Posted by David Charles Bitterbaum at 2:18 PM