I Plan To Visit An Art Show This Friday AKA Today
Yeah, I'm gonna see art tonight. Anyways, let's talk about a comic that has been just plain bonkers in terms of its story. It's been twisty, clever, and just plain delightful to read. It's called, "Daken: Dark Wolverine," and since Rob Williams started writing it some time ago its become just a treat. Speaking of treats, a big trade paperback collecting all of Warren Ellis' work on Thunderbolts came out a bit ago. Do my extremely fond memories hold up with everything put together? Yup, it's still pretty awesome. Then, how about we round things out by discussing some fun iPad games? Yeah, this is an annoyingly positive post. I'll make up for it by trying to get something up sooner than later dripping with my somewhat-usual venom.

Daken Can Be Awesome...
When Writers Quit Trying To Make Us Think He's Awesome 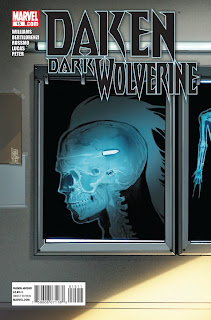 Daken: Dark Wolverine #12-16
Daniel Way was writing the Daken comic, he was trying his hardest to make Daken look oh-so-cool and snazzy. Yes, Daken is a bad guy, and a scheming fellow. Trying to convince us he is some sort of awesome genuis just gets old though. Then Rob Williams came in and started writing the comic in a, "Why didn't anyone else writing Daken think of this?" way. Namely, he made it so that the comic showed Daken as continuing to think he was just the bee's knees and incredibly cool, but we the reader see how he is a pretty delusional guy with some severe daddy-issues (understandable if your Poppa was Wolverine).

Throughout the issues I randomly decided to review for this we see the end and start of some arcs, but really everything has so far been one big story with everything linking together beautifully. Oh, and did I mention that seeing as how Daken is in LA and Moon Knight is there too in his own comic it only makes sense they would cross paths? Yeah, one of my favorite heroes is in this comic too.

What has the plot been? Well, you could start with the "#.1" issue that actually successfully told a single tale and set up the current status-quo and go from there without me spoiling things...but basically Daken is trying to become a big-time Kingpin of LA while also figuring out who a mysterious serial killer is that is murdering people with claws. There is also a borderline-insane FBI agent helping him out when she isn't trying to take him down. Plus Moon Knight, Moon Knight is always good.

This series is great, and it says something that I dropped my Wolverine books during my purge of numerous Marvel books but kept this. Buy it, read it, love it.
4.5 out of 5 stars (for all the issues). 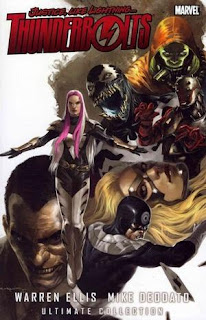 Thunderbolts: Ultimate Collection
There was the Marvel Civil War event where heroes fought heroes about having to reveal their identities and blah, blah, blah. The interesting thing is that Warren Ellis came onto a comic called Thunderbolts and took the idea that some villains would have registered as "heroes" and what it would have been like as the media tried to make them look good whilst they of course crumbled from the inside-out. It was an amazing 12 issues that took forever to come out due to delays that resulted in little one-shots by various other authors using the team on fun little missions--but Ellis was where it was at.

Ellis writing of crazy-people (and the craziest of all, Norman Osborn) combined with Mike Deodato working his hardest to turn in stellar art made just a plain great comic about what exactly heroism is, propaganda, nationalism, and of course really cool fight scenes. It was just plain fantabulous.
5 out of 5 stars

iPad Games AKA Wasting Time When You Should Be Working

I enjoy playing games on my iPad, occasionally I find some fun games worth sharing my thoughts about. Let us discuss. Oh, and note some/most of these can be done on your iPhone too, etc. etc.

Anomaly Warzone Earth
It's available on computers too, but the iPad version is just so fun! We all know "tower defense" games where you build up defenses to fight off attackers, but what about a "tower offense" game where you are those attackers? Yeah, now we're talking! This game is good fun and not too costly so I'd recommend grabbing it!
4 out of 5 stars.

Dark Meadow
Everyone has been talking about this game like its the next "Infinity Blade" and it is quite fun and good. I haven't beaten it yet so depending on how much the story pays off my score is a bit iffy. I'm enjoying myself, but if I feel let down at the conclusion, well pffft.
3.5-4 out of 5 stars depending on how well the tale ends.

ShadowGun
A fun little shooter where you take cover and fire your gun. Think Gears of War but more basic and with a really silly story but pretty good voice-acting. It's a decent time-killer.
3 out of 5 stars.

Where's My Water?
It's really cute and actually pretty challenging. You try to guide water around to assist an alligator in getting some much-needed showering done. Last I checked this was dirt cheap, and again, quite entertaining.
3.5 out of 5 stars.

That's all for now, those should tide you over pretty well though.

To Conclude
You should be reading Daken: Dark Wolverine, Warren Ellis did a great job on Thunderbolts, and the iPad is a fun way to play games even if you have an iPad 1 like me and can't do all the fancy graphics.
Posted by David Charles Bitterbaum at 6:17 PM