A Funny-Yet-Sad Film, DC Comics, And The Most Unpleasant Movie I've Seen In Awhile

Crack Of Dawn
I shall share my thoughts on the drama-comedy 50-50, three DC comics which have their second issue coming out today, and my lack of being impressed or disgusted by Human Centipede 2 so much as just finding it to be kind of miserable. 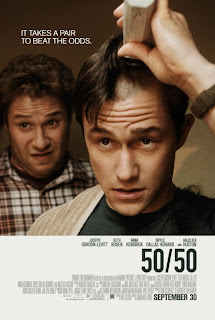 The movie 50-50 has some really funny moments, but I would not say its a comedy. No, its really much more of a drama that has some great humor. First person to say the word, "Dramedy" gets cut as I hate that word. You ought to see this movie so I won't spoil much--as I went in with minimal knowledge myself and found that made it all the more enjoyable. Basically, the character played by Joseph Gordon-Levitt (who has really grown into a great actor) is really young but develops cancer which he has a 50% chance of surviving. Through various trials and tribulations that sometimes involve his funny friend played by Seth Rogen we as an audience laugh, we feel sad, and most of all we actually see a movie that realizes you can actually write interesting characters instead of cliches to make a good film. 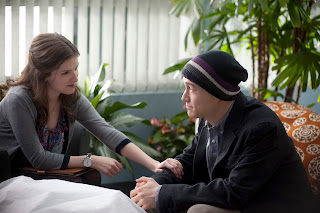 The film is well acted and Anna Kendrick does a great job in it too as the therapist for Levitt's character. I liked this film and as I said, you ought to see it.
4 out of 5 stars.

"You Gotta Learn To Upgrade With The Rest Of Us"

That title is a quote from, "Frankenstein, Agent of Shade #1," which is quite the zany comic if I've ever read one. I mean, it is probably the craziest thing DC is putting out of their new 52 comics and writer Jeff Lemire is clearly having fun. I wonder if all the DC comics, "upgraded" like this some of the complaints lobbed at DC about not doing enough with their reboot wouldn't have been made. It's a fun and zany comic, but out of all the DC comics that have been released Batwoman #1 is by far the most gorgeous even if the plot isn't super-amazing. Seriously though, JH Williams III makes such crazy-good art.


That was pretty lame AKA The Human Centipede 2
So I saw The Human Centipede 2 at a midnight showing at the local indie theater that does zany films late at night. I was not impressed. The whole torture-flick-type-genre normally isn't my thing, but people had been saying how it was so shocking and that I just had to see it...so I did. To be honest the movie doesn't get horribly gross until the last 25 minutes when all the gore and other nasty stuff goes into overdrive, before that the movie almost seems like it could be a bit interesting.

I say almost as it kind of has this message going about this creepy little man that you would never suspect is so twisted for wanting to recreate the movie the Human Centipede. It's like there is a message about how there is always more to people than meets the eye. Oh, that's the one other clever thing in the movie, that it takes place the "real" world where someone is obsessed with the original movie. That meta-element is kind of neat, and the whole creepy-little-man thing is slightly interesting, but the movie never does too much with it. Instead of focusing on the idea of what kind of person would be so crazy as to want to recreate a gross horror movie, The Human Centipede 2 instead just embraces the gross-out value of when he actually does so.

There isn't really a message to the movie, it just gets more and more gross and over-the-top to a point where it is pretty much a parody of itself and torture movies--but that would be giving it too much credit to think that such a thing were intentional. This movie wants to be shocking but I wasn't so much shocked as just finding it nasty and absurd.

Those slight interesting bits save this movie from being utter dreck, but the whole thing was still just an unpleasant experience I wouldn't recommend unless you really have a thing for gross-out torture-movies.
1 out of 5 stars.

Summarizing Thangs
50-50 is a good movie worth seeing, DC has some quality comics that either have a really wacky story, incredible art, or are just all-around solid, and The Human Centipede 2 is a movie you can safely skip even if people tell you its supposedly so shocking and such.
Posted by David Charles Bitterbaum at 3:30 AM