Awesomely Creepy DC Comics, And What's It Mean When The Best Track Doesn't Have The Title Artist? OR Tha Carter IV

Intro
I've read Animal Man and Swamp Thing, and have been pretty impressed. I also bought Tha Carter IV and was...well, not impressed, but not disappointed as it seems some folk who have reviewed the album have felt.

Comics With A Horror Twist 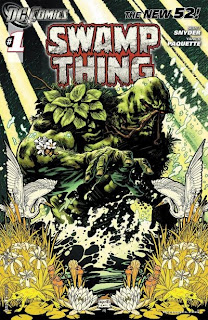 Two DC comics came out which are ostensibly about super heroes, but actually are really more cool and creepy. Swamp Thing starts off sort of slow, but once it wants to be weird, it gets pretty horrifying and twisted. Scott Snyder is a good writer so I imagine he is going to put out a quality product here. I was actually a little thrown by how freaky it was. Also, I haven't fully finished my reading of Brightest Day but I was able to follow along with the story pretty well, so that was good. I guess DC is somewhat serious about the whole "you don't need to know continuity for these comics" pseudo-slogan they have going. The Animal Man comic starts out seeming like more of a straight-up hero tale, with the idea that Buddy Baker is actually living a pretty good life. He has the wife and kids, has been in a movie, and is well-liked by people. The issue opens with him having an interview with The Believer magazine (a real magazine I recommend reading for cool articles) and helping with a hostage situation at a hospital. Then things get weird. 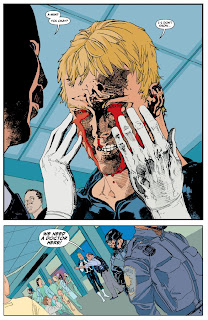 Between the unexplained bleeding and a strange dream at the end of the issue along with a really creepy twist, this comic seems to be taking Animal Man in an interesting direction of creepiness. Jeff Lemire can do some great writing and he has the shadow of Grant Morrison's famous Animal Man run (which was awesome) hanging over him, so I figure doing something different actually is a pretty clever way to go. Plus, Travel Foreman has some great drawing-style in this comic, with it being both expressive and cartoony, but having a touch of the realistic to it. His slightly surreal look works great for the dream sequence especially. 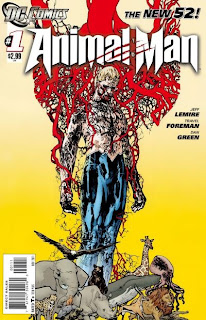 
Tha Carter IV
Even a Lil Wayne who isn't at the top of his game is better than a lot of other music artist out there. That's sort of the conclusion I took away from Tha Carter IV, Lil Wayne's newest release. It's an interesting album, with a weird smattering of tracks--some of which I really enjoyed, only one I truly hated, and a fair amount I was indifferent to. The Intro is decent, "Blunt Blown" isn't bad, "Megaman" and "6 Foot 7 Foot" are good fun, even "Nightmares Of The Bottom" is decent, but God, is that "She Will" song with Drake wretched, just ruining the momentum the album builds up with the earlier songs.

"How To Hate" has some really corny raps, but isn't bad, and then we reach my favorite track of the album, which is simply titled, "Interlude". This song doesn't even actually have Young Weezy appear, instead advertising how it features Tech N9ne along with a surprise apperance by an artist that even the liner notes don't mention appears. Seriously, you would have no clue this person shows up and I was so happy, because it turns out to be none other than Andre 3000 of OutKast, with a killer verse! Tech N9ne and he turn in the strongest raps of the album on this relatively short track, and there is a problem here in that as I said, Lil Wayne isn't even on the song and it's my favorite. What does it mean for your album when that occurs? 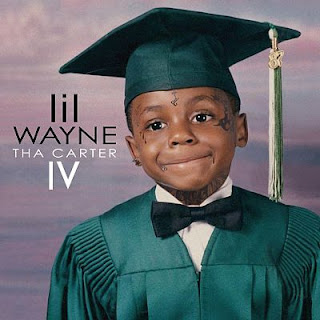 None of the songs after that really stand out to me much, although, "So Special" with John Legend sounds nice on the chorus with Mr. Legend's crooning, and everyone is going crazy for, "How to Love". The Outro is also really solid, but again, it lacks Wayne! Oh, plus the deluxe version has some extra tracks that aren't worth the money other than possibly downloading, "Two Shots" on a legal service, that one is fun.

Listening to this album is a fun time, even if Lil Wayne seems to not be at the top of his game such as on Tha Carter III which many think of as a masterpiece. I didn't finish this album feeling let down, but I also wasn't blown away--except possibly by "Interlude". That doesn't have Lil Wayne though so I don't know how much I can count that. Still, it's a good album and I would recommend purchasing it if you are a fan of Lil Wayne or the hippity-hop music all the kids today love. Lord knows almost all other mainstream/popular rap is terrible.


Outro
Comics and rap music, always a fun time.
Posted by David Charles Bitterbaum at 8:00 AM