DC's New Comic, "The Terrifics," Looks Intriguing and is a Hilarious Jab at Marvel A team of four adventurers who solve cosmic mysteries together. One is a genius, one is a wisecracking jokester, another has an off-putting form and there is a lady who can make herself invisible to the human eye. It sounds like I'm talking about Marvel's team, "The Fantastic Four," but I'm actually discussing DC's new book, "The Terrifics ," which not only looks like good fun but clearly is a hilarious jab at Marvel too.

It is well-known that Marvel has basically forbidden usage of The Fantastic Four as a team in comics due to Ike Pearlmutter (a man with a lot of power in the company) having a vendetta against Fox--who bought the movie rights long ago and which refuses to play-ball with Marvel's film studio the same way Sony did with Spider-Man. It is almost like DC saw this and went, "Marvel won't publish a comic that is Fantastic Four-esque? Shit, we'll do it!" Hence we now have the immensely talented Jeff Lemire (who worked for Marvel for a bit and is now back at DC) writing and the also stellar artist Ivan Reis (and Joe Prado) illustrating. 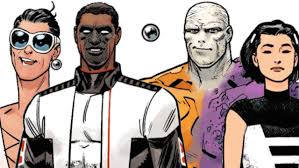 The team isn't an exact copy of the Fantastic Four, with Mr. Terrific being a genius (Mr. Fantastic-ish), Plastic Man being a prank-puller who stretches a lot (so the powers of Mr. Fantastic and Johnny Storm's jokes), Metamorpho altering his form as needed (he could be rocky or made of fire if he wanted like The Thing and with Johnny Storm's powers) and Phantom Girl who is essentially the Invisible Woman/Sue Storm if she wants to be. Together this team is lost in the Dark Multiverse and has to use science-knowledge whilst having zany adventures. So yeah, just think of this as, "DC Presents the kinda-sorta Fantastic Four."

Now, if the comic were just DC ripping-on Marvel and being snarky it would get old fast, but when you have a creative team like the one on-deck I feel pretty confident this book won't be DC simply mocking Marvel, it will be DC doing their own version of a, "Fantastic Four," comic and all the enjoyable aspects that can entail. "The Terrifics ," are currently on the cover of the latest edition of, "Previews," magazine (November 2017) and you can easily preorder yourself a copy at Things From Another World or your local comic shop. I'm excited to see what this book brings and will for sure be getting myself the debut issue!
Posted by David Charles Bitterbaum at 3:19 PM