I got a press release from Big Dog Ink about a new comic called "Sharazad" that included some art, and while I get a variety of press releases from people this was one of those rare ones that caught my eye for more than a cursory glance. Loosely based on the famous tale of the Queen who kept telling her husband tales every night so he wouldn't kill her as he did most brides (Arabian Nights/One Thousand and One Nights), this upcoming release from Big Dog Ink concerns that character and all of her crazy adventures that she told her husband about in that famous story.

It's an interesting concept for sure as you don't see Arabic folk-tales used as much today in modern culture as you do the classic European ones (Hell, the Brothers Grimm would have made a fortune had they come up with their stories today and trademarked them). It has the requisite cheescake-images that Big Dog Ink tends to do, along with some other genuinely cool images. Here's a quick image that is pretty good-looking of Sharazad and some friends traversing the wilderness back in the ancient past: 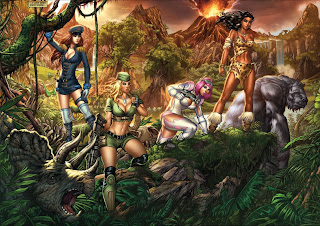 The scientist in me will let it slide that a mammal of that size didn't exist when dinosaurs were around because that is one lushly illustrated page. Even if the women are a bit absurdly proportioned that is still one beautiful picture.

I have no clue if this book will be awesome, suck, or land somewhere in-between on the quality scale, but I have liked other Big Dog Ink projects and would find it encouraging for a story less Euro-history-centric to gain popularity, so it would be nice if this were both good and became popular. Anyways, if you want to learn more I'd recommend reading this interview with one of Big Dog Ink's head-folk, Tom Hutchinson about the book, and you could of course always visit the Big Dog Ink website and look around. Here's hoping the book turns out well and I like it when the full first issue is released.
Posted by David Charles Bitterbaum at 10:25 AM