The Super-Hero as an Aryan Ideal, Jewish Power-Fantasy, and the Question of the Lack of Muslim Super-Heroes 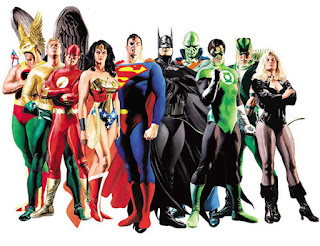 The super-hero seems too often be written about as the Aryan ideal--you know, the Ubermensch AKA Super-Man. He is the epitome of all that is good, white, and Christian. However, I've read in some literature another theory I can agree with, namely that the super-hero often has been a Jewish power-fantasy.

Back in the late 1930s and through much of the following decades, as super-heroes grew in popularity Jews were making these characters (Siegel and Shuster were sons of Jewish immigrants, Stan Lee was originally named Stanely Martin Lieber, the list goes on). Back in those times a Jewish person couldn't get much work because people wouldn't hire them (or the Irish, Chinese, Black folk, or basically anyone who wasn't White and Protestant). Therefore, you got Jews in the few fields they could work in with one being writing and drawing comic books. Characters were imagined who in their "normal" identity were taken advantage of or mocked, but these characters could change. Change into something super.

These fictional beings could become a super-hero everyone looked up to. They transformed from their weak civilian identity into the "mainstream" ideal so that they could be accepted, even worshiped in a way. They had to keep their true-self secret, however. Then there were Jews who would change their name, act a certain way, and hope to be accepted by Christian society, all while hiding their "secret identity" of being a Jew. The common theme is apparent. Imagine being a Jew back in 1938. You would be insulted, spit on, and called names--but if you could simply duck into a phone-booth and become the uber-gentile it would be a power that the greatest effort would be expended on keeping a secret.
Nowadays within America Jews are more accepted (for the most part), but the Muslim population of our nation sure isn't. Simply being Muslim has you eyed with suspicion or threatened with attack in much of America. People don't really understand Islam well in the US other than from limited exposure to the culture in the media--and most of that coverage is quite negative. The US hasn't had a ton of a Muslim population until the more recent decades, so just as other groups were persecuted or feared when they first came to America such treatment is now being given to Muslims. With the way Muslims in the US are being treated I've known some followers of Islam who keep it quite secret. This raises the idea that the Jewish power fantasy of a super-hero could just as easily be thought up by Muslims. Therefore, where are the Islam-inspired super-heroes?

Is it the general lack of Muslim writers and artists in comics that contributes of the dearth of Muslim characters? Yes within DC we have the new Green Lantern Simon Baz and Bilal Asselah AKA "Nightrunner" whom was introduced in "Batman Inc.", plus Marvel has Dr. Faiza Hussain to name one Islamic hero, but all of these characters have been introduced somewhat recently, and if we look back in time there are Muslim characters in comic books but they aren't always portrayed in the best light (it is sad but not shocking to see Muslim villains outnumber Muslim heroes on a database that tracks the religion of various super-heroes). Publishers who aren't necessarily big-names have made super-heroes too--just look to "The 99" for an example of this--but when it comes to the popular US comics full of character and continuity that people love the sad truth is you won't see much of any Muslim representation. Besides the general lack of Muslim writers and artists what else is a potential issue? 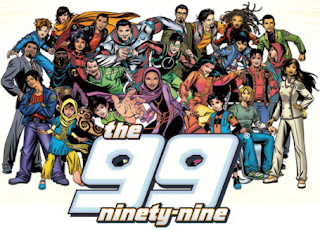 Could it be that the idea of how the Jewish superhero wanted to pose as a gentile makes the idea of a super-hero being openly Muslim counter-intuitive? Openly-Jewish super-heroes such as Kitty Pride or Ben Grimm often have faced discrimination, Magneto himself suffered through the Holocaust due to his Jewish and Roma background. Wouldn't the troubles Jewish characters face in a world that is supposedly more accepting of them make it even more likely a Muslim hero want to keep their beliefs under wraps, one would wonder? For some time readers were never told Ben Grimm (of the Fantastic Four) was Jewish, he kept it secret more or less. How many other heroes could be secretly Muslim but not reveal it (for example sometimes-member of the X-Men, "Monet," pointed out she is Muslim much to the surprise of the current team she is with, X-Factor. Are there heroes just waiting for the right writer to discuss that yes, this character is Muslim--or introduce a new Muslim character?
Part of the reason we may not have writers doing this is they don't understand Islam. This leads to the thought of how if popular culture helped Jews gain acceptance through mediums as varied as television, movies, and comic books, comics could be used as such a tool to introduce Islam to people in way that makes it less scary and more normal in the eyes of the "mainstream" American, but due to a lack of knowledge from the writers it just isn't being done. Comics could show that just as while there are some crazy Christians but most are fine, the majority of Muslims are as pleasant as your Jewish or Protestant neighbor.

The debut of Baz in "Green Lantern" was arguably such a big deal because while there have been some Muslim heroes, being a Green Lantern means you are "known" super-hero to popular culture instead of just being another small-time comic character only dedicated fans of DC, Marvel etc. know about. To be a Green Lantern means you possess great will and the ability to face fear, and when it feels like you are more likely to see a Muslim portrayed as terrible monster in popular culture, having a character who fights against fear is in some ways a big step forward against the scare-tactics our media and politicians have generated within the US about Islam.
In some ways it is apparent how writer Geoff Johns was aware of the cultural views of Islam, as within the first issue of Green Lantern where we meet Baz he accused of being a terrorist due to being in the wrong place, at the wrong time, with the "wrong" religion for America. It also makes sense that once Baz gains the Green Lantern ring it causes a panic among America's security forces, because it reflects how in real-life if someone who followed Islam gained powers much of American society would probably have a fear of him or her wreaking havoc and trying to force Sharia Law on everyone (whereas if a white person in our country gained powers everyone's biggest concern would probably be what color spandex he or she should have for their new hero-costume).

The lack of Muslim super-heroes in US culture is not necessarily indicative of xenophobia or an anti-Islam sentiment  but it sure doesn't help counter the negative perception of Muslims that often seems to be pervasive within America. If a hero whom is Muslim can be as accepted as our Christian heroes, Jewish heroes, or heroes of any other religion that may be a sign of progress.  Just as Jews over time were able to take their "secret identity" public, perhaps before too long Muslims in America will be able to do so also without fear of persecution. Maybe with some more characters like Simon Baz things can be better in America for those who follow Islam. After all, if comics both influence and reflect popular culture, having a hero whom is Muslim make people as excited as one whom is any other religion is a positive thing.

Perhaps it'll just take time, but wouldn't it be nice if instead of decades as it took the Jews to gain acceptance in America, those who were Muslim could feel welcome in the US in a matter of years? Those of us who want happiness and love for all can dream...

Side-Note: Thanks to Farah Wardani of the Indonesian Visual Art Archive for feedback on this big essay of an article. She can be found on twitter at @farahwardani.
Posted by David Charles Bitterbaum at 10:32 PM